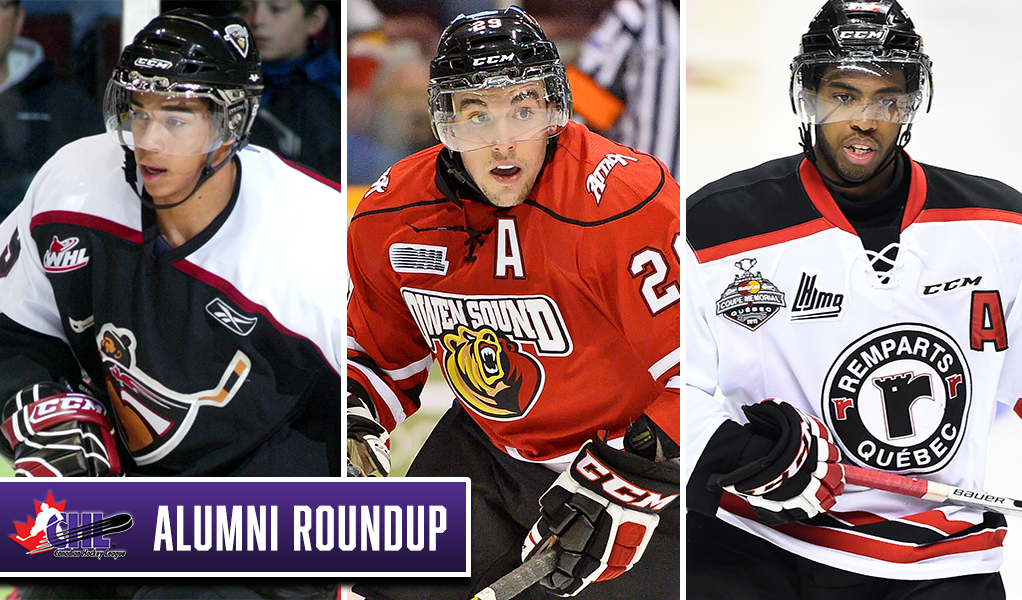 Here’s a look back at highlights of Canadian Hockey League graduates in the news and on social media throughout the month of June.

Conversations about racism, inequality, and social injustice were happening everywhere in June and the hockey world was no different. Evander Kane (Vancouver Giants) was among the current stars at the forefront speaking up, sharing his feelings, and encouraging others to seek meaningful change.

Kane is among a group of seven former CHL players who have formed the Hockey Diversity Alliance which has a mission to eradicate racism and intolerance in hockey. He, along with Akim Aliu (Sudbury Wolves), Trevor Daley (Soo Greyhounds), Matt Dumba (Portland Winterhawks), Wayne Simmonds (Soo Greyhounds), Chris Stewart (Kingston Frontenacs), and Joel Ward (Owen Sound Attack) hope their voices can inspire the next generation of hockey players and fans.

.@evanderkane_9 discusses the establishment of the Hockey Diversity Alliance, which looks to promote diversity and eradicate racism from the sport. #NHLTonight

We are proud to announce the formation of the Hockey Diversity Alliance 🏒✊🏿 pic.twitter.com/TAucuYJxp2

Understanding Black Lives Matter, striving for a better tomorrow, and the power of using your voice were among the messages shared by members of hockey’s black community like Dumba, Darnell Nurse (Soo Greyhounds), and Anthony Duclair (Quebec Remparts).

Anthony Duclair (@aduclair10) speaks up about the power of using your voice. pic.twitter.com/Ertgool3tg

Players, like P.K. Subban (Belleville Bulls), also took to social media to recognize the history of Juneteenth which is the oldest nationally celebrated commemoration of the ending of slavery in the United States.

On June 19, 1865, enslaved people in Texas were free- two and a half years after slavery was abolished in the United States. On Juneteenth, we celebrate Black liberation. #Juneteenth ✊🏿🙏🏿❤️ pic.twitter.com/26jx5fdDfx

June was also Pride Month with a celebration of the LGBTQ community. Players like Kurtis Gabriel (Owen Sound Attack) are among those who are using their platform to make a real difference when it comes to promoting acceptance and inclusion in the game through more than just tape on a hockey stick.

"This goes a lot deeper than just a piece of tape." – @kurtisgabriel

Learn more about the organizations, associations, teams, leagues & communities that promote acceptance and inclusion in hockey at https://t.co/0hbtUROktT. #HockeyIsForEveryone pic.twitter.com/43sd8zcF1n

“Talking and having hard conversations — on the other side of those things is happiness and bliss."@kurtisgabriel backs up his words with actions. That's what makes him the "gold standard" of LGBTQ allies in hockey.

"I love to educate myself more on our people."

One of the annual highlights on hockey’s calendar is the unveiling of the next class of Hockey Hall of Fame inductees which took place in June. Five CHL graduates will be honoured in November including builder Ken Holland (Medicine Hat Tigers), and players Marian Hossa (Portland Winter Hawks), Jarome Iginla (Kamloops Blazers), Kevin Lowe (Quebec Remparts), and Doug Wilson (Ottawa 67’s).

Perhaps the biggest highlight of the month, as it relates to the current state of the NHL season, was the re-opening of training facilities where players like Paul Byron (Gatineau Olympiques), Nathan MacKinnon (Halifax Mooseheads), and Malcolm Subban (Belleville Bulls) got back to work.

Paul Byron (@jpbyron89) doesn't have time for your equipment. 😤

Full training camps aren’t expected to begin until July which has given players a chance to continue staying active at home whether it’s performing shooting drills in the garage like Connor McDavid (Erie Otters), dancing for social media like Ivan Provorov (Brandon Wheat Kings), or biking in the wilderness like Duncan Keith (Kelowna Rockets).

Working on some shooting drills in my garage, my favorite spot to train when I’m home. Wheres you're favourite place to shoot pucks? @CCMHockey pic.twitter.com/2bP0ss5k0i

McDavid was also among the former CHL stars to be recognized in the NHL Fan Choice Awards. He was for best dog with his pal Lenny, while other winners included Jakub Voracek (Halifax Mooseheads) voted best beard, Robin Lehner (Soo Greyhounds) was chosen as the best social media follow, and Marc-Andre Fleury (Cape Breton Screaming Eagles) was awarded best save.

You better believe it, @RobinLehner! You're the #NHLFanChoice award winner for Best Follow.

Marc-Andre Fleury's jaw-dropping glove snag is your #NHLFanChoice Award winner for Save of the Year!

Chris Thorburn has announced his retirement following a 16-year professional career. He got his start with the OHL’s North Bay Centennials where he played for three seasons from 1999-2002 before splitting the 2002-03 campaign with the Saginaw Spirit and Plymouth Whalers. Thorburn’s last season in action was 2018-19 spent primarily with the San Antonio Rampage who were affiliated with the Stanley Cup champion St. Louis Blues.

ICYMI: @sarampage captain Chris Thorburn has retired from pro hockey following a 16-year career that included 251 games in the AHL.

As one career ends, another one begins at the NHL level with forward Kristian Reichel (Red Deer Rebels) signing an NHL entry-level contract with the Winnipeg Jets after spending the last two seasons with the AHL’s Manitoba Moose.

#NHLJets have signed forward Kristian Reichel to a two-year, entry-level contract with an average annual value of $752,500.

All-time leading OHL goal scorer John Tavares has launched a foundation with the mission of helping kids everywhere understand the importance of proper nutrition and embrace healthy lifestyle options that fuel both their passions and potential. The league’s first exceptional player still gives back to the team where he got his start with his JT Junior Generals program in Oshawa.

We are incredibly proud to launch the John Tavares Foundation encouraging families to savour their experiences and each other by discovering different ways to be mindful, active, healthy and together, turning these moments into lifelong memories. pic.twitter.com/f0Y55S8LVl

Another act of charity took place in Kitchener where a collection of former Rangers gathered to wash cars to raise funds for Cystic Fibrosis as part of an annual campaign spearheaded by the team’s play-by-play voice Mike Farwell. Michael Catenacci, Frankie Corrado, Ben Fanelli, Gabe Landeskog, Julian Melchiori, Ryan Murphy, and Ben Thomson all continue to show a commitment to their CHL community.

That’s a wrap! When I asked these guys to help out all they said was, “where and when?” Some things never change. Outstanding people. Good hockey players too. #Farwell4Hire pic.twitter.com/6Wms6T3Cg2

June was also a month of celebration for students graduating from high school and post-secondary studies. That monumental achievement is enjoyed by CHL alumni like Coleman Vollrath (Victoria Royals) who shared his special moment on social media. The University of Calgary grad is one of the hundreds of former CHL players who annually take advantage of the league’s scholarship program to help reach their academic goals.

Exciting day yesterday! Officially graduated from @ucalgary with a first class honours degree @UCalgaryGeog. The last 4 years flew by. Grateful for all of the support from my family, friends, professors, and of course the @WHL @victoriaroyals for the financial support! 📚🎉 pic.twitter.com/77ZykgRzXL