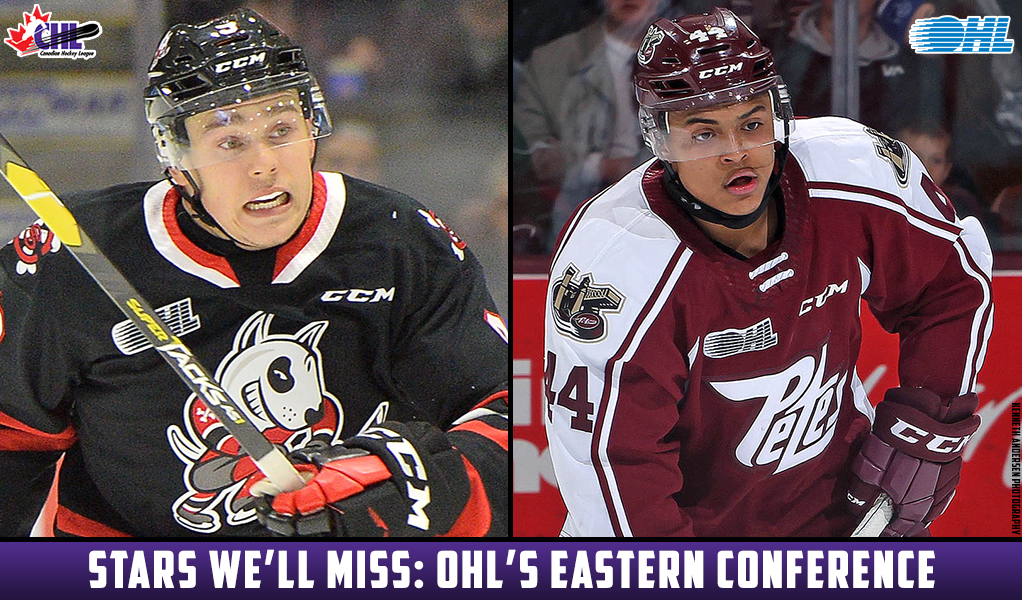 The Barrie Colts will see three overage departures beginning with forward Aidan Brown who played all five of his OHL seasons in Barrie and finished second in team scoring in 2019-20 amassing 47 points through 57 appearances. The native of Newmarket, Ont., has committed to the University of Guelph where he will play for the Gryphons in the upcoming campaign.

Also set to move on from the Colts are Josh Nelson who joined the team midway through the season following three years with the London Knights, and Christopher Cameron who spent all four years of his OHL career with the Colts counting 227 total games.

Another trio of overage players will graduate from the Mississauga Steelheads including veteran blue-liner Liam Ham who served as captain and finished second in scoring among team defencemen this season following a solid 31-point campaign coming in 57 appearances. The 21-year-old will be a member of the University of Guelph Gryphons next season.

Other graduates from the Steelheads include forward Nick Isaacson who will join Ham at the University of Guelph, and fellow forward Calvin Martin also committed to U SPORTS in the OUA Sport conference where he will attend Queen’s University and play hockey for the Gaels.

Our leader on the ice and in the community for the last two seasons. A 6th round pick of @OHLIceDogs in 2015, @liamham24 posted 107 career points in 224 #OHL games including 61 in 98 from the #Steelheads back-end. Congrats on a great career and thank you for everything, Liam! pic.twitter.com/Ch74M6p6Su

Three overage players are set to move on from the Niagara IceDogs headlined by 2019-20 leading scorer Ivan Lodnia who topped the charts with 62 points in only 41 appearances while serving as the team’s captain during the season’s second half. Prior to joining the IceDogs, Lodnia was a member of the 2017 OHL champion Erie Otters. That season he became a third-round pick by the Minnesota Wild and has since been signed to an entry-level contract to begin his pro career in 2020-21.

Rounding out the list of graduates from the IceDogs includes forward Oliver Castleman, who spent all four years of his OHL career with Niagara totaling 254 games, as well as defenceman Elijah Roberts who looks back on a 294-game career split with the Kitchener Rangers as he prepares to join Ryerson University and the Rams hockey program.

"When we bring a player into the IceDogs' family, they know that for the rest of their lives they're a part of this organization and this family." – GM Joey Burke

A pair of overage players are graduating from the North Bay Battalion led by 1999-born forward Shane Bulitka, who after joining the team in early January impressed in scoring just shy of a point-per-game pace with seven goals and 13 assists through 24 contests. The Ilderton, Ont., native closes out his OHL career with 160 points in 259 total appearances made mostly with the Sudbury Wolves.

Also graduating from the Battalion is defenceman Nick Grima (University of Toronto) whose OHL career spanned five seasons with stops in Peterborough and Sarnia and totaled 289 contests.

From a tough competitor to a reliable leader. No one knows the Battle of HWY 17 better than no. 14.

Four players will depart from the Sudbury Wolves highlighted by captain Macauley Carson who set a franchise record for career games played with 304 accumulating 182 points in that time. He’ll continue his hockey and academic interests next season with the University of New Brunswick Reds.

Other graduates include overager David Levin, the Wolves first-overall pick in the 2015 OHL Priority Selection, who amassed 227 points in 259 career games, and Brad Chenier who spent all but 22 of his 263 career games in North Bay and will attend the University of Ottawa when school resumes. 20-year-old Czech-born forward Matej Pekar is expected to begin his pro career within the Buffalo Sabres organization as the fourth round pick in 2018 has been signed to an entry-level contract.

03/20/20, today would have been our final game of the 2019-20 regular season, where we honour our overage players for their dedication, hard work & achievements over their 5 year OHL career.

Thank you, @macauleycarsonn for your commitment and dedication to the Wolves & Sudbury pic.twitter.com/QzzTvNWbLn

Jan Jenik of the Hamilton Bulldogs pushed an impressive point streak to 26 games this season before coming just short in the 27th contest then suffered an unfortunate injury with his native Czech Republic at the World Juniors. The 2018 third-round selection by the Arizona Coyotes has been signed to an entry-level contract and is expected to turn pro next season.

Other graduates from the Bulldogs include overage forwards Bradey Johnson and Isaac Nurse, the latter who closes out his four-year career spent entirely in his hometown Hamilton counting the 2017-18 championship season and most recent 2019-20 campaign in which he served as captain. Defenceman Kade Landry (University of New Brunswick) was also a member of the championship winning Bulldogs and departs with 248 career games and 133 points to his credit.

The Kingston Frontenacs will see three overage players depart, a group that includes captain and veteran rearguard Jakob Brahaney, who closes out his junior career having appeared in 262 total contests with the franchise. The 21-year-old will stay in the Limestone City given a recent commitment to Queen’s University for the 2020-21 season.

Also set to graduate from the Frontenacs are fellow defenceman Nick King who will return to his hometown University of Waterloo and play for the Warriors next season, and 21-year-old goaltender Christian Propp who played in 162 career OHL games.

We would like to congratulate @jakobbrahaney, @NICK_KING9, and @cproppsauce33 on their outstanding regular season #OHL careers!

You three are truly leaders on and off the ice. Thank you for everything you have done for our team and the community!#WeRiseTogether | #GoFrontsGo pic.twitter.com/4JFWJRZT1c

The Oshawa Generals will have a new look next season with no less than three players set to graduate headlined by overage forward Brett Neumann, who wraps up his junior career with an OHL record-setting streak of 311 consecutive games played. The talented forward also led all 1999-born OHLers with 128 career goals.

Rounding out the overage graduates from the Generals includes forwards Cole Resnick (Ryerson University) and Kyle MacLean, the latter who spent all five seasons of his OHL career in Oshawa, including the final two years as captain and spanning 278 total appearances.

We want to send a heartfelt thank you and congratulations to our three OA’s on their outstanding @OHLHockey careers.

Your contributions on and off the ice will always be remembered.

Once A General, Always A General ♥️ pic.twitter.com/N59xcddyB0

The Ottawa 67’s will see five players move on from this year’s squad, highlighted by fifth-year forward Austen Keating who closes out his OHL career with 325 points in 309 total appearances. That’s the most production of any player from the 1999 class and makes him the only 67 in franchise history to eclipse both the 300 game and point plateaus. The 21-year-old has committed to the University of New Brunswick for the coming campaign where he’ll fit in with the perennial powerhouse Reds.

Lastly, the Peterborough Petes could have upwards of six players graduate headlined by deadline addition Akil Thomas, who made a strong impression in collecting 40 points in only 22 games since joining the club in early January. The league’s only 2000-born player to exceed 300 career points (315 in 241 games), Thomas turned into a national hero scoring the golden goal for Canada at the World Junior championship. He’s a signed Los Angeles Kings prospect expected to turn pro next season.

Also expected to turn pro next season are fellow 2000-born signed NHL prospects like 2018 third round pick Semyon Der-Arguchintsev (Toronto Maple Leafs) and 2019 second rounder Hunter Jones (Minnesota Wild) who both spent their entire careers in Peterborough. Other graduates from the Petes include overage forward and two-year captain Zach Gallant, a signed San Jose Sharks prospect, who leaves with an impressive 2,608 face-offs won in maroon and white, as well as defencemen Jacob Paquette (Queen’s University) and Hudson Wilson with 296 and 266 career games played respectively.

The face-off face off: is @zachgally the best of all time?