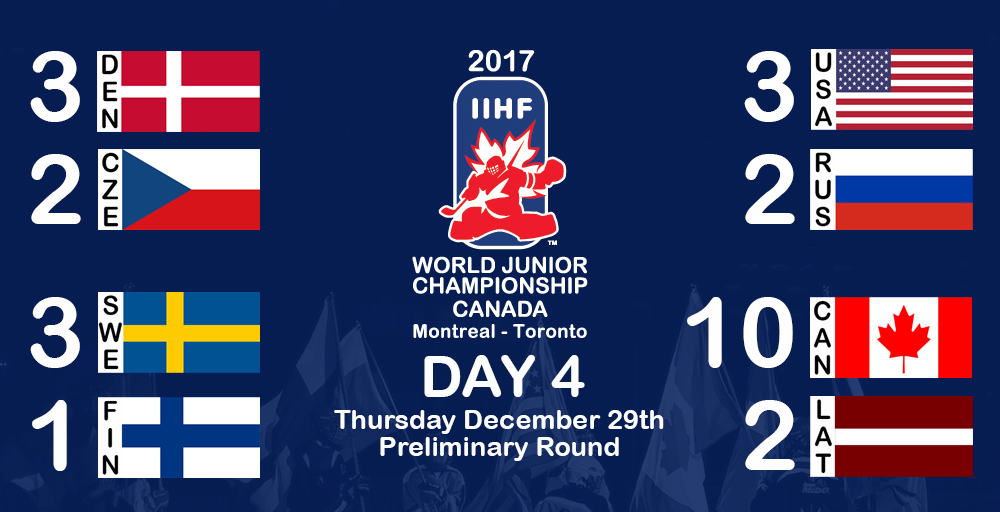 Day 4 of the 2017 IIHF World Junior Hockey Championship saw Canada skate to a commanding win over Latvia while the United States, Denmark and Sweden also came away on top. Here’s a look at Thursday’s action in Montreal and Toronto.

With a perfect 3-0 record, Canada looks ahead to a New Years Eve clash with the United States who defeated Russia on Thursday.

“It’s going to be great playing against them,” said head coach Dominique Ducharme (Drummondville Voltigeurs). “It’s going to be a really intense game. It’s good preparation for getting to the playoffs and those are the kind of games that are going to be played – quarters, semi’s and finals and I think we’re ready for that.”

UNITED STATES 3 – RUSSIA 2
TORONTO – A 25-save effort from Tyler Parsons (London Knights) helped the United States earn their first victory over Russia at the World Juniors since 2007, earning a 3-2 victory at the Air Canada Centre. The U.S.A. outshot Russia 37-27. Yakov Trenin (Gatineau Olympiques) and Sergey Zborovskiy (Regina Pats) both had assists for Russia in the loss. Windsor Spitfires defenceman Mikhail Sergachev was named Russia’s Player of the Game. The Americans take on Canada on New Years Eve at 3:30pm ET while Russia will face Slovakia.
GAME SUMMARY

DENMARK 3 – CZECH REPUBLIC 2
MONTREAL – The Cinderalla story of the 2017 World Juniors continued on Thursday as Denmark shocked the Czech Republic. Mathias From scored 47 seconds into overtime as Denmark took a 3-2 win, improving to 2-1 in the preliminary round. Joachim Blichfeld (Portland Winterhawks) had a goal and an assist for the Danes while Filip Hronek (Saginaw Spirit) scored for the Czechs and earned Player of the Game honours. Adam Musil (Red Deer Rebels) chipped in with an assist in the loss as the Czech Republic outshot Denmark 34-22. The Czechs are now 1-2 in the tournament.
GAME SUMMARY

SWEDEN 3 – FINLAND 1
MONTREAL – Former Mississauga Steelheads forward Alexander Nylander had two goals and an assist as Sweden defeated Finland 3-1 to improve to 3-0 in the preliminary round. Finland outshot Sweden 29-20 as Olli Juolevi (London Knights) recorded an assist in the loss. The Finns drop to 0-3 at the World Juniors while Sweden clinches Group A with the victory. If the Swiss beat Denmark on Friday, the Finns will be eliminated quarter-final contention.
GAME SUMMARY