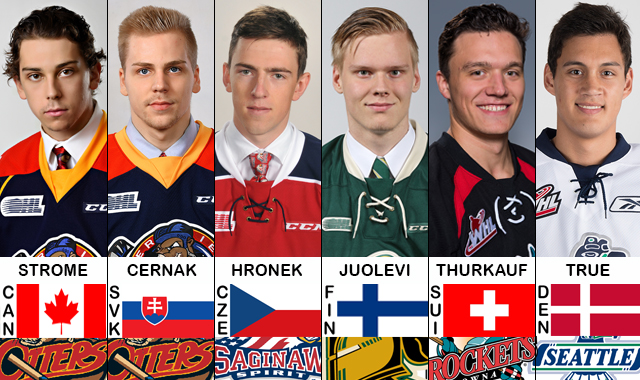 The world’s best hockey talent has landed in Montreal and Toronto for the 2017 IIHF World Junior Championship and the world’s largest development league is once again leading the way.

The Canadian Hockey League is represented at this year’s event by 55 players from 33 member clubs spread across all 10 competing nations, and features an impressive six players serving as captains of their respective entries.

Canada’s Dylan Strome (Erie Otters) is wearing the ‘C’. The well-rounded centreman is a returning member to Canada’s National Junior Team and played seven games early in the season with the NHL’s Arizona Coyotes currently sits third in tournament scoring with two goals, five assists and seven points through three contests. Strome has 16 points (5-11–16) over just seven games with the Otters this season. Forward Mathew Barzal (Seattle Thunderbirds) and blueliner Thomas Chabot (Saint John Sea Dogs) both wear an ‘A’ for Team Canada.

Erie Otters teammate Erik Cernak, a draft pick of the Los Angeles Kings, is serving as the captain of Team Slovakia. The 6’3″, 221Ib. defenceman returns for a fourth time to World Juniors becoming just the tenth player in tournament history to do so after finishing seventh in Helsinki, Finland last year. Big winger Radovan Bondra (Vancouver Giants) is an assistant captain with Slovakia.

Detroit Red Wings draftee Filip Hronek (Saginaw Spirit) is captain of the Czech Republic. The 19-year-old has 23 points (5-18–23) over 27 games with Saginaw this season after being a second round pick by Detroit last summer. Winnipeg Jets prospect Michael Spacek (Red Deer Rebels) is an assistant captain with the Czechs.

Another OHL rearguard in Vancouver Canucks first round pick Olli Juolevi (London Knights) is wearing the ‘C’ for reigning gold medalist Finland. Juolevi, who won a Mastercard Memorial Cup title with London last spring, had an outstanding showing in the World Juniors last year, a tournament All-Star, recording nine assists over seven contests. He has 21 points (6-15–21) over 26 games with London this season. In addition, OHL rearguard Vili Saarijarvi (Mississauga Steelheads) is an assistant captain with the Finns.

From the Western Hockey League, Kelowna Rockets forward Calvin Thurkauf is serving as the captain of Team Switzerland. Thurkauf is second in Rockets scoring this season with 31 points (17-14–31) over 28 games and returns to the Swiss National Junior Team after competing in Finland last year. Thurkauf was a seventh round pick of the Columbus Blue Jackets in the 2016 NHL Draft and was signed to an entry-level contract on Friday.

Seattle Thunderbirds forward Alexander True rounds out the Canadian Hockey League captains as he has led his native Denmark to a surprise start to the tournament. Shocking both Finland and the Czech Republic, True has recorded an assist over his three contests as the Danes have taken a pair of upset victories. True has 19 points (10-9–19) over 31 games in Seattle this season.

The preliminary round of the 2017 IIHF World Junior Hockey Championship continues through New Years Eve on Saturday before Quarter-Final action begins on Monday. The Semi-Final and Medal round contests will all be played at the Bell Centre in Montreal on Wednesday January 4th and Thursday January 5th.