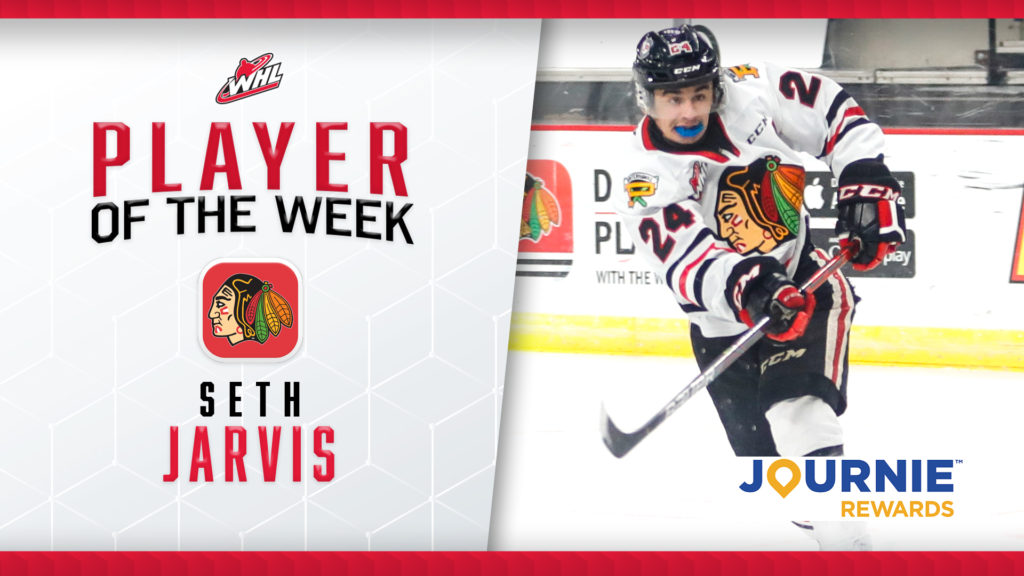 Calgary, Alta. – The Western Hockey League announced today that Portland Winterhawks forward Seth Jarvis has been named WHL Player of the Week presented by Journie Rewards for the week ending May 9, 2021.

Jarvis, a 19-year-old product of Winnipeg, Man., recorded seven points (5G-2A), including a hat trick, in three games played as the Winterhawks went 3-0-0-0 this past week in the U.S. Division.

The Carolina Hurricanes prospect started his week with a three goal performance Wednesday, May 5 in a 7-2 win over the Tri-City Americans, scoring twice in a span of 5:41 in the second period. He was named the game’s first star.

On Saturday, May 8, Jarvis opened the scoring in a 5-1 home-ice victory over the Spokane Chiefs. He then completed his week with a three-point effort (1G-2A) Sunday, May 9 as Portland defeated the Tri-City Americans 9-1. Jarvis tallied his 15th goal of the season 1:34 into the second period, then set up a power-play marker just over four minutes later as Portland collected its 12th victory of the campaign.

In 23 games this season, Jarvis has recorded 25 points (15G-10A). His 15 goals, and nine even-strength tallies are both second-most among Portland skaters. The 5-foot-10, 187-pound forward is also tied for the Winterhawks lead in power-play goals with four.

Jarvis was the first WHL player selected in the 2020 NHL Draft when Carolina picked him in the first round (13th overall). This followed a 2019-20 WHL season in which Jarvis rode the strength of 28 multi-point games to finish second in the League in points (98) and third in goals (42). Jarvis was awarded the Brad Hornung Trophy as WHL Most Sportsmanlike Player. He signed his NHL entry-level contract with the Hurricanes on December 28, 2020.

Jarvis was Portland’s first round selection (11th overall) in the 2017 WHL Draft. Since making his WHL debut in December of 2017, he has recorded 164 points (73G-91A) in 153 career WHL regular season games. He has compiled an additional three points (3A) in five career WHL playoff contests.

Jarvis and the Winterhawks conclude their 2020-21 season Tuesday, May 11 at 5:00 p.m. PT when they host the Tri-City Americans.

WHL
RE/MAX WHL Play of the Year: Matchup #3 – Gauthier vs. Nielsen
16 hours ago