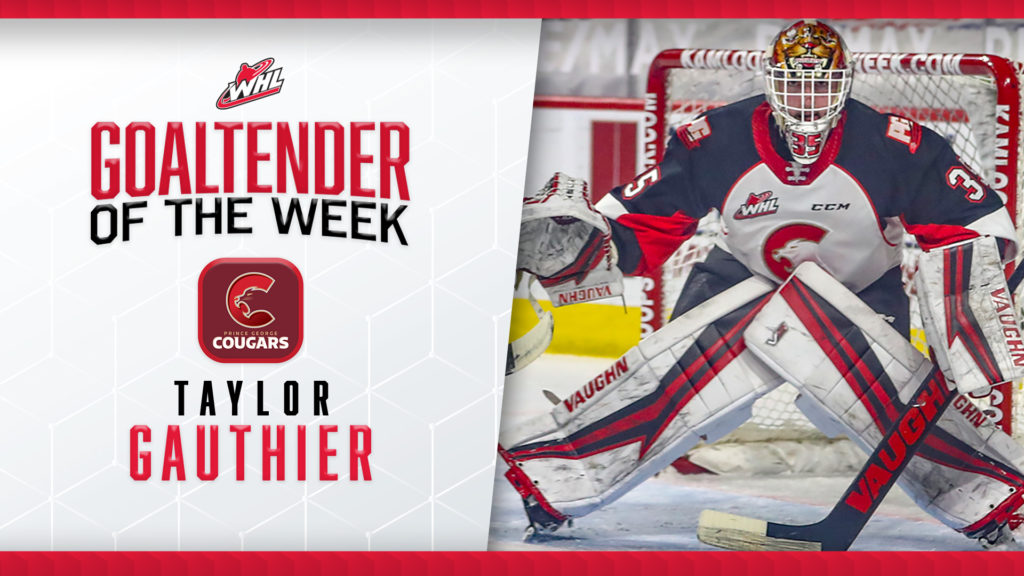 Calgary, Alta. – The Western Hockey League announced today that for the second consecutive week, Prince George Cougars goaltender Taylor Gauthier has been named WHL Goaltender of the Week for the week ending May 9, 2021.

On Tuesday, May 4, Gauthier was the game’s first star in a 29-save effort against Kelowna. Gauthier parried away 11 of the 12 shots he faced in the third period as the Cougars held on to defeat the Rockets 2-1.

Gauthier then turned aside all 26 shots he faced Wednesday May 5 in a 3-0 win over the Vancouver Giants. It was the 6-foot-2, 208-pound netminder’s first shutout of the season, earning him his second first star honour in as many nights.

Gauthier closed out the week Sunday, May 9 by stopping 23 of 25 shots in a 2-1 setback to the Kelowna Rockets.

Gauthier was originally selected by Prince George in the first round (ninth overall) of the 2016 WHL Draft. He has appeared in 151 career WHL regular season games, all with the Cougars, securing a record of 46-81-8-8 with a 3.22 GAA, .904 SV% and six shutouts.

Gauthier and the Prince George Cougars wrap up their season Wednesday, May 12 at 7:00 p.m. PT when they take on the Kamloops Blazers.