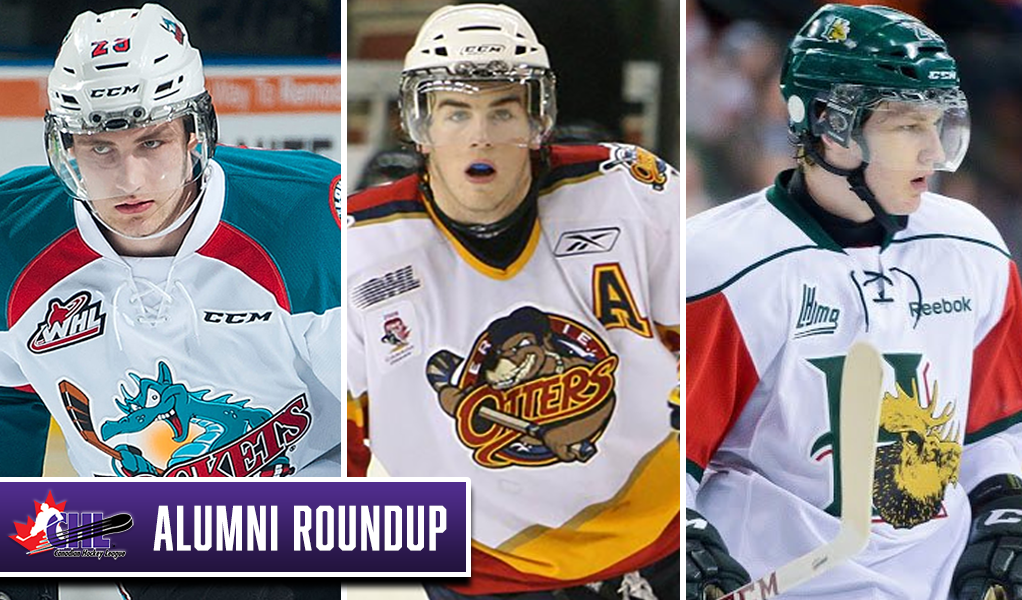 Here’s a look back at highlights of Canadian Hockey League graduates in the news and on social media throughout the month of July as the NHL returned to action.

368 former stars from across the Western Hockey League, Ontario Hockey League, and the Quebec Major Junior Hockey League were listed on NHL rosters for Phase 4 of the league’s Return to Play plan which features Stanley Cup Qualifiers. This figure represents nearly 50% of all players across the 24 competing teams.

Is that you, @GrittyNHL? 😂 #StanleyCup

Excited to be with this group going to Toronto! @capitals pic.twitter.com/PBsSSdbstl

Before the puck officially dropped, the Edmonton Oilers used their final practice to pay tribute to the late Colby Cave (Swift Current Broncos) by wearing number 12 sweaters that would be auctioned off to help raise money for a Memorial Fund.

The recently formed Hockey Diversity Alliance, lead by co-heads Evander Kane (Vancouver Giants) and Akim Aliu (Sudbury Wolves), released a powerful video with faces from all over sport who share their mission to eradicate racism and intolerance.

The great work by recent CHL graduates Akil Thomas (Peterborough Petes) and Elijah Roberts (Niagara IceDogs) who started sharing their unique perspectives of the game to fans over the airwaves has been recognized by the NHL. Their podcast, Soul On Ice, has been added to the NHL’s digital lineup and will now reach a much wider audience on a weekly basis.

Some of the biggest hockey news in July was the unveiling of Seattle’s new NHL team identity. The Kraken, who will become the league’s 32nd team for the 2021-22 season, was met with rave reviews by Thunderbirds alumni like Brenden Dillon, Brooks Laich, and Nate Thompson who shared their love for their time playing in the Pacific Northwest.

Playing 4 years of Junior in such an amazing city, it’s long overdue but really exciting to see @NHLSeattle_ made a reality! Best of luck except for when they’re playing us @Capitals of course 😏 Everyone will find out soon enough that Seattle is a Hockey Town! pic.twitter.com/IW95gryOLd

Congratulations to @NHLSeattle_ on announcing their new team name the Kraken! Having spent 2 years playing in Seattle for the @SeattleTbirds, I always thought an @NHL team would thrive there! Excited for the people of Seattle, you deserve this!!

Welcome to the league @NHLSeattle_ and congratulations to the city of Seattle. It was a great spot for me with the @SeattleTbirds and extremely happy for the northwest to have some more hockey! pic.twitter.com/5VUma2mr5o

Kitchener Rangers alumni Ben Fanelli and Jordan DeKort will also be sharing experiences from their time in the CHL but as part of a new Mentorship Program recently introduced by the OHL club.

Adding to the many tremendous team and league-wide resources available to Rangers players, we're proud to announce former captain Ben Fanelli and Jordan DeKort as the inaugural mentors of our new Alumni Mentorship Program.

It was a relatively quiet month for transactions however a trio of former players inked entry-level deals including 2019-20 overage goaltender Jiri Patera (Brandon Wheat Kings) who signed with the Vegas Golden Knights after being a sixth round pick in 2016. Another former Wheatie Logan Thompson is also Vegas bound following a pair of minor pro seasons, while Pius Suter (Guelph Storm) joins the Chicago Blackhawks after five pro seasons in Europe.

What a great feeling to have signed my first NHL contract with the @vegasgoldenknights I’d like to thank everyone who supported me along the way pic.twitter.com/k6kvxgPVEP

We have signed goalie Logan Thompson to a two-year entry-level contract! #VegasBorn https://t.co/ANAVQ6jASP

Another 2019-20 captain, Luke Boka, will turn pro next season opting to join the Fort Wayne Komets of the ECHL where the former Memorial Cup champion and Windsor Spitfires all-time games played leader will skate alongside his brother Nick.

Luke Boka (@Lboka12) spent the last 5 seasons with @SpitsHockey of the OHL, setting a franchise record for most games played at 313 games. pic.twitter.com/TRW8UBVa1q

Eight former @TheWHL players have committed to continuing their hockey careers with @DinosMHKY.

Ravens Men's Hockey is excited to announce the commitment of Oliver Castleman (Winger – Ottawa, ON) 🏒 #FearTheConspiracy

Castleman spent 4 years in the OHL with the @OHLIceDogs posting 40+ pts in 3 of those seasons. pic.twitter.com/9fl5apPqo0

We are thrilled to welcome these three forwards to round out our recruiting class for the upcoming season!

The thoughts and prayers of the entire CHL family are with two-time Memorial Cup champion Dale Hawerchuk (Cornwall Royals) as he continues his courageous battle with cancer. The Barrie Colts coach took a leave of absence prior to the start of the 2019-20 season to undergo treatment and in April had gone through what was believed to be his final round of chemotherapy before the latest resurgence.

My dad is back in his fight against cancer due to a resurgence of this terrible disease. We are praying for him and he will continue to fight hard ❤️#HawerchukStrong

Our website is officially live. Visit https://t.co/liZEummrSH to support Dale Hawerchuk in his fight against cancer and raise money for causes that are important to Dale and his family.

"We as an organization are here to support him. We wish him all the best in his fight. He’s one of our family, and we’re with you, Dale."

The Jets have Hall of Famer Dale Hawerchuk in their thoughts as the team prepares to return. (@WiebesWorld)https://t.co/PF3RtlauqL

NHL fan favourite Eddie Shack sadly passed away at the age of 83. Before winning four Stanley Cups as a member of the Toronto Maple Leafs, ‘The Entertainer’ was a member of the Guelph Biltmore Mad Hatters where he played five seasons from 1952-57 producing 219 points.

The NHL mourns the passing of four-time Stanley Cup champion Eddie Shack. A fierce competitor on the ice, Shack was a perennial fan favorite whose personality earned him the moniker “The Entertainer.” https://t.co/vnkGzmiwl2 pic.twitter.com/wS12vXYEJ1

Several CHL alumni have been named finalists for NHL awards including Leon Draisaitl (Kelowna Rockets) and Nathan MacKinnon (Halifax Mooseheads) who are in the running for MVP honours as chosen by the media and players with Hart Trophy and Ted Lindsay Award considerations.

The players have voted and the results are in!

Your 2019-20 #TedLindsayAward finalists are Leon Draisaitl, @Mackinnon9 and @artemiypanarin. All three top vote-getters are seeking their first TLA: https://t.co/2z2c05bbA6 pic.twitter.com/MU1ePPtqtM

John Carlson (London Knights) is a finalist for the Norris Trophy awarded to the league’s top defenceman.

2019-20 Norris Trophy finalist: John Carlson@JohnCarlson74 is a Norris nominee for the first time and can become the first @Capitals player to win the trophy since Rod Langway had back-to-back wins in 1982-83 and 1983-84. https://t.co/8f0wJ9Bq4n #NHLAwards #NHLStats pic.twitter.com/4maW4ZZvxr

Bobby Ryan (Owen Sound Attack) is a finalist for the Bill Masterton Memorial Trophy for exemplifying qualities of perseverance, sportsmanship, and a dedication to hockey.

#Sens forward Bobby Ryan has been named one of three finalists for the 2019-20 Bill Masterton Memorial Trophy!

MacKinnon and O’Reilly are both finalists for the Lady Byng Memorial Trophy awarded to the league’s most gentlemanly player.

Nathan MacKinnon (@Mackinnon9), Auston Matthews (@AM34) and Ryan O'Reilly are the three finalists for the Lady Byng Memorial Trophy! #NHLAwards

Dominik Kubalik (Kitchener Rangers) is a finalist for the Calder Memorial Trophy for rookie of the year.

The @NHL has announced the 31 team nominees for the 2019-20 King Clancy Memorial Trophy. https://t.co/FupLpsuIgA pic.twitter.com/Z379V56Zaw