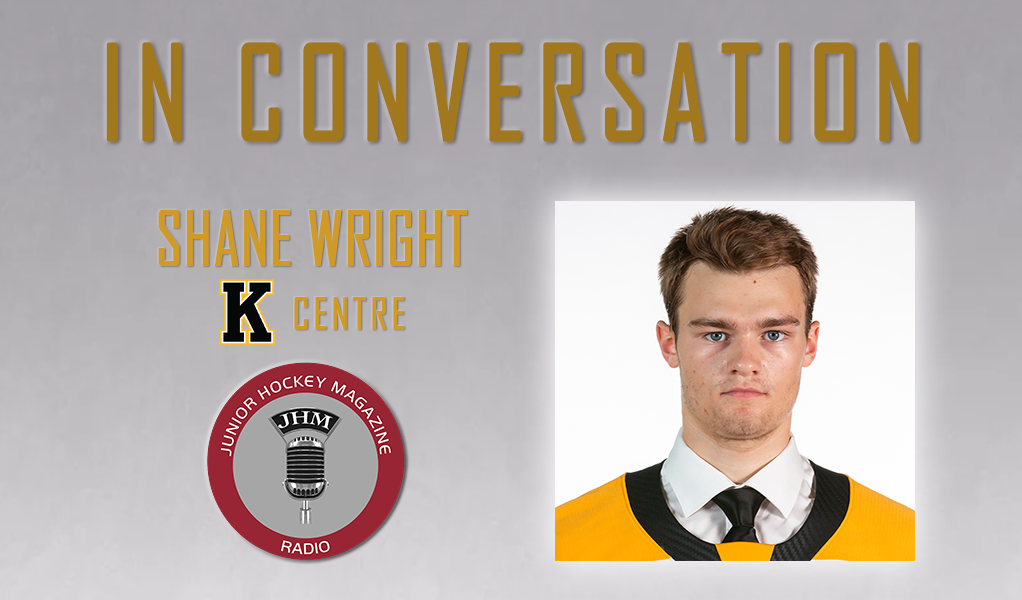 Shane Wright is having a truly phenomenal season.

Skating as a 16-year-old with the OHL’s Kingston Frontenacs, the tantalizing talent has undoubtedly proven his worth as only the sixth player in Canadian Hockey League to have been granted exceptional player status. As the season enters its closing weeks, Wright has the Frontenacs within striking distance of a playoff berth thanks to his offensive heroics that see him lead all freshmen with 66 points on the season, good for a 24-point edge on the next highest rookie scorer.

Wright recently sat down with Junior Hockey Magazine to discuss his experiences skating in first season in the OHL, how he has found the adjustment to major junior, and what’s it like to hear comparisons to NHL superstar and Erie Otters graduate Connor McDavid:

Junior Hockey Magazine: There were some question marks when you came in with exceptional status as you were the only 15-year-old in the league. Clearly, it has gone really well for you. What’s made the adjustment so much easier for you?

JHM: You’re leading the Frontenacs now with 66 points in the first 55 games. Where is that compared to what you thought you would be able to do?

SW: I’m not sure where I thought I’d be. Coming into this year, I didn’t really have any expectations for myself. Obviously I wanted to produce and help make a difference on the team, but I have just been taking it one game at a time and not looking too far ahead in the future, and taking it from there.

JHM: What was the biggest adjustment for you?

SW: Bus trips are different. Long bus rides and having to play the same day, obviously it’s difficult. Also, going to a new school with new people, new teachers, as well as playing hockey in a new league with bigger and stronger players. The game is faster and it is better, so I think all of that was really an adjustment for me.

JHM: You know there are going to be comparisons. Connor McDavid was one of the first players to be given exceptional status. Through 55 games in his first season in the OHL, McDavid had 56 points. When you hear numbers like that, and that you’re actually outscoring him to this point, what does that do to your mind?

SW: That’s pretty cool just to see where he is, the career he has had, and how successful he has been. To be able to have more points than he did at this point, that’s pretty special. It’s only one year so there is still a lot of hockey left to be played and a lot of years.

JHM: Earlier this week, you scored your 36th goal of the season to tie Bernie Nicholls for the most goals by a first-year Frontenac. How cool is it to hear something like that?

SW: That was pretty cool. I’m not old enough to know exactly who Bernie Nicholls is, but just to have that honour to be tied for the most goals for Frontenacs rookie scorers is obviously pretty special.

JHM: I was recently talking to a scout who said, ‘When you talk to Shane, you sometimes think you’re having a coffee with a 40-year-old. He is just that mature.’ How important was that and where does that maturity come from? Is that something that was instilled in you by your parents or just something that came naturally?

SW: I feel like that is just the type of person who I am. I have always been ahead of the curve, and physically more mature as well where I played up an age in hockey my entire life so I have had to grow up quicker than a lot of kids my age. I have had some experiences at my age that a lot of kids may not have been exposed to so I think that is definitely a big part of it.

JHM: You’re wearing No. 51. Whenever someone sees an usual number like that, they think, ‘Where did that come from?’ What’s the significance of that?

SW: My birthday is the fifth day of the first month so that’s where it came from – January 5th.

JHM: Last year when you played for the Don Mills Flyers, you guys only lost one game. This season, the Frontenacs had just one win in your first 16 games. What were you able to learn from this process and that experience?

SW: It taught me a lot. To play from behind and being down a couple of goals, you’re still coming out every shift and trying to make a difference, trying to create chances and offense, play the right way, and just stay positive. If you lose a game by a couple of goals, I just try to focus on the stuff I can control and how I played.

JHM: How much are you enjoying your rookie season in the OHL?

SW: I’m loving it. Every second, I am loving it. There is honestly nothing so far that I haven’t loved.