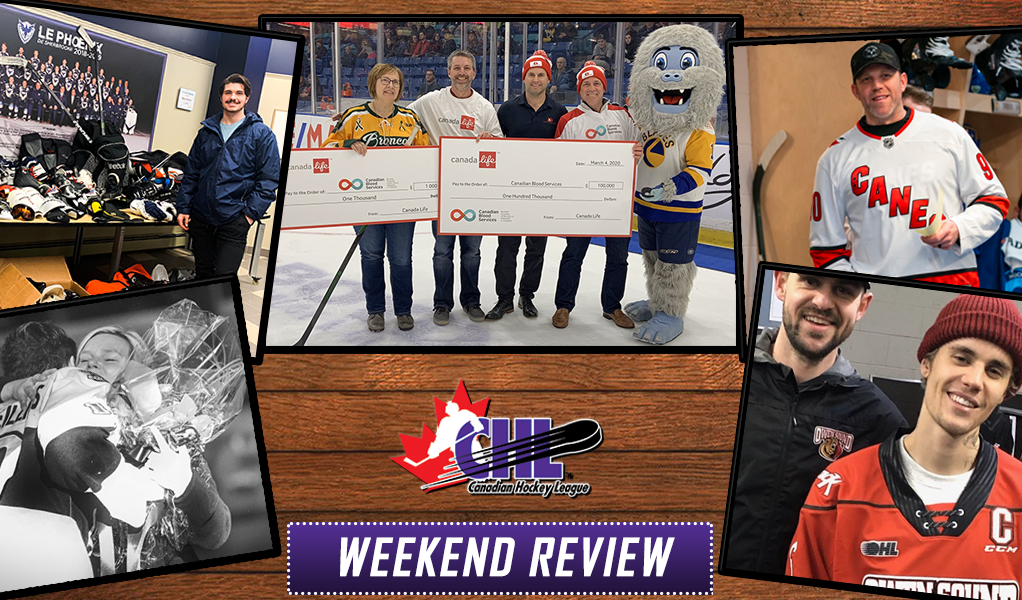 The first full weekend of March was also the third to last for the Canadian Hockey League’s regular season schedule and featured its share of special moments on and off the ice.

Here’s a closer look at it all:

While Canada Life is a presenting partner for 31 game nights this season in various communities across Canada, last Wednesday night in Saskatoon was extra special. Canada Life invited Carol Brons, the mother of the former Humboldt Broncos Athletic Therapist Dayna Brons, to shoot for the chance to have a $1,000 donation made to Canadian Blood Services in Dayna’s name. Carol successfully made the shot, and Canada Life also presented a $100,000 cheque supporting Canadian Blood Service’s NextGen Lifeline program.

We’ll be at the Saskatoon @BladesHockey game tonight in the concourse of the SaskTel Centre. Find us for your chance to win a @CHLMemorialCup Getaway. We’ll also be donating $100,000 to @CanadasLifeline! #CHL #MyHockeyLife https://t.co/CWjTMnbA68 pic.twitter.com/TchCRbFa0v

A focal point in the movement of women’s rights, International Women’s Day was celebrated on Sunday. Billet moms, family members, staff, and broadcasters were among those recognized for their outstanding contributions from coast-to-coast.

Today, we also recognize all the incredible moms and billet moms in our organization – past, present, and future. 💙❤️ #InternationalWomensDay #IWD2020 #UnitedBySport #YQL #WHLCanes #WHL

Thanks to all the amazing women who help make every gameday possible #InternationalWomensDay pic.twitter.com/caOtoAzG5C

On this #InternationalWomensDay, we say THANK YOU to all the women in our organization as well as the players mothers and billet mothers!

On #InternationalWomensDay we are proud to recognize @ohowe16 and reflect on her inspiring #CHL role as a Coaching Assistant for @TheWHL’s @MJWARRIORS.

Breaking Barriers in the Booth
↪️https://t.co/INRx0l1D1s

A documentary about the first all-female @OHLHockey broadcast and the women who made it happen.

Plus, an in-depth look at the female influence in sports media.#IWD2020 #EachforEqual pic.twitter.com/7hi1dhwr9w

Last Tuesday marked the one year anniversary of the tragic passing of QMJHL player Alec Reid who died due to complications related to epilepsy on March 3, 2019. The former member of the Blainville-Boisbriand Armada was honoured again on Saturday during a special ceremony of remembrance with his mother Josee in attendance. The Armada fittingly won their Tuesday night game, and emerged victorious again on Saturday.

Taken one year ago. Gone too soon.

Big Game for the Blades

On Friday night in Saskatoon while promoting organ donation as part of the WHL Suits Up campaign, the Blades welcomed young fan Nate Starycki to the game. Nate was born with Gastroschisis and is in a constant battle for survival as he lives with intestinal and liver failure. the doNate the Gift of Life campaign was started by the family, and currently supported by the Blades, to help raise funds for the Jim Pattison Children’s Hospital Foundation. Joining Nate, and the Blades, was also David Ayres who recently served as an emergency backup for the Carolina Hurricanes winning his NHL debut against the Toronto Maple Leafs. Ayres, a kidney transplant recipient in 2004, was part of the ceremonial face-off with the Starycki family and announced the Blades starting lineup pre-game.

At just 12 years old, Nate Starycki is battling something far greater than any game of hockey.

We shared his story of survival to our four captains, who were immediately moved and inspired by Nate's ability to push through.https://t.co/uXMKVtfecz pic.twitter.com/9mSL3z87mz

David Ayres announces the starting lineup prior to Friday’s game vs. Regina. pic.twitter.com/bfyIurH4Yx

A home win made sweeter by these #WHLSuitsUp jerseys!

A #WHLSuitsUp win in Winnipeg!

The Hockey Night in Canada vintage sweaters weren’t the only new threads on the ice last weekend as the Moose Jaw Warriors paid tribute to the famous Snowbirds – the military aerobatics or air show flight demonstration team of the Royal Canadian Air Force based at 15 Wing Moose Jaw. The Niagara IceDogs also wore special sweaters designed by a local elementary school student which were made available for auction, and the Acadie-Bathurst Titan unveiled their jerseys for 2020 Hockey Weekend.

Owen did a pretty stellar job of designing this one 👌

We'll be wearing these jerseys on Saturday against the @ErieOtters.

All jerseys will be auctioned live post-game with proceeds benefitting @efnniagara and the Niagara Foundation for Catholic Education! pic.twitter.com/HrGheOYzhu

Kids took over the program in St. Catharines on Saturday when the Niagara IceDogs hosted their Night School game in partnership with the Education Foundation of Niagara and Niagara Foundation for Catholic Education. In addition to the specially designed jerseys, elementary school contest winners fulfilled the roles of Junior Reporter, Junior PA Announcer, Junior In-Game Host, and Coaches Assistant for the game.

Fan appreciation games are not uncommon this time of year as the regular season winds down, however the Prince George Cougars provided an interesting twist to their pre-game festivities on this occasion. Parents of all players, also known as the original fans, appeared on ice and had the opportunity to pose for pictures with their son providing a special keepsake from the 2019-20 season.

Fan appreciation night kicked off by appreciating the biggest fans we have; the parents. The original coaches and role models of the 23+ great guys we have this season, thank you parents for all you do ❤ pic.twitter.com/3Fh6KsXYpy

Last week Alex-Olivier Voyer of the Sherbrooke Phoenix launched a local initiative to support his community and invited fans to donate new or gently used sports equipment. The team proudly posted the result of his efforts that will go towards youth in the region through the David Perron Foundation.

The OHL’s first place Ottawa 67’s got a lesson in team building from Ottawa Fire Services. As the First Responders suggest, many of the skills required by the hockey team are those exhibited by firefighters every day.

Today, we had the honour of hosting a team building day for @Ottawa67sHockey. Players joined firefighters to experience standard firefighting tactics. Many of the skills required by the hockey team are those exhibited by firefighters every day. #communication #trust #team #noquit pic.twitter.com/3toJM3XO3f

The Owen Sound Attack became insta-famous last week thanks to superstar Justin Bieber’s social media post wearing the club’s jersey and declaring the OHL club the best team in the galaxy. The post, seen and liked by millions, also features Attack assistant coach Joey Hishon, a fellow Stratford native, who has been training with Bieber in skills development.

“Owen Sound Attack, the best team in the world, no wait the universe, actually no wait the galaxy” – @justinbieber

Truer words have never been spoken.

A trio of talents became the latest to join the growing Century Club this season in securing their 100th point to make it six players across the circuit to do so in 2019-20. The new additions include a pair of first-round NHL picks in Oshawa Generals forward Philip Tomasino (Nashville Predators) and London Knights centre Connor McMichael (Washington Capitals) as well as Minnesota Wild third rounder Adam Beckman of the Spokane Chiefs.

💯 points on the year for Connor McMichael! pic.twitter.com/tLepBPLIVp

Ottawa 67’s draft-eligible left-wing Jack Quinn continues to build his stock ahead of Draft Day, putting up a two-goal performance on Sunday to give him 51 tallies on the season which trails only Nick Robertson of the Peterborough Petes. In all, Quinn becomes just the 10th CHL skater in the past 20 seasons to reach 50 or more goals as a first-year draft eligible, joining the likes of Sidney Crosby, Steven Stamkos, John Tavares, and Patrick Kane, among others.

The record books will be rewritten across the CHL after a quartet of impressive accomplishments in recent days, beginning with London Knights freshman netminder Brett Brochu as he picked up his 32nd victory of the season to mark the most wins by a 16 or 17-year-old rookie in OHL history.

Elsewhere, Los Angeles Kings draft pick Arthur Kaliyev of the Hamilton Bulldogs became the franchise’s all-time points leader after he notched his 44th goal of the season this weekend to mark his 248th point with the franchise, while a similar feat came in Owen Sound where defenceman Brady Lyle surpassed former Attack rearguard Bobby Sanguinetti in notching his franchise record-setting 42nd career goal. Rounding out the major milestones, Macauley Carson of the Sudbury Wolves appeared in his 302nd game with the club, setting a new franchise high-water mark.

BEYOND proud as he secures his 32nd win, breaking a 39 year old record! pic.twitter.com/3S5Xy7NcWF

Another day, another Bulldogs record for @arthur_kaliyev! 🙌

With his goal in the 1st period tonight, Brady Lyle passed Bobby Sanguinetti for 1st All Time in most goals by an Attack Defenseman with 42!

✔️In the books 📚
🐺 Congrats @macauleycarsonn on breaking and setting a new franchise record of games played in a Wolves uniform! 👊 #runwiththepack pic.twitter.com/QYRTxfmbAX

A pair of players in New York Islanders prospect Cole Coskey of the Saginaw Spirit and 20-year-old forward Ryan Hughes of the Kamloops Blazers are the latest CHL talents to hit the iconic 300 regular-season game milestone. Extra special for Coskey is with the achievement he becomes the first player in Spirit franchise history to meet the mark with all 300 of those games played within the organization.

Congrats @coskey_cole!@NYIslanders prospect becomes first player in @SpiritHockey history to suit up in 300 career #OHL contests with the team.

A pair of Everett Silvertips overagers will now have the chance to continue on to the pro ranks after the Anaheim Ducks inked forward Bryce Kindopp and the Columbus Blue Jackets came to terms with his teammate in defenceman Jake Christiansen, with both players landing three-year, entry-level contracts. This season, Kindopp leads Everett in scoring with 74 points in 63 games while Christiansen stands atop all WHL rearguards with an astounding 22 goals.

Welcome to the organization, Bryce. https://t.co/TaiP8ZKAUI

#CBJ sign Jake Christiansen to three-year ELC beginning in 2020-21 season. He currently leads the WHL in goals and points-per-game for defensemen. https://t.co/zYF7EzixYG

The defending Stanley Cup champion St. Louis Blues have put pen to paper with Flint Firebirds blue-liner Tyler Tucker, the club’s seventh-round selection in the 2018 NHL Draft. Tucker, 20, has had an impressive campaign with the Firebirds this season as he sits eighth among OHL defencemen in scoring and above a point-per-game pace with 17 goals and 38 assists across 54 contests.

A change behind the Hamilton bench saw first-year head coach Vince Laise replaced by Bulldogs president and general manager Steve Staios for the balance of the regular season.

For the 14th time in franchise history and the first time since 2012, the Kamloops Blazers were crowned division champions following Saturday’s 8-1 victory over the Tri-City Americans. The Blazers are one of the WHL’s top teams this season – and the first to win their division – earning a 41-17-3-1 record and 86 points through 62 games.

The Moncton Wildcats and Chicoutimi Sagueneens also clinched the QMJHL’s Maritimes and East Division titles leaving just one banner up for grabs in that league, while three WHL and three OHL divisional titles are still to be determined.

Another 11 spots have been officially claimed since last week’s review including the Kelowna Rockets and Saskatoon Blades in the WHL, the Guelph Storm, Hamilton Bulldogs, and Mississauga Steelheads in the OHL, plus the Baie-Comeau Drakkar, Quebec Remparts, Rouyn-Noranda Huskies, Shawinigan Cataractes, Val-d’Or Foreurs, and Victoriaville Tigres in the QMJHL. This leaves just five of 48 spots open, including three in the OHL and one in each of the QMJHL and WHL, as teams ready to compete for the 2020 Memorial Cup.

The @BulldogsOHL have qualified for the fourth straight season leaving just five spots open across the board.