CHL TV Game of the Week presented by Kubota | 3 Reasons to Watch – Remparts vs. Wildcats 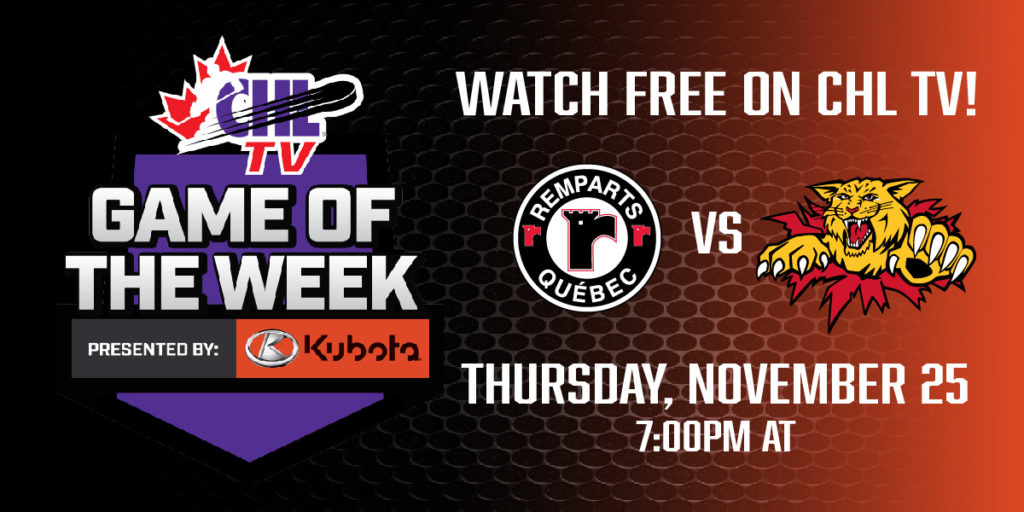 The CHL TV Game of the Week presented by Kubota brings a weekly free game to CHL TV throughout the 2021-22 regular season. The action continues Thursday as the Quebec Remparts visit the Moncton Wildcats with puck drop set for 7 p.m. Atlantic.

To get you ready, here are three reasons why this QMJHL showdown is must-see TV:

Among the names circled on the Quebec lineup card will be captain Theo Rochette, who has been an offensive force for the club through the first two months of action. Across 20 contests, the 2002-born centre has tallied a team-leading 29 points counting 11 goals and 18 assists, a stretch that has seen him held without a point on just three occasions this season. Picking up four points across his past three appearances, Rochette stands just five points back of Montreal Canadiens prospect Xavier Simoneau of the Charlottetown Islanders for top spot in QMJHL scoring. Meanwhile, the Remparts also offer up one of the most talented netminders in the circuit in 18-year-old William Rousseau, who through nine showings has found the win column six times while coming away with league-best performances in the goals-against average (1.92) and save percentage (.923) columns.

For the Wildcats, who share the spotlight alongside Gatineau with a league-leading four players named in NHL Central Scouting’s latest report ahead of the NHL Draft, that list includes forwards Maxim Barbashev and Yoan Loshing, defenceman Francesco Iasenzo, and goaltender Vincent Filion, all of whom project to hear their names called in the latter half of the 2022 class. Meanwhile, also bringing plenty of youthful exuberance to Moncton is 2005-born blue-liner Etienne Morin, an early second-round selection from the 2021 QMJHL Entry Draft who has made a seamless transition to the junior ranks. Through 19 appearances, the Salaberry-de-Valleyfield, Que., native has recorded four goals and eight assists for 12 points, including three points in his past three outings. In all, that performance has Morin sitting fourth in team scoring and first among rearguards as well as ninth-best in league-wide rookie scoring.

Morin loving the wrist shot tonight – a look at our fourth goal of the evening!#DefendTheDen https://t.co/icKfwXsJet pic.twitter.com/6T6ZLW0xYk

Home to budding centre Nathan Gaucher, the Remparts forward is one of the most intriguing talents in this year’s Draft class, with the most recent projections showing him as a first-round candidate. Through 20 appearances, Gaucher has notched 18 points counting eight goals and 10 assists, good for third in team scoring behind Rochette and St. Louis Blues prospect Zachary Bolduc, who is one of five Remparts players to have already gone through the NHL Draft experience – a group that also includes forwards James Malatesta (Columbus Blue Jackets) and Viljami Marjala (Buffalo Sabres) plus defencemen Louis Crevier (Chicago Blackhawks) and Evan Nause (Florida Panthers). Gaucher will inevitably lean on that group as he comes to learn what to expect and how best to prepare for when NHL Draft day comes.

Nathan Gaucher showing us why he's highly touted for the 2022 #NHLDraft@quebec_remparts | @QMJHL pic.twitter.com/ibhnpLgaxh