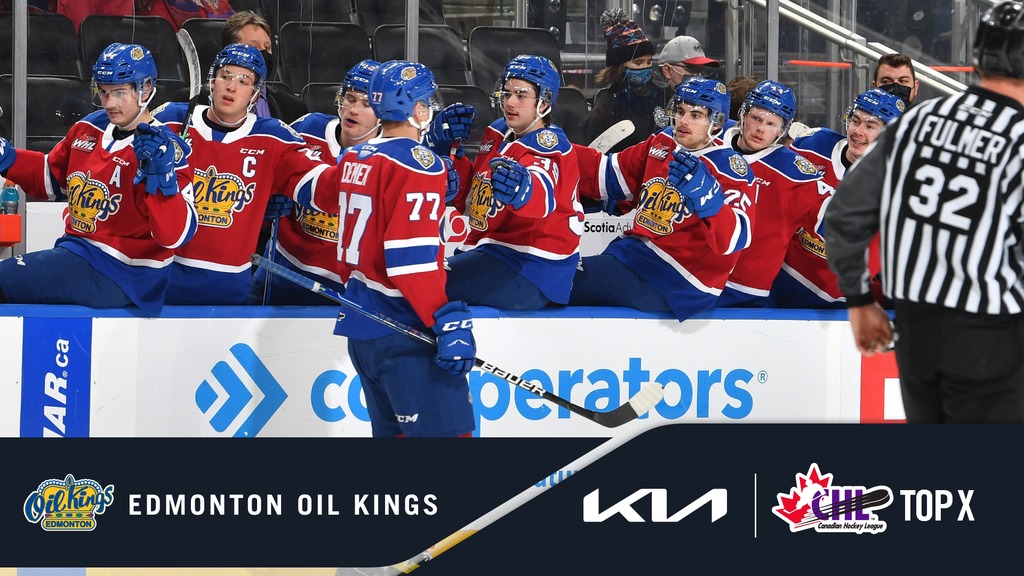 Make it four straight weeks at the top for the Winnipeg ICE, the most dominant club in the circuit and winners of eight straight, now with 38 points through 20 appearances. Headlined by 17-year-old centre Matthew Savoie, the projected first-round selection in the upcoming NHL Draft leads the WHL in scoring with 33 points counting 11 goals and 22 assists, underscored by an eight-game point streak in which he has found the scoresheet on 17 occasions.

Nearly equally impressive to what is happening in Winnipeg is the early season start for the Everett Silvertips who as December approaches remain undefeated in regulation through 16 showings, with their lone imperfect game coming as a shootout loss to rival Portland in late October. Powering the Silvertips to victory over the past week were a handful of impressive performances from 2002-born blue-liner and Carolina Hurricanes draftee Ronan Seeley, the newly minted WHL Player of the Week who wrapped up his past four appearances with two goals and five assists, a stretch that counted a pair of three-point efforts coming in wins versus Portland and Spokane.

From the B.C. Division, the Kamloops Blazers had a lone contest on the week but made the most of it in coming away with a 5-1 road win in Seattle where 2022 NHL Draft hopeful Matthew Seminoff netted his first career hat-trick to bring him to 10 tallies on the season, making him one of just one of 13 players league-wide to have scored double digits and helping to push the Blazers’ win streak to three straight.

Rounding out the top four from the WHL is the Edmonton Oil Kings who continue to see an impressive return from left-wing Jake Neighbours, now with four points in as many games after initially beginning the year in the pro ranks with the St. Louis Blues. Elsewhere, Arizona Coyotes prospect Dylan Guenther has made a seamless transition to the middle of the ice as he now stands with 22 points through 19 points, good for a share of top spot in team scoring with fellow forward and Chicago Blackhawks up-and-comer Jalen Luypen.

From the OHL, the London Knights rebounded following a pair of disappointing losses to Sarnia in twice finding the win column in a weekend set versus rival Kitchener. For the Knights, Nashville Predators prospect Luke Evangelista continues to be dominant at the forward ranks, closing out the week with nine points highlighted by back-to-back four-point efforts coming against the Rangers. Now with 15 goals and 12 assists through 15 appearances, the budding right-wing stands just seven points shy of Peterborough’s Tucker Robertson for first in league scoring.

From the QMJHL, the Charlottetown Islanders lead the way in clocking in at No. 6 in the Week 8 edition of the Kia CHL Top-10 Rankings following victories over Moncton and Acadie-Bathurst that made it five straight for the Islanders. In all, the two victories saw the Islanders combine for 13 tallies with Montreal Canadiens draftee Xavier Simoneau leading the way with three goals and three assists who now moves into first in league scoring with 34 points, two ahead of fellow Canadiens up-and-comer Joshua Roy of the Sherbrooke Phoenix.

For the Phoenix, the club dips one spot in the rankings following a mixed bag week in which it found the win column versus Blainville-Boisbriand and then did the same against Rimouski in overtime before then falling in extra time to Victoriaville.

Back in the OHL, the red hot Mississauga Steelheads have won three in a row, part of a dominant stretch in which the squad has picked up 17 of a possible 20 points in its past 10 outings. Earning its first appearance in the Kia CHL Top-10 Rankings this season, Mississauga now sits just three points back of the North Bay Battalion for top spot in the OHL’s Central Division. Tune in Thursday on CHL TV as the Steelheads head to Sudbury to take on the Wolves where they will look to push their win streak to four straight.

For the Battalion, pushing the pace offensively is San Jose Sharks draftee Brandon Coe who collected eight points in the three-game week, placing him a lone point shy of the league lead while also helping him to earn a spot on the CHL Team of the Week. Meanwhile, the Battalion also continue to see impressive early returns from right-wing Matvey Petrov, an Edmonton Oilers prospect and the first-overall selection from the 2020 CHL Import Draft whose first season in North America has shown little difficulty in adjusting to the new environment as his 27 points in 19 games sit third in team scoring.

Rounding out the Week 8 edition of the Kia CHL Top-10 Rankings is the Rimouski Oceanic who have picked up three of four points in their past two outings to climb to second place in the QMJHL’s Eastern Conference, just a pair of points behind Charlottetown.

In the honourable mention category, the Kingston Frontenacs are 2-0-1-0 in their past three, putting the club at 21 points in 16 games and a lone point back of top spot in the OHL’s East Division. Among the most impressive performers for the Frontenacs this season is overage right-wing Lucas Edmonds whose 30 points put him in contention for first in the OHL scoring race.

Elsewhere, the Gatineau Olympiques continue to make noise in the QMJHL, having climbed to second place in the Western Conference. Alongside Moncton, the Olympiques are a frequent tune-in for talent evaluators with a league-leading four players recognized in Central Scouting’s November rankings, headlined by talented rearguard Tristan Luneau who has picked up 11 points in16 games and projects as a first-round selection in the 2022 NHL Draft.

Finally, the WHL’s Red Deer Rebels – winners of five straight – are beginning to draw attention as they continue to climb the ranks out west. Now just two points back of Edmonton for tops in the Central Division, the Rebels bring a well-balanced attack, while the past week also saw success from 2003-born netminder Chase Coward who turned aside all 22 shots versus rival Calgary on Friday to record his first career shutout.