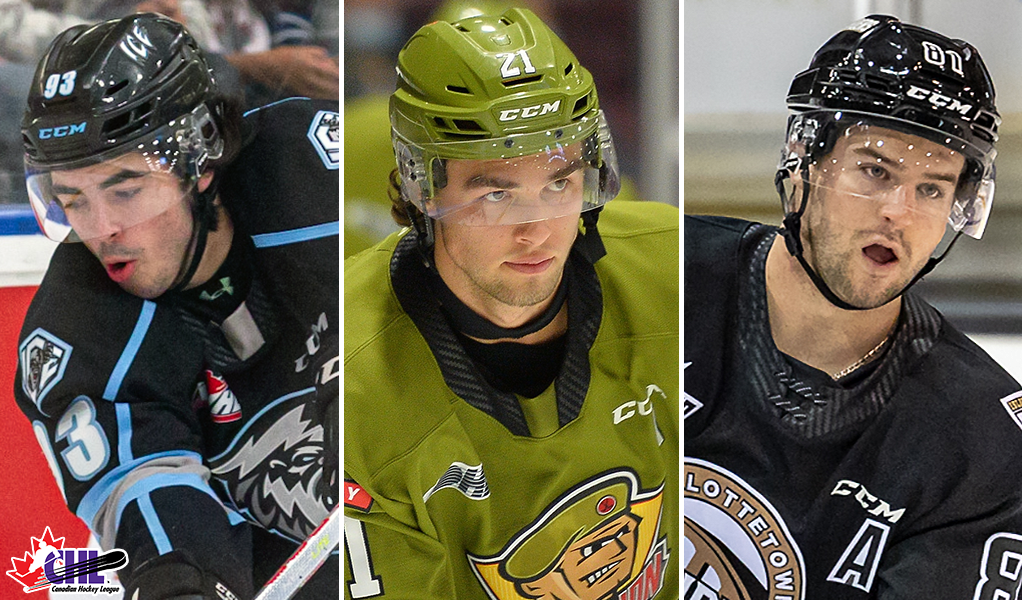 Offering a glimpse of the top performers from coast to coast, CHL Stats Snapshot continues with a look at the league’s leading playmakers, where through late November eight players have recorded at least 20 helpers:

Standing atop the QMJHL with 24 assists across 17 appearances, Montreal Canadiens prospect Xavier Simoneau of the Charlottetown Islanders is currently riding a five-game point streak in which he has collected 10 helpers, while on just two occasions this season he has been held without an assist. Facing Halifax in mid-November, the overage centre finished with a season high of four assists en route to a 6-4 road win and third-star recognition. Originally chosen ninth overall by Drummondville in the 2017 QMJHL Entry Draft, Simoneau has registered 190 assists over 250 career contests.

The OHL’s top set-up man, North Bay Battalion overage right-wing Brandon Coe has decorated the scoresheet this season to the tune of 24 assists coming across 19 appearances. In all, the San Jose Sharks draftee has recorded at least one assist in each of his past eight appearances, totaling 14 helpers, while twice this season he has wrapped up a contest with at least three assists. Chosen third overall by the Battalion in the 2017 OHL Priority Selection, Coe has collected 89 assists through 207 total appearances with the club.

Among the most highly touted talents ahead of the 2022 NHL Draft, Winnipeg ICE diminutive centre Matthew Savoie has no trouble finding the scoresheet as evidenced by his 22 assists through 20 contests this season. A noted playmaker, Savoie has notched multi-assist efforts five times this season underscored by a four-point night coming against Prince Albert in early October in which he finished as the first star in the 8-0 rout. The first-overall selection from the 2019 WHL Draft, Savoie will once again hear his name called early on draft day, with the latest projections from NHL Central Scouting showing him as an expected first-round candidate.

This is why he's a top prospect for the #NHLDraft

Bringing an offensive touch from the back end, Winnipeg ICE veteran blue-liner Benjamin Zloty is a modern era defenceman who despite his smaller stature possesses the invaluable ability to move the puck up the ice and make plays. That has been best illustrated on the scoresheet this season where the Calgary product has recorded 21 assists through 20 appearances, including a recent three-assist effort versus Lethbridge that helped his squad secure a 5-1 victory. Originally chosen by the ICE in the 2017 WHL Draft, Zloty has recorded 60 assists in only 101 career contests.

A look at Zloty’s goal late in the third! pic.twitter.com/CuhRU4PWpJ

Riding shotgun to 2022 NHL Draft headliner Shane Wright, Kingston Frontenacs overage right-wing Lucas Edmonds is cashing in on the scoresheet to the tune of 20 assists through just 16 appearances in 2021-22. Currently riding a five-game point streak in which he has collected 11 assists, that stretch also includes a season-best showing of four assists coming in Friday’s 5-3 takedown of Peterborough in which Edmonds was named the game’s second star. Originally chosen by Kingston in the 2017 OHL Priority Selection, Edmonds committed to the club this past offseason after previously suiting up overseas.

More good stuff from @KingstonFronts' Lucas Edmonds (@lucasedmonds24), who springs Jordan Frasca in alone shorthanded for his second of the game 🎥 pic.twitter.com/w8vMCtSB6Y

One of three OHL skaters with 20 helpers on the season, Edmonton Oilers prospect Ty Tullio has been an offensive driver for the Oshawa Generals, recording at least one assist in all but three of his 17 games this season, including six nights where he has finished with multiple helpers. The 11th overall pick from the 2018 OHL Priority Selection, Tullio’s time with the Generals has totaled 86 assists coming in 139 career appearances.

Rocket wrister to where mama hides the cookies 🍪@EdmontonOilers prospect Ty Tullio (@TylerTullio) getting a new point streak fired up as the @Oshawa_Generals lead in Niagara 🎥 pic.twitter.com/fZV9Rkz1eS

The latest example of a player who despite lagging size makes up for it in offensive creativity, Halifax Mooseheads sophomore right-wing Jordan Dumais has collected 20 assists through 19 appearances this season, already outpacing the 19 assists he recorded in his 40-game rookie campaign. Twice this season, the first-round selection from the 2020 QMJHL Entry Draft has pieced together four-game point streaks, displaying the scoring touch that has him on the radar as a second-half selection in the upcoming NHL Draft.

Another Montreal Canadiens up-and-comer who excels at finding his linemates, Sherbrooke Phoenix left-wing Joshua Roy has been an offensive go-to for the club. Fresh off a seven-game point streak that ran through mid-November and saw him total nine assists, that stretch included one of five nights this season where Roy has finished with multiple helpers. The first-overall selection from the 2019 QMJHL Entry Draft, Roy’s time in the junior circuit has totaled 117 games in which he has collected 64 assists.