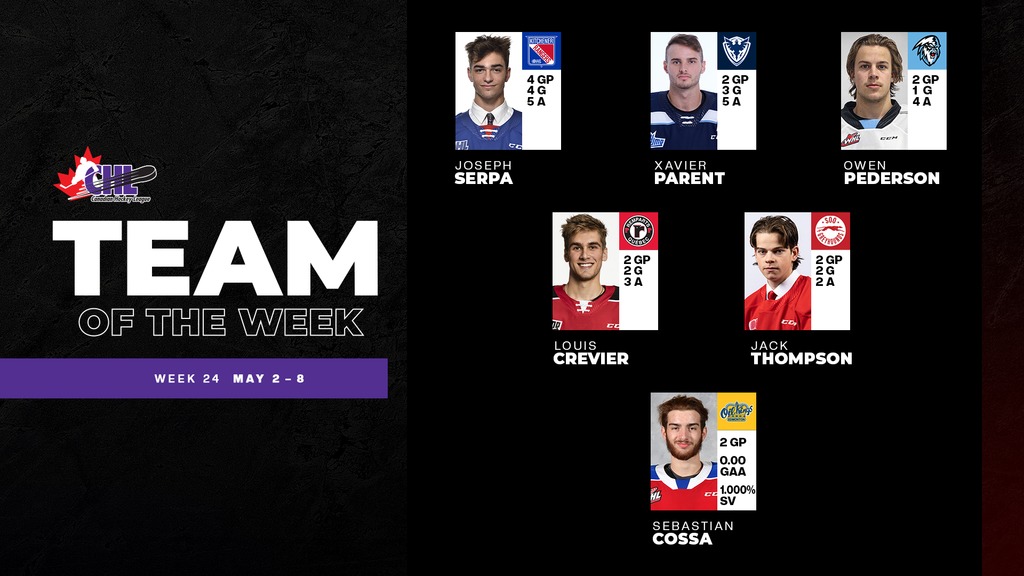 The Canadian Hockey League announced today the 24th edition of the CHL Team of the Week for 2021-22 based on individual performances from May 2-8.

Leading the forward ranks is Kitchener Rangers centre Joseph Serpa who through four appearances notched four goals and five assists for nine points highlighted by a four-point effort coming in Saturday’s 6-5 final versus Windsor. Serpa was later named the OHL Player of the Week for his efforts. A 20-year-old native of Cambridge, Ont., Serpa headlines the Rangers with 14 points in nine playoff outings.

Also up front is Sherbrooke Phoenix overage centre Xavier Parent who collected eight points counting three goals and five assists in a pair of appearances. Among the highlights was Parent’s five-point performance on Thursday to kick off the postseason versus Baie-Comeau. Through the playoffs, the product of Blainville, Que., sits tied for first in Phoenix scoring with nine points in three games.

Rounding out the forward group is Winnipeg ICE 2002-born left-wing Owen Pederson who registered one goal and four assists for five points in a pair of appearances including a one-goal, two-assist showing in Friday’s 6-1 win over Moose Jaw. Pederson was later named the WHL Player of the Week in recognition. A native of Stony Plain, Alta., Pederson sits third in ICE playoff scoring with 11 points in seven appearances.

On the blue line, Chicago Blackhawks draftee Louis Crevier of the Quebec Remparts impressed with five points counting two goals and two assists in a pair of appearances including three points coming in Saturday’s 6-3 win over Chicoutimi. A 2001-born native of Quebec, Crevier sits tied for first in Remparts playoff scoring with six points in three games.

Also on the back end is Tampa Bay Lightning prospect Jack Thompson of the Soo Greyhounds who put up four points counting two goals and two assists in two outings. Among the highlights was Friday’s 5-3 final versus Flint in which Thompson twice found the back of the net and added an assist. A 20-year-old native of Courtice, Ont., Thompson leads the Greyhounds with 13 points in seven playoff appearances.

Between the pipes, Detroit Red Wings draftee Sebastian Cossa of the Edmonton Oil Kings was perfect through a pair of appearances in which he put up back-to-back shutouts versus Red Deer that saw him combine for 44 saves. For his efforts, Cossa was named the WHL Goaltender of the Week. A 19-year-old product of Fort McMurray, Alta., Cossa remains undefeated through seven postseason appearances in which he has posted a .938 save percentage and 1.41 goals-against average.