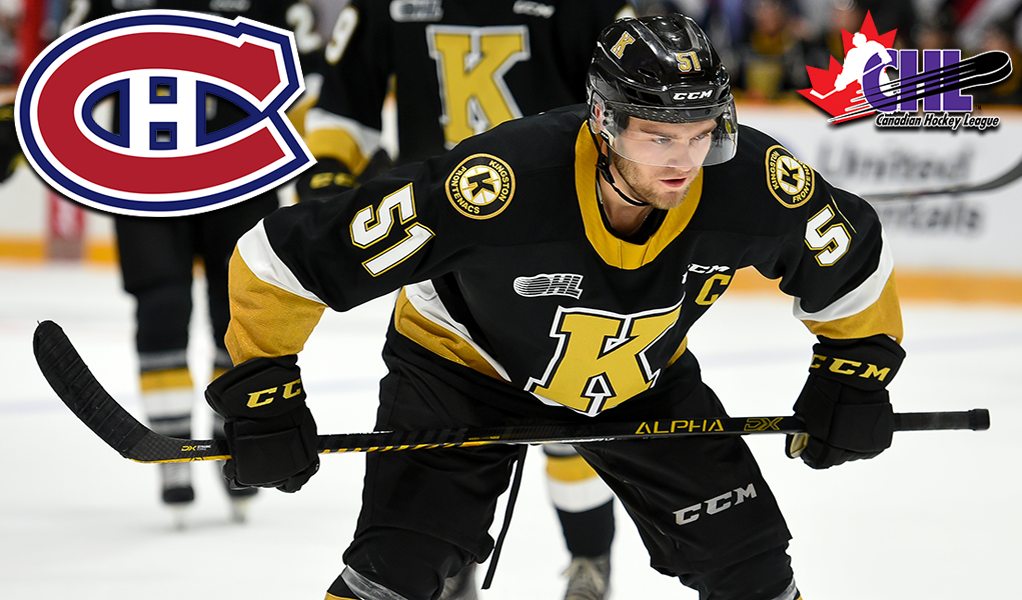 Where Shane Wright could be lacing up his skates this fall became a little clearer Tuesday.

With the NHL Draft Lottery hosted Tuesday night, the Montreal Canadiens were the lucky winners and have earned the right to select first overall in the 2022 NHL Draft after entering the draw with the greatest odds of winning.

Skating in his second season with the Frontenacs, Wright finished eighth in OHL scoring with 94 points counting 32 goals and 62 assists coming in 63 appearances. The talented centre has continued to shine in the 2021-22 postseason where he has collected 10 points in eight games and enters the 2022 NHL Draft as the top-ranked North American skater per NHL Central Scouting.

Wright’s performance comes on the heels of a year ago where with the OHL shuttered the native of Burlington, Ont., took to the national stage as captain of Team Canada at the 2021 IIHF U18 World Championship and posted a team-leading 14 points in five games to guide the Great White North to its first gold-medal finish since 2013.

“There is a completeness about Shane’s game to which he has the innate ability to rise to the level of play required to get results,” NHL Director of Central Scouting Dan Marr told NHL.com’s Mike Morreale. “Whether it’s with his speed, his exceptionally quick hockey wits, or just competing with a never-give-up approach.”

Since 1990, a total of 61 Frontenacs players have been selected in the NHL Draft including four current roster players counting Francesco Arcuri and Braden Hache (2021) as well as Martin Chromiak and Zayde Wisdom (2020). Additionally, 10 players from the Frontenacs over time have been chosen in the opening round of the NHL Draft, with the most recent being Lawson Crouse who went 11th overall to the Panthers in 2015. Should Wright be chosen first overall, it will mark the highest drafted player in Frontenacs’ history, topping Erik Gudbranson (Panthers, 2010) and Chris Gratton (Lightning, 1993).

Originally chosen atop the 2019 OHL Priority Selection after he became only the sixth player granted exceptional status and permitted early entry into the CHL, Wright debuted with the Frontenacs that fall in a pandemic-abbreviated campaign that saw him register 66 points in 58 games before ultimately earning recognition as the CHL Rookie of the Year.

In all, Wright’s freshman campaign was underscored by 39 goals as he surpassed Bernie Nicholls’ mark for the most goals by a rookie in franchise history. Additionally, Wright’s 66 points matched the first-year production of top OHL alumni and fellow exceptional talents like Connor McDavid, with the former hitting the mark in five fewer outings, and challenged John Tavares’ 77 points in 65 games prior to the shutdown of the 2019-20 season.

Since the implementation of the NHL Draft in 1963, the Canadiens have selected first overall five times, most recently in 1980 when the club chose forward Doug Wickenheiser of the Regina Pats. Should Wright hear his name called by the Canadiens, he will join a list of NHL prospects like Edmonton Oil Kings blue-liner Kaiden Guhle as well as Acadie-Bathurst Titan centre Riley Kidney plus current roster players and CHL graduates like Nick Suzuki (Guelph Storm), Christian Dvorak (Knights), and Carey Price (Tri-City Americans).

Beyond the Canadiens at No. 1, rounding out the top-three selections includes the No. 2 placed New Jersey Devils, whose lottery win saw the club move up from the fifth selection, as well as the No. 3 Arizona Coyotes.

The 2022 NHL Draft will be held July 7-8 in Montreal. Last year, 87 CHL players were chosen in the 2021 NHL Draft, including 15 selections in the opening round and the League’s best overall showing since 2017.