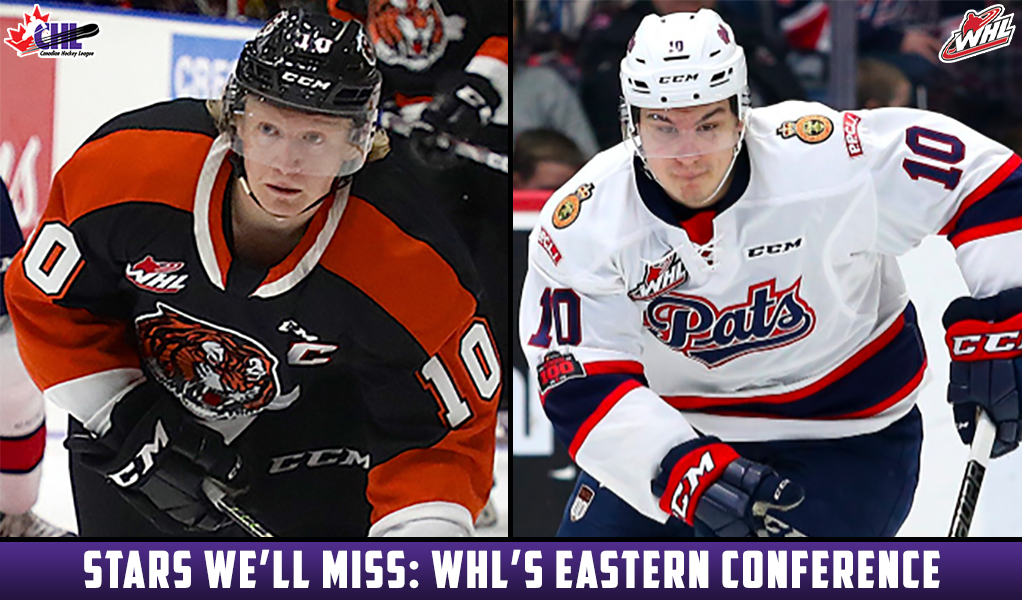 The Calgary Hitmen may see as many as five players depart from their roster headlined by captain Mark Kastelic who recently inked an entry-level contract with the Ottawa Senators. The 21-year-old Arizona native spent his entire junior career with the Hitmen, racking up 235 points across 321 total appearances.

Also graduating from the Hitmen is overage forward Kyle Olson, who previously served as captain for the Tri-City Americans before joining Calgary in January, as well as a trio of a defencemen beginning with 1999-born Dakota Krebs who is another former Americans player who accumulated 308 career games. Also in a positions to move on are 2000-born signed NHL prospects Jett Woo (Vancouver Canucks) and Egor Zamula (Philadelphia Flyers). Woo was a second round pick in the 2018 NHL Draft while Zamula is one of two CHL players from his age group to sign as a free agent.

Congratulations and Thank you to Mark Kasteslic, Dakota Krebs and Kyle Olson. pic.twitter.com/jT70qgwXTQ

Three players are set to move on from the Edmonton Oil Kings beginning with veteran forward Ethan McIndoe, who closes out his WHL career with 161 points coming in over an impressive 321 total games split between the Oil Kings and the Spokane Chiefs.

Other graduates from the division leaders include fellow overagers Riley Sawchuk, who reached a single-season high of 76 points during his only year in Alberta’s capital, as well as veteran netminder Beck Warm, who played just 15 games in Edmonton but looks back on a career that featured a WHL West Second All-Star Team nod a year ago.

They weren't here for a long time, but they were certainly here for a good time! Thank you Ethan McIndoe, Riley Sawchuk and Beck Warm for finishing your WHL careers with us. #allhail @ethanmcindoe @RileySawchuk pic.twitter.com/efqWtBTsGW

Upwards of four players may graduate from the Lethbridge Hurricanes led by 20-year-old blue-liner Calen Addison, who is expected to begin his pro career next season with the Minnesota Wild organization. Originally drafted by the Pittsburgh Penguins, Addison was moved to the Wild in February, all part of a decorated season that also saw the Eastern Conference Defenceman of the Year claim gold with Canada at the 2020 World Junior Championship.

Also graduating from the Hurricanes are overagers Brett Davis, who returned to Lethbridge this season after originally beginning his junior career with the club in 2014-15, and who has since totaled 309 career games. Co-captain Ty Prefontaine played 255 career games and has committed to the University of Saskatchewan Huskies for next season, and defenceman Koletrane Wilson who spent all 190 games of his career with the franchise recently signed an American Hockey League contract with the Stockton Heat.

Our final graduating player in our #WHLCanesPS is Captain @PrefontaineTy! He played with three teams in 255 career games, with the #WHLCanes he played 244 games collecting 69 points (10G, 59A). We’re gonna miss you Prefs! 🔵🔴 #ForeverACane #YQL pic.twitter.com/kt7d3gXT6p

A trio of players are set to move on from the Medicine Hat Tigers headlined by longtime captain James Hamblin who will join the AHL next season after recently signing a two-year agreement with the Bakersfield Condors. The 21-year-old spent his entire career with the Tigers, notching 283 points in 323 games, including this season that saw him finish third in league scoring with 92 points which also tied for first among all 1999-born CHL players.

Other graduates from Medicine Hat include overage defencemen Parker Gavlas who will utilize his WHL Scholarship at the the University of Saskatchewan next season, and Dylan Plouffe (University of Alberta), who joined the club in December after four full seasons spent with the Vancouver Giants, bringing his career total to 307 games including 145 points.

We would like to say a huge thank you to James Hamblin, Parker Gavlas and Dylan Plouffe!! #medhat #50yearsofTigers #AlwaysATiger pic.twitter.com/mX4U7M54ZJ

A pair of overage players will graduate from the Red Deer Rebels including 1999-born rearguard Ethan Sakowich, who closes out his four-year junior career as captain of the franchise he spent his entire league tenure with totaling 268 games and 63 points.

Forward Cameron Hausinger, whose career counted stops with three different clubs including an abbreviated stint with the Rebels in 2016-17, is also set to graduate after appearing in 317 total games in which he collected 161 points.

Sakowich cherished his time in Red Deer despite premature end to his final season. #RDR

Three overage players will graduate from the Swift Current Broncos headlined by captain Jaxan Kaluski who has committed to the University of Saskatchewan for the coming campaign. Despite being limited to 42 appearances in 2019-20, the 21-year-old put up a career high of 30 points, bringing his total to 55 points over 173 games with three different franchises.

Also graduating from the Broncos are forwards D-Jay Jerome and Hayden Ostir who had short tenures in Speedy Creek but both appeared in more than 230 career contests in their respective junior careers.

Thank you to our three 20-year-olds!

You led by example on the ice and helped shape the next generation of Swift Current Broncos in the locker room and the community.

Best of luck in your next adventure! pic.twitter.com/UZdLIgNQSI

Three overage players will graduate from the Brandon Wheat Kings headlined by captain Connor Gutenberg who spent all five seasons of his junior career with the club that began with a 2016 Ed Chynoweth Cup. In all, Gutenberg skated in 312 contests in which he collected 184 points, including 15 goals and 22 assists in 2019-20.

Other graduates from the Wheat Kings include overage defenceman Dom Schmiemann (Mount Royal University) who played a total of 258 career games, as well as 1999-born netminder Jiri Patera, a Vegas Golden Knights prospect who set a single season franchise record with a 2.55 goals-against-average.

A trio of overagers are set to move on from the Moose Jaw Warriors beginning with captain Owen Hardy who wraps up his five-year junior career spent mostly with the Giants prior to joining the Warriors in October. In all, Hardy collected 102 points across 274 career appearances.

Also graduating from Moose Jaw are overage defencemen Chase Hartje and Carson Sass. Hartje finished his career where it started as a free agent in 2017 while Sass departs with more than 250 career contests to his credit split between three WHL franchises.

Thank you for everything that you've done for our organization AND our community #OnceAWarriorAlwaysAWarrior pic.twitter.com/8c4gPunU1H

Three players will graduate from the Prince Albert Raiders led by captain and veteran defender Zack Hayes who spent his entire junior career with the Raiders including 272 total contests and an Ed Chynoweth Cup championship last spring. The 21-year-old will turn pro next season after inking a minor-league contract with the AHL’s Chicago Wolves.

Other graduates from the Raiders include fellow overagers in forward Brayden Watts who wraps up his WHL career with 315 total appearances, as well as defenceman Jeremy Masella who will join the Carleton University Ravens next season proudly wearing his WHL championship ring.

Zack Hayes (@hayesie24) missed just five games in his four-year WHL career as he leaves Prince Albert a captain and a WHL Champion. Thank you Zack for your contributions to Prince Albert and congratulations on a great career!#GoRaidersGo #YearEndAwards #ThankYouZack pic.twitter.com/dz9hUh7zsR

The Regina Pats will see three overage players depart led by captain Austin Pratt who closes out his WHL career with 174 points notched in 317 games. The Minnesota native will remain in the Queen City next season as he competes for the University of Regina Cougars.

Also graduating from the Pats are 1999-born forward Robbie Holmes, whose 231 career games count more than 200 contests with Regina, as well as overage defenceman Zach Wytinck who finished his career with the team after playing parts of four seasons in Brandon.

Join us in a massive thank you to our three graduating players!

You have been a true credit to our team and our city, best of luck as you move forward.

The #PatsRegiment will always be here cheering you on! pic.twitter.com/NN2QbdwOZK

Three players will graduate from the Saskatoon Blades including 21-year-old defenceman Nolan Kneen whose WHL career spanned 310 total appearances split between the Blades and Kamloops Blazers. The Kelowna native closes out his junior days following a career-high 40-point campaign this season.

Other graduating overagers from the Blades include forward Riley McKay, who recently inked a minor-league contract with the AHL’s Rockford IceHogs following his 243 career games, as well as defenceman Scott Walford, who appeared in 290 career contests producing 174 points mostly for the Victoria Royals before joining Saskatoon this season.

With the conclusion of the 2019-20 season, comes a final farewell to our three graduating players.

To Nolan Kneen (@NKneen), Riley McKay (@porksmckay) and Scott Walford (@ScottWalford7), thank you for your dedication, spirit, and representing the Blades to the highest standard. pic.twitter.com/Q6oDekUxau

The Winnipeg ICE will have a new look next season with potentially five players departing beginning with overage forward Isaac Johnson who will remain in the city for the coming campaign after signing a minor-league deal with the AHL’s Manitoba Moose. Johnson concludes his WHL career with a near point-per-game stat line of 57 goals and 96 assists coming in 161 appearances.

Other overagers from the ICE include defenceman Reece Harsch whose career includes a 2017 WHL championship with the Seattle Thunderbirds, and netminder Liam Hughes who played in 110 career games. Additionally, 2000-born defenceman and Dallas Stars prospect Dawson Barteaux is eligible to join the minor-pro ranks in 2020-21 after signing his entry-level contract, while 2001-born forward Nino Kinder has since returned to his native Germany where he will compete with the Berlin Eisbaren of the DEL next season.

On and off the ice, thank you for everything Isaac. #ForeverICE💙 pic.twitter.com/wytLFAlaaH