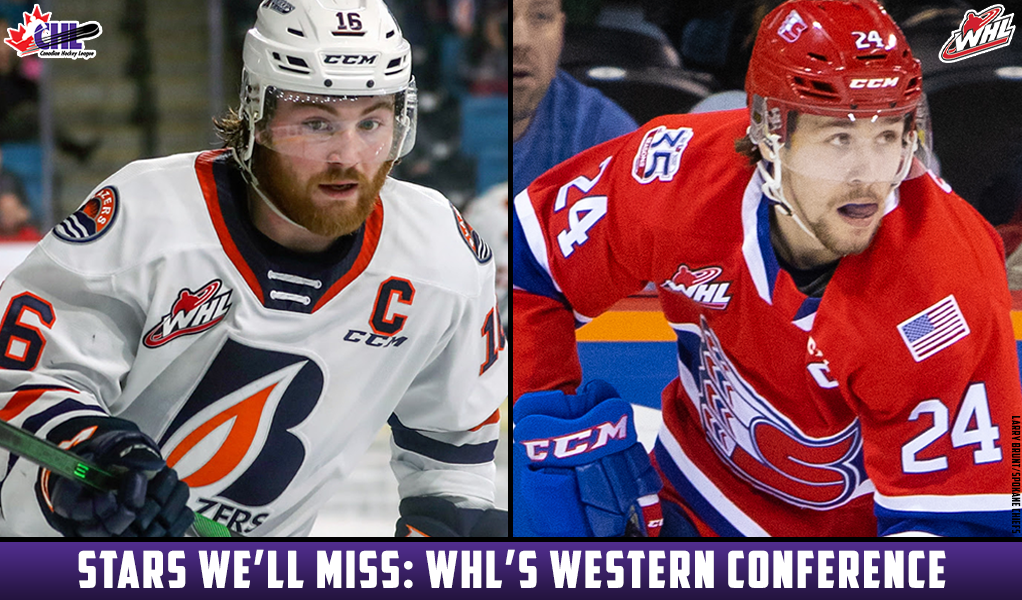 The Kamloops Blazers will notably see the departure of 21-year-old captain Zane Franklin whose 91-point performance this season saw him finish fourth in the league-wide scoring race. Franklin wraps up his decorated WHL career with 213 points secured in 269 regular season appearances.

Also graduating from the Blazers are fellow overagers Ryan Hughes whose career eclipsed the prestigious 300-game milestone, as well as defencemen Max Martin who recently signed an American Hockey League contract with the Texas Stars. Additionally, 2000-born blue-liner Libor Zabransky will return to his native Czech Republic after signing with HC Kometa Brno in the country’s top professional league.

Headlining graduates from the Kelowna Rockets is captain Nolan Foote who is expected to turn pro next season. Foote, who has spent all 195 games of his WHL career with the Rockets, was originally drafted 27th overall by the Tampa Bay Lightning before being moved to the New Jersey Devils in February. The 2000-born forward will compete for a spot on the Devils, or may be assigned to their AHL affiliate in Binghamton next season.

Another 2000-born forward chosen in the 2019 NHL Draft who is expected to turn pro is San Jose Sharks prospect Dillon Hamaliuk who signed his entry-level contract in October. The Rockets will also see the departures of overage forwards Kyle Topping (San Jose Barracuda), Florida Panthers 2019 pick Matthew Wedman, plus defenceman Conner McDonald (University of British Columbia). Both Wedman and McDonald have more than 300 career games to their credit.

A trio of players are set to move on from the Prince George Cougars beginning with fourth-year forward, captain, and 2019-20 leading scorer Josh Maser who topped the charts with 48 points in 62 games. After appearing in a lone game with the Prince Albert Raiders in 2015-16, Maser spent the remainder of his career with the Cougars, notching 143 points in 218 games.

Other graduates from the Cougars include overage import forward Vladislav Mikhalchuk as well as 1999-born defenceman Ryan Schoettler who both spent the duration of their WHL tenure in Prince George playing three and four years respectively.

The Vancouver Giants will have a new look next season following the departure of three key players including starting netminder David Tendeck, a 2018 sixth-round selection now signed by the Arizona Coyotes who is expected to suit up in the AHL in the coming campaign. This season, Tendeck impressed in finishing with a 2.29 goals-against average through 35 appearances, good for fifth-best league-wide.

Also moving on from the Giants is overage forward Tyler Preziuso who leads the entire CHL graduating class with 327 career  games, and unsigned Calgary Flames 2018 draft pick Milos Roman who played the last three seasons in Vancouver after being the club’s sixth overall pick in the 2017 CHL Import Draft.

A Giant thank you goes out to our overaged players from the 2019-20 season. Tyler, David, and Milos, congratulations on your excellent careers and we appreciate your leadership on our team. pic.twitter.com/9ddE8epo9u

Rounding out the B.C. Division, the Victoria Royals will see three graduates including 1999-born netminder Shane Farkas who finished second league-wide in both the goals-against average (2.20) and save percentage (.929) columns this season while coming away with the victory in 18 of his 28 appearances.

Other graduates from the Royals include Gary Haden and Will Warm who both played their overage seasons in Victoria to cap four-year WHL careers.

A fantastic & humorous person off ice & ultimate competitor on it, thank you @sfarkas37 for a great year! From your constant laughter to strong work ethic you came to the rink w/ positive energy that made ppl smile. Your time in #yyj will be remembered & we wish you all the best! pic.twitter.com/R0bR5IP9Yf

Successful seasons with the Everett Silvertips saw the team’s entire overage trio land entry-level contracts late in the year, headlined by defenceman Jake Christiansen who despite being limited to 38 games dazzled with a 50-point season to finish ninth in league scoring among rearguards, ultimately helping him secure a three-year pact with the Columbus Blue Jackets.

Furthermore, the Silvertips saw veteran forward and undrafted free agent Bryce Kindopp sign on with the Anaheim Ducks after scoring a team-high 40 goals, while the Philadelphia Flyers came to terms with defenceman Wyatte Wylie, a fifth-round selection from the 2018 NHL Draft who scored 64 points in 62 games.

We will remember you. pic.twitter.com/XWzAEAhw12

Four players could move on from the Portland Winterhawks beginning with St. Louis Blues prospect and Canadian World Junior hero Joel Hofer, whose performance between the pipes on the national stage this year helped the Great White North capture its 18th gold medal at the annual classic. The soon-to-be 20-year-old is eligible to return as an overager but could earn a spot with the Springfield Thunderbirds, who will become the Blues’ top minor-league affiliate beginning next season.

Other graduates from the Winterhawks include 1999-born forwards Lane Gilliss and Jake Gricius, plus defenceman Matthew Quigley who all made their way to Portland as free agents in 2016. 20-year-old captain Johnny Ludvig is expected to turn pro after recently signing with the Panthers.

Thank you to our 20-year-olds!

A trio of players are set to graduate from the Seattle Thunderbirds highlighted by overage forward Andrej Kukuca, the club’s top selection from the 2018 CHL Import Draft who also led the squad in scoring in 2019-20 with 57 points through 63 appearances.

Rounding out the list of graduates from the Thunderbirds includes captain Conner Bruggen-Cate who has committed to St. Francis Xavier University, overage centre Max Patterson who appeared in an impressive 320 career regular season games.

Oh Captain My Captain!@bruggen_cate thank you for your leadership, toughness, and heart this season. We want nothing but the best for you moving forward! #OnceABirdsAlwaysABird pic.twitter.com/BBRk7gI6vC

The Spokane Chiefs could see as many as four players depart with captain and New Jersey Devils first-round pick Ty Smith key among those names. While eligible to return as an overager, the reigning CHL Defenceman of the Year is expected to earn a spot with the Devils after making a strong impression last fall. New Jersey originally selected Smith 17th overall in the 2018 NHL Draft with the World Junior gold medalist scoring 59 points in 46 games this season.

🇨🇿 | Coming to the PNW from the other side of the world, @MapleLeafs prospect Filip Král became a fan favorite & one of the best D to ever suit up for the Chiefs.

A pair of players will graduate from the Tri-City Americans including captain Krystof Hrabik who despite being limited to 42 appearances this season finished third in team scoring with 31 points. The 1999-born forward is set to join the AHL’s San Jose Barracuda for the coming campaign after signing an AHL deal a year ago.

Also graduating from the Americans is fellow 1999-born forward Jadon Joseph whose WHL career comes to a close having played 253 games between six different clubs where he amassed 133 points.

Thank you to our 20-year-olds, Jadon and Krystof, for their contributions to our team and community.