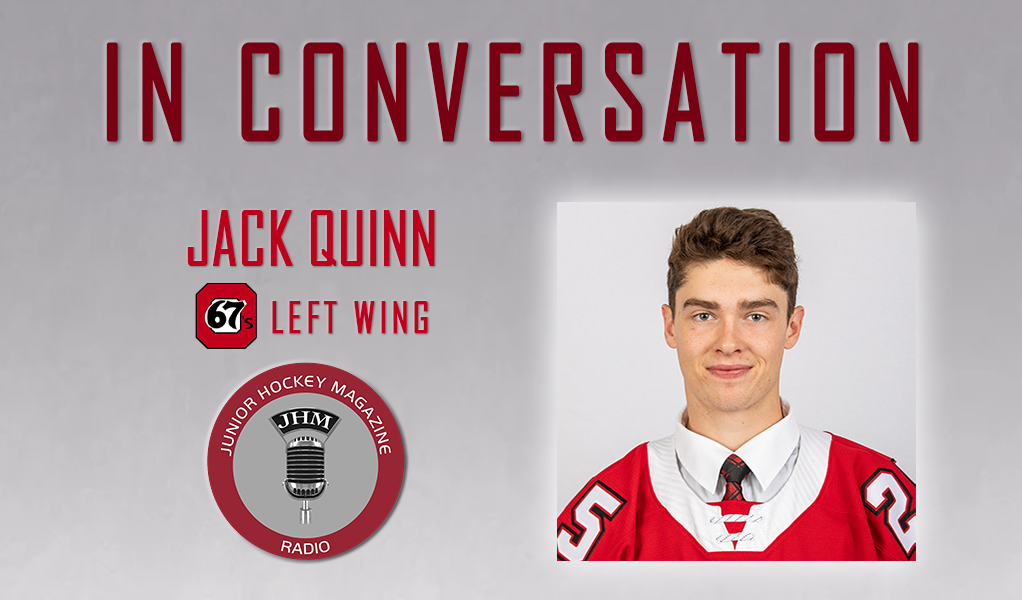 The top goal scorer available in this year’s draft class, the Ottawa 67’s left winger was one of just two players across the CHL to break the 50-goal plateau this season as he wrapped up 2019-20 with an impressive 52 markers across just 62 appearances.

The budding sniper, who ranks seventh among North American skaters per NHL Central Scouting, recently sat down with Junior Hockey Magazine to discuss the upcoming NHL Draft, how he is preparing for that special day despite uncertain times, and what it was like to share his draft year experience with teammate Marco Rossi:

Junior Hockey Magazine: How are you handling this big pause right now?

Jack Quinn: I think the same as everybody else, staying at home and trying to keep busy. That’s pretty much all you can do right now.

JHM: You’re in a situation where you are up for the draft this year. You wanted to show what you could do, and you have clearly done a lot of that, but you’re also on a really good team that had a good run, and that could have made a long run this year. How difficult was that to see your season shut down?

JQ: I have been asked that a lot and still can’t come up with one good answer. I think it’s just a lot of disappointment, especially with last year in getting all the way to the finals and losing. We wanted to prove ourselves this year and we were looking forward to that opportunity. To not get that is a little disappointing.

JHM: When the final rankings came out from NHL Central Scouting you were the seventh-ranked North American skater on their list. It’s kind of unfortunate now in the way that the NHL Draft could potentially unfold, but you have obviously garnered a lot of respect, and there are a lot of people out there suggesting that you could be the best pure goal scorer in this year’s draft. What’s it like to be rated No. 7 and to hear that being said about you?

JQ: Since the end of the season, there has been a lot of talk and a lot of stuff on social media. All of it’s a pretty big honour, neat to see, and pretty surreal to hear those kinds of things. I think I have come a long way over the course of the year and my rise and how I have improved with all that is something that I am proud of.

JHM: Our director of scouting Craig Button compares you to David Pastrnak. What’s it like to hear something like that?

JQ: It’s pretty surreal. He is one of my favourite players to watch and he is so exciting every time I watch him. It’s a good motivation.

JHM: I heard that you didn’t start training in the offseason until you were 15 or 16 years old, and then you started working out with Tony Greco who has worked with guys like Claude Giroux. What’s that been like? What motivated you to add this aspect to your game? What has it meant to you in terms of your on-ice ability now?

JQ: It was my minor-midget year – my OHL Draft year – and I was doing all right but I just kind of realized that I had a pretty good opportunity here and started really working hard, working on my skating, all that stuff. This past summer was my first with Tony and it was another big jump for me fitness-wise, and I think it really showed on the ice and in my play. I think I owe a lot to Tony as he really helped my game this year.

JHM: Your teammate Marco Rossi is also projected to go in the Top 10. He led the OHL in scoring with 120 points. What was it like to go through your draft year with a guy like Marco Rossi maybe pushing you?

JHM: You played AA earlier in your minor hockey and didn’t get an opportunity to play AAA. Was there a particular moment where things just clicked for you or something that motivated you to be better than you were?

JQ: When I was younger, the AAA teams cut me. It was probably the last year of AAA that I got cut where I just told myself that they didn’t think I was good enough but I knew I was, so it was more of just proving to them that I am and it end up working pretty well over the course of a couple of years.