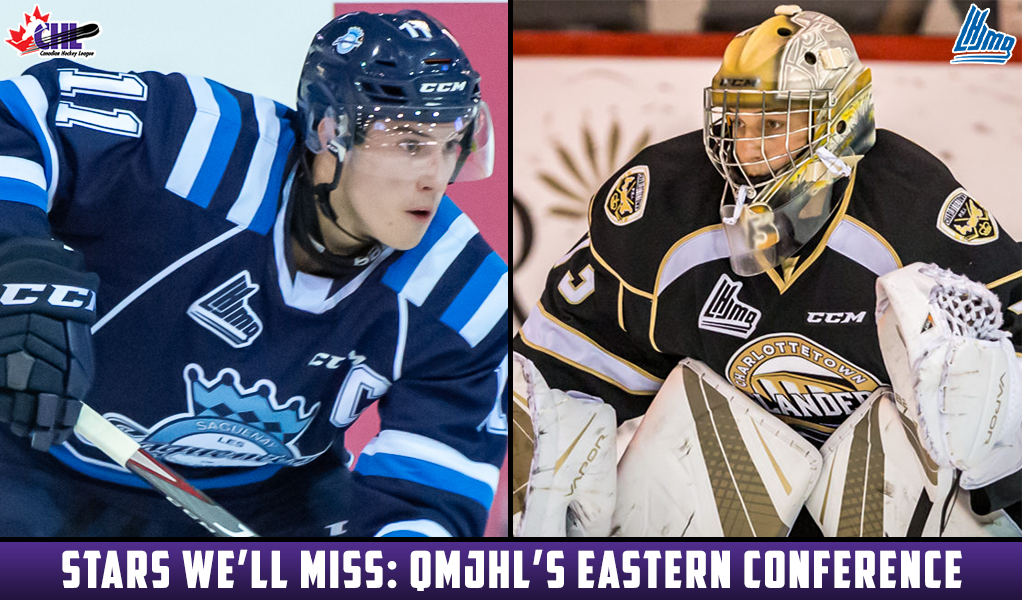 A trio of overagers are set to graduate from the Baie-Comeau Drakkar headlined by veteran forward Gabriel Proulx who wrapped up his final season with a career best of 52 points to finish second in team scoring. The native of Beloeil, Que., has committed to Concordia University for the coming campaign where he will play for the Stingers.

Also graduating from the Drakkar is overage forward Charles-Antoine Giguere (Concordia University), whose junior career spanned 181 contests with three different clubs, as well as 1999-born defenseman Keenan MacIsaac who won a Memorial Cup title with the Acadie-Bathurst Titan in 2018 and will compete at the University of Ottawa next season for the Gee-Gees.

The Chicoutimi Sagueneens will have a refreshed look next season following the likely departure of five players beginning with captain and overage forward Rafael Harvey-Pinard, whose junior career counted 248 total games and an impressive 262 points. The pro bound Montreal Canadiens pick in 2019 also led the Rouyn-Noranda Huskies to a QMJHL title and Memorial Cup championship last spring.

Other graduates from the Sagueneens include 1999-born forward Felix Bibeau, a signed 2019 New York Islanders pick who claimed CHL supremacy alongside Harvey-Pinard last season and looks back on a 214 point career over 245 games. Overage blue-liner Patrick Kyte also moves on with a commitment to St. Francis Xavier University to play for the X-Men in 2020-21. 2000-born forwards expected to turn pro include Raphael Lavoie (Edmonton Oilers) and Vladislav Kotkov (San Jose Sharks) who have both signed their entry-level contracts. Lavoie led the Sags in scoring with 82 points in 55 games split between Chicoutimi and Halifax, while Kotkov produced 46 points in 51 games.

Three overagers will depart from the Quebec Remparts beginning with captain Anthony Gagnon, who concludes his QMJHL career with 278 regular season games played with three different teams where he generated 131 points. The 21-year-old will join the Concordia University Stingers next season.

Also graduating from the Remparts is 1999-born defenceman Darien Kielb, who had a breakout campaign in 2019-20 amassing 45 points to finish sixth in scoring among league rearguards, as well as veteran netminder Tristan Cote-Cazenave who will join the University of Quebec at Trois-Rivieres next season after 153 games in the Q.

Lastly, the Rimouski Oceanic have at least four players who are likely candidates for departure headlined by 2000-born forward and Calgary Flames prospect Dmitry Zavgorodniy who is eligible to begin his pro career next season after signing his entry-level contract. The Russian-born forward impressed in 2019-20 tallying 67 points in only 40 appearances and finishes his career with a better than point-per-game pace with 178 in 169.

Also graduating from the Oceanic are the club’s three overagers including forward Nicolas Guay who departs for the University of New Brunswick Reds with 266 games and 240 points under his belt. Cedric Pare finished the season seventh in league scoring with 88 points to bring the former QMJHL champion to 191 over 261 career games, and veteran defenceman Walter Flower wraps up his junior career with 261 games and 76 points.

A trio of overagers will graduate from the Acadie-Bathurst Titan headlined by Remy Anglehart who led the squad in scoring in 2019-20 after collecting 54 points through 64 appearances. Anglehart will join the University of Moncton for the coming campaign where he’ll play for les Aigles-Bleu.

Also graduating is captain Yan Aucoin, who after a 319-game QMJHL career on the blue line will continue on his hockey and academic path with Concordia University next year, and veteran netminder Tristan Berube who will join the University of Ottawa Gee-Gees in 2020-21 after 153 QMJHL games.

Upwards of five players could graduate from the Cape Breton Eagles headlined by starting netminder and Ottawa Senators prospect Kevin Mandolese who recently inked an entry-level contract. Born in 2000, Mandolese, who this season led all QMJHL goaltenders with a .925 save percentage, is eligible to begin his pro career next year.

Other graduates from the Eagles counts three overage forwards including captain Derek Gentile who will follow up his 310-game QMJHL career in attending Dalhousie University where he’ll play for the Tigers. In addition, 2019 Memorial Cup champion Tyler Hinam will return home to play for the Acadia University Axemen, and Minnesota Wild pick Shawn Boudrias wraps up his junior career with 286 total appearances coming with three different clubs. Furthermore, the Eagles are expected to see the departure of 2000-born and signed St. Louis Blues prospect Mathias Laferriere who scored 48 points in 40 games this season.

The Cape Breton Eagles would like to thank and congratulate 20 year olds Derek Gentile, Shawn Boudrias, and Tyler Hinam as we look back at their time with the Eagles and in the QMJHL.https://t.co/uQVGeXRuiQ pic.twitter.com/1GWff9EY8e

Four players are set to graduate from the Charlottetown Islanders headlined by 1999-born netminder Matthew Welsh who this season took command of the QMJHL record for all-time minutes played by a goaltender that stood at 13,080 minutes when the 2019-20 season ended. Impressively all 224 of his career games were played in the Charlottetown crease.

Also graduating from the Islanders are fellow overagers in forward Ethan Crossman as well as defenceman Brendon Clavelle, both of whom have committed to St. Francis Xavier University next season. Crossman played 236 career games and was a member of the 2018 champion Titan, while Clavelle served as captain in his third and final season on the island. Additionally, 2000-born forward and St. Louis Blues prospect Nikita Alexandrov is expected to begin his pro career in 2020-21. The second round pick in 2019 led the team in scoring this season with 54 points in 42 games.

His major junior career may be over, but Matthew Welsh's legacy in Charlottetown will be felt for years to come.

Three overagers will graduate from the Halifax Mooseheads beginning with 258-game veteran D’Artagnan Joly who suited up for four clubs over the course of his junior career amassing 204 points between the Gatieneau Olympiques, Baie-Comeau Drakkar, Rimouski Oceanic, and the Mooseheads.

Other graduates include forward Kevin Gursoy who finished the season as the team’s top scorer with 56 points in 65 games including 30 in 30 with Halifax following a trade from Charlottetown, and defenceman Denis Toner who played two full seasons with the Mooseheads and will join the University of Moncton in 2020-21.

These players didn't get to finish the season the way they had hoped so let's show the 20's some love online. @denistoner @KevinGursoy @dartagnanjoly #GoMooseGo pic.twitter.com/1ud0k23oo3

Fans of the Moncton Wildcats may need a lineup card next season with nine players projected to graduate headlined by leading scorer and 2000-born forward Alexander Khovanov who is expected to begin his pro career with the Minnesota Wild organization next season. The Russian scored 99 points in 51 games to bring his impressive three-year totals to 201 points in 144 games which is the best career points-per-game rate among the 2000 class.

Additionally, the Wildcats will see the departure of three overagers including forward Jeremy McKenna who recently inked a minor-league contract with the AHL’s Toronto Marlies after leading the 1999 graduating class with 137 career goals in 259 games in Moncton. Mika Cyr also spent his entire career with the Wildcats spanning 212 games and will remain local next season attending the University of Moncton where he’ll play for les Aigles-Bleu. Defenceman Christian Huntley, whose QMJHL career concludes at 303 total games, including just 32 with the club, will also bid farewell to the league. Furthermore, the Wildcats could see five more 2000-born players begin their pro careers next season after signing NHL entry-level contracts counting forwards Gabriel Fortier (Tampa Bay Lightning) and Benoit-Olivier Groulx (Anaheim Ducks) as well as defencemen Axel Andersson (Anaheim Ducks) and Jared McIsaac (Detroit Red Wings) plus goaltender Olivier Rodrigue (Edmonton Oilers). Fortier spent the majority of his career with the Drakkar and served as captain this season until traded, while Groulx and McIsaac also joined the team midway through this season from the Mooseheads. Groulx won the league’s Best Defensive Forward award, and McIsaac was a member of Canada’s National Junior Team. Andersson played just 43 games in the QMJHL while Rodrigue, another World Junior gold medalist, departs as one of the league’s greats earning 111 career wins.

Drafted by the Wildcats in 2015, McKenna played 259 games in a Wildcats jersey. Recording more than a point per game in his four seasons.

During the past 3 seasons he also earned the title of top goal scorer on the team.

The Saint John Sea Dogs will see the departure of a trio of overagers led by forward Jeffrey Durocher who will follow up his 311-game QMJHL career coming with three different clubs in attending Concordia University.

Other graduates from the Sea Dogs include 1999-born forward and Acadia University commit Nicholas Deakin-Poot who combines 127 games in the QMJHL with an additional 62 OHL games, and veteran netminder Zachary Bouthillier, a 2018 pick of the Toronto Maple Leafs, who concludes his QMJHL days following a season in which he made a career high of 45 appearances, and who will now continue at the University of Quebec at Trois-Rivieres.

We recently surpassed 2 MILLION fans who have attended a Saint John Sea Dogs home game in our 15 year history! #SeaDogs15

Thank you Saint John for your continued support and making us YOUR TEAM!

We invite all 2 million of you to join us for our home games this weekend! #QMJHL pic.twitter.com/aCLdv5IG6H