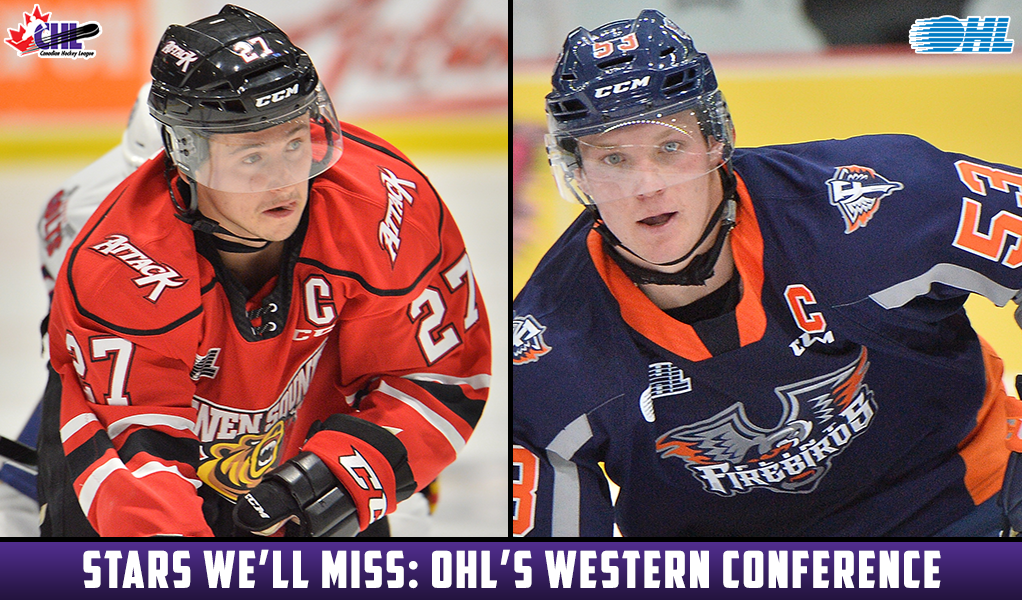 The Erie Otters will see the departure of a pair of overagers beginning with defenceman Drew Hunter (Western University) who after beginning his OHL career with the Niagara IceDogs in 2016-17 joined the Otters in November of this season. Hunter concludes his career with 73 points coming in 212 total appearances.

Fellow 1999-born blue-liner Jacob Golden, who joined the league as a 15th round pick by the London Knights, matched Hunter’s 212 career contests upon his OHL graduation.

Today was to be our final game of the regular season where we planned to honor our overage players. We know this isn't the same as playing at the EIA, but we're here to recognize Jacob Golden and Drew Hunter for their dedication to the Otters organization. pic.twitter.com/Yn4qCIJgSM

Four OHL champions are set to graduate from the Guelph Storm headlined by 1999-born defenceman Fedor Gordeev, a 2017 draft choice of the Toronto Maple Leafs who later joined the Minnesota Wild. Following 253 contests and a 2019 title, Gordeev will begin his pro career next season with the Wild organization.

Also graduating from the Storm is captain Cam Hillis, a 2000-born forward who recently inked an entry-level contract with the Montreal Canadiens, overage forward Cedric Ralph, who spent his entire junior career with the club spanning 241 games and 137 points, as well as veteran rearguard Josh Wainman (Dalhousie University) who appeared in 254 games in stints with three different teams including the 2017 champion Otters.

With the cancellation of the 2019-20 season, unfortunately we didn’t get the chance to thank our OAs the way we would have wanted. ⠀
Over the next couple of days we will honour the careers of Josh Wainman, Fedor Gordeev and Cedric Ralph. pic.twitter.com/zclRqt4bUy

The Kitchener Rangers could see the departure of six players including trade deadline addition Serron Noel, a 2000-born forward and signed Florida Panthers prospect who is expected to turn pro next year. Noel produced 202 points over four seasons in the OHL totalling 241 games, including 220 with the Oshawa Generals.

Also moving on from the Rangers is overage forward and co-captain Greg Meireles, another Panthers pick, whose 244 career contests all came with Kitchener where he scored 239 points since being the club’s 12th overall pick in 2015. Fellow overage forward Jonathan Yantsis spent all of his 214 games with the club and scored an impressive 97 goals including 50 last season after signing as a free agent in 2017. Additionally, overage forward Liam Hawel departs for the AHL’s Laval Rocket with a fresh contract signed and 313 OHL games under his belt along with a Storm championship ring. Also expected to turn pro is 2000-born forward, co-captain, and Dallas Stars prospect Riley Damiani who scored 222 points in 245 games for the blue shirts, and soon-to-be 20-year-old netminder Jacob Ingham, a recently signed draft pick of the Los Angeles Kings, who won 33 of his 46 games this season in Kitchener.

Congratulation to each of our graduating players on successful #OHL careers!

The London Knights will also have a new look next season with seven players expected to graduate, headlined by puck-moving blue-liner Ryan Merkley, a 2000-born first-round selection of the San Jose Sharks who impressed with a 76-point campaign. Originally chosen first overall in the 2016 OHL Priority Selection, Merkley’s career has counted stops with three teams in which he has amassed 269 points in 248 games which ranks sixth all-time in OHL scoring among defencemen.

Also slated to move on from the Knights includes another 2000-born first-round selection in forward and co-captain Liam Foudy, who this season won World Junior gold and made his NHL debut with the Columbus Blue Jackets on an emergency recall. Fellow 2000-born forward Jonathan Gruden is a signed Ottawa Senators prospect also eligible to turn pro after his single OHL season, while 2000-born blue-liner and co-captain Alec Regula who was shipped from the Detroit Red Wings to the Chicago Blackhawks last season and is expected to turn pro following 189 games in London over three seasons. Additionally, the club will see the departure of overage forward Jason Willms, the OHL’s most successful centreman in the face-off circle this season, who is bound for the University of New Brunswick to play for the Reds. Overage defenceman and signed Los Angeles Kings prospect Markus Phillips skates away from 284 games over five seasons including last year’s OHL championship run with Guelph, as well as overage netminder Dylan Myskiw (Western University), who previously suited up in the WHL before joining the Knight this season.

Lastly, four players are expected to move on from the Owen Sound Attack beginning with captain and 2000-born forward Aidan Dudas. The Parry Sound, Ont., native, who has spent his entire junior career with the Attack, spanning 240 games, is expected to join the pro ranks next season with the Los Angeles Kings organization who selected him in the fourth round of the 2018 NHL Draft and then signed him in the midst of his gold medal performance at World Juniors.

Also moving on from the Attack are overage forwards Matthew Philip who has committed to St. Francis Xavier University after a 227 games career, and Matthew Struthers, who after 298 games has landed a minor-league contract with the AHL’s Cleveland Monsters. Owen Sound will also see the departure of 1999-born rearguard Brady Lyle to the AHL as the club’s all-time goal scoring leader among defencemen recently signed with the Providence Bruins.

Three of the greatest young men you'll ever meet.

Devastated that we won't be able to give them one last run, but their stories will not stop here.

Be proud of everything you accomplished in your OHL careers.#MadeForMore pic.twitter.com/oZv74LX0r0

The Flint Firebirds will follow up their most successful season in franchise history with a refreshed look next year as five players are expected to graduate. The list fittingly begins with their captain and face of the franchise Ty Dellandrea who is anticipated to begin his pro career in the coming season with the Dallas Stars organization who selected him in the first round of the 2018 NHL Draft. This year saw Dellandrea win World Junior gold and become Flint’s all-time leader in all major offensive categories including 216 points scored over four seasons.

Also moving on from Flint are a trio of overagers including forwards Jake Durham, who played a franchise record 265 games with the Firebirds, as well as Jack Phibbs who skated in 233 games with the club before committing to the University of Waterloo for the coming campaign with the Warriors. Additionally, the club will see the departure of 1999-born netminder Anthony Popovich, a Queen’s University commit whose OHL career counts 95 victories and a championship with Guelph last spring. Lastly, 20-year-old blue-liner and signed St. Louis Blues prospect Tyler Tucker is expected to join the pro ranks next season after playing 244 career games between the Firebirds and Barrie Colts.

Six players are expected to move on from the Saginaw Spirit led by signed Minnesota Wild prospect Damien Giroux, a 2000-born forward who is slated to turn pro next season following four seasons with the franchise spanning 249 career games and 194 points. While Giroux served as captain the Spirit captured two straight West Division titles.

The club will also see the departures of overage forwards like 1999-born Cole Coskey, a signed New York Islanders pick who skated in a franchise record 302 games with the Spirit over five seasons, 2000-born forward Blade Jenkins who has also put pen to paper with the Islanders, and D.J. Busdeker, a Michigan native who recently landed an AHL contract with the Rockford IceHogs following 235 games with his local team. Additionally, the Spirit will be without overage blue-liner Reilly Webb who turns to Acadia University after 198 career games, while fellow rearguard and Islanders prospect Bode Wilde is expected to return to the pro ranks after seeing a 20-game trial with the AHL’s Bridgeport Sound Tigers earlier this season.

A trio of overage players will graduate from the Sarnia Sting beginning with longtime captain Ryan McGregor, an unsigned Toronto Maple Leafs draft choice who recently landed a two-way agreement with the Arizona Coyotes. The Burlington, Ont., native spent his entire junior career with the Sting, amassing 228 points in a franchise record 286 games.

Also graduating from the Sting is forward Sean Josling, whose four seasons with the club began as a free agent signing in 2016 and totaled 250 games, as well as 1999-born defenceman Kelton Hatcher, the son of Sting head coach Derian Hatcher, who appeared in 209 games with the club over four campaigns.

Thank you for everything you gave to our city you were leaders on the ice, role models in our community and thrill to watch each and every night.
#TheFlipSide | #MoreThanAGame pic.twitter.com/Mcc3FQ1lof

A pair of overagers will move on from the Soo Greyhounds including forward Jaden Peca who wraps up his OHL career with 134 points coming in 244 total appearances split between the Greyhounds and Barrie Colts.

The Greyhounds will also see the graduation of netminder Bailey Brkin, who joined the club in 2019-20 and played 31 games after previously suiting up in the WHL for 89 career games.

The Windsor Spitfires will bid farewell to their overage trio that includes the franchise’s all-time games played leader and captain Luke Boka (Queen’s University) who totaled 313 games and 140 points since 2015. Boka was also part of the club’s Memorial Cup championship on home ice in 2017.

Also graduating is forward Cole Purboo (University of Toronto) another 2017 Memorial Cup champion, who appeared in 263 games and scored 165 points over four seasons with the Spitfires, as well as 1999-born defenceman Thomas Stevenson who has committed to Queen’s University where he will use his league scholarship package to play for the Gaels.