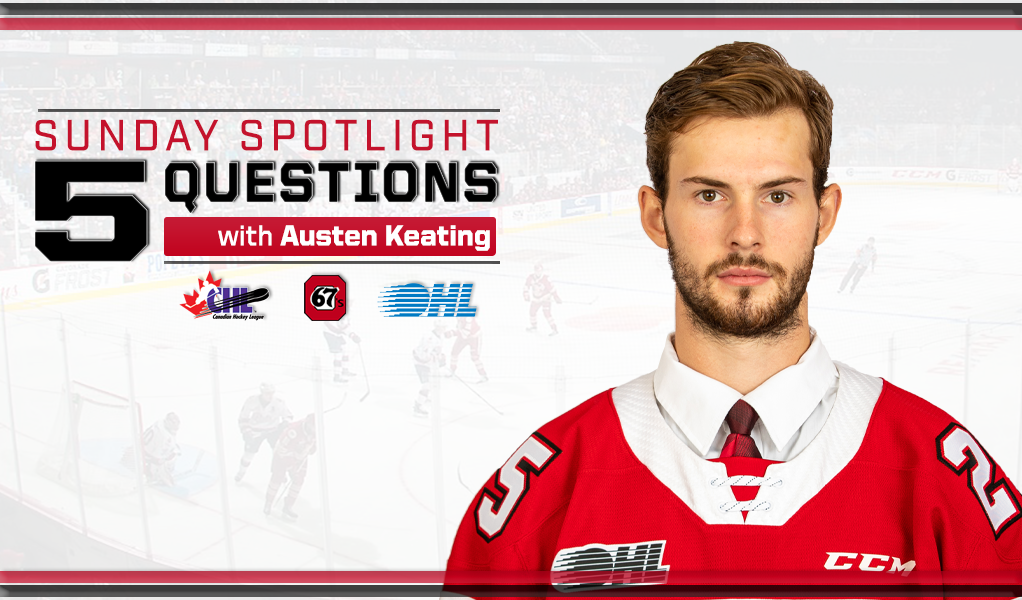 It’s a prestigious career target for both games and points reached by a small group of veteran players every year. The group of players to surpass 300 in both categories is even more exclusive and among the league’s 2019-20 class of graduates it includes just one; Austen Keating.

The Ottawa 67’s forward recorded 89 points including 32 goals and 57 assists over 58 games this season to earn the Ontario Hockey League’s Leo Lalonde Trophy as Overage Player of the Year. His efforts bring his career totals to 325 points in 309 games spent entirely in the famous barber pole uniforms worn in our nation’s capital and is the first player in franchise history to join that double 300 club.

Keating helped the 67’s achieve back-to-back 50 win seasons and OHL regular season titles and prepares to join another organization with a successful history in U SPORTS competition making a recent commitment to the University of New Brunswick Reds.

The 21-year-old Guelph native recently chatted with the CHL and reflected on his time in the league.

How have you stayed busy at home and what’s been your favourite TV show or online program to watch?

It’s definitely been tough trying to find things to do right now during these difficult times but I’ve been doing a lot of yard work outside, cutting the grass, pulling a lot of weeds, and putting mulch around the yard. I’ve also been watching a lot of NetFlix and I think my favourite show right now is Ozark. I started watching it as soon as I got home and I’ve been hooked ever since.

Can you put into words playing over 300 career games and scoring more than 300 points in five seasons with the 67’s?

It’s a pretty cool achievement. To be able to do that in such an amazing junior league with all of the incredible players I had a chance to play with and against. But I think a lot of it goes back to the trainers in Ottawa making sure I was healthy, and when I was hurt, making sure that I was getting back and I was ready to go. Also I think Derek Miller and his group along with Sean Young and his group were huge for me just getting better each and every day working on little things and getting stronger. I think lastly the coaching staff in Ottawa and my teammates for allowing me to play my game and to succeed.

How does it feel to end your career being named the OHL’s Overage Player of the Year?

It’s a huge honour to be able to receive this award. You look at all of the talented overagers that were in the league this year, and to be able to get this prestigious award is a huge privilege. I think it’s a team award in my opinion. My teammates did such a great job working every day. Our practices were so intense that we just pushed each other. The coaching staff in Ottawa were unbelievable with Andre (Tourigny), Norm (Milley), and Mario (Duhamel) who are truly geniuses when it comes to the game of hockey. As long as the management that they have is there they are going to succeed for a very long time.

What are some of your most memorable moments in Ottawa?

I think just the whole playoff run last year itself. I think that takes the cake. Winning 14 in a row. Some of the games that we played were just such a blast. The Sudbury triple overtime game, Game 4 of the Conference Final against Oshawa we scored with 30 seconds left and then scored right at the start of overtime to win the East. Just that whole playoff run was just so much fun. That team that we had in there, we were so close, we’ll be brothers for life. The friendships that we made are unbreakable and I still talk to all of those guys to this day and it’s something that I wouldn’t change and something that I’ll remember for the rest of my life.

Is it exciting knowing that next season you’ll be able to continue your hockey and education at UNB?

Yeah, I’m really excited to be going to UNB. They have one of the top development programs in the country and all of their success in recent years just shows how incredible their program is. Not only do they have top notch players, but they have top notch people as well. Their management is just unbelievable and I can’t wait to get down there and get settled.