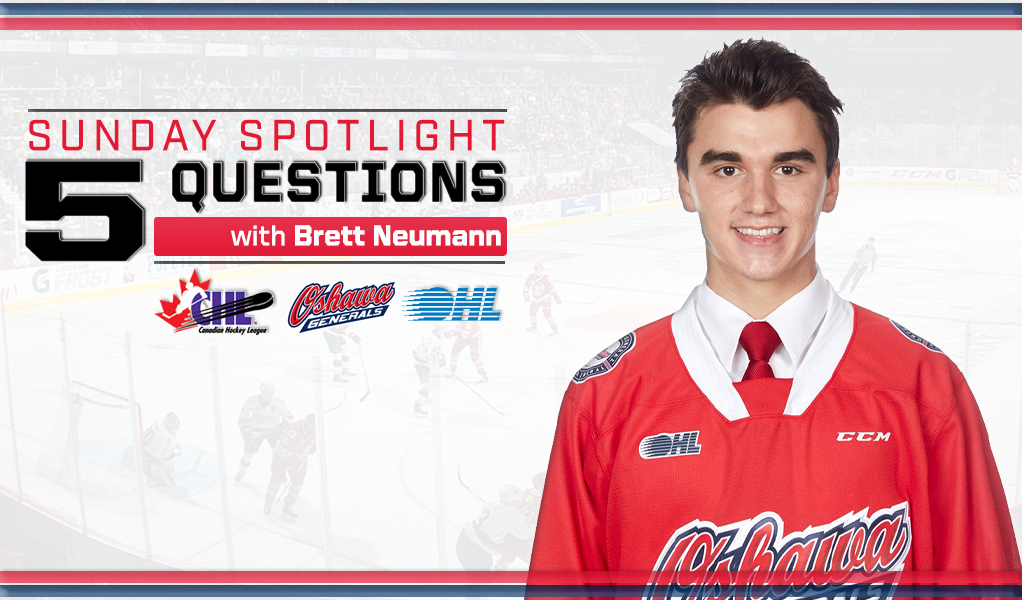 Brett Neumann’s end of the season reflections are both thoughtful and thorough.

It should come as no surprise given his 318 career games played with three different teams are the most by any member of the OHL’s graduating class of overagers making many memories to say the least.

From the Erie Otters in 2015-16, to the Kingston Frontenacs the following season, and finally landing with the Oshawa Generals midway through the 2018-19 campaign, the well traveled Toronto native has had a lot of experience and a lot of success.

Back-to-back 45-goal seasons helped him accumulate 128 tallies over his five-year career which ranks first among all 1999-born OHL talents while adding 116 assists for 244 points in that time. Most impressively, however, is his unique place in OHL history as the league’s new ironman playing in a record 311 consecutive games dating from November 26, 2015, to the end of the current campaign. This streak surpasses the previous OHL record of 272 held by Bobby Chaumont of the Sudbury Wolves (2001-05) and puts him tied for third in CHL history behind the QMJHL’s Eric Betournay (314) and the WHL’s Justin Feser (321).

Just days following the official cancellation of the regular season, playoffs, and Memorial Cup championship, Neumann graciously took time to share his thoughts with the Canadian Hockey League, as we look forward to his next chapter.

What have the last couple of weeks been like at home?

Well I was definitely the last person to expect that my OHL career would end this way. It’s been really bittersweet coming home. I’ve gotten to spend some really good quality time with my family, we’ve been watching a lot of movies, but at the same time I’d much rather be playing playoff hockey in Oshawa competing for an OHL championship in front of our great fans.

What comes to mind as you reflect on your season and career after playing an incredible 318 regular season games with three different teams?

You know when I look back, coming into the league, being drafted by the Erie Otters, I was very lucky to be around some very prominent players. Guys like Dylan Strome, Alex DeBrincat, Travis Dermott just to name a few, and you really learn a lot from them. They were great hockey players in the league and they’re all doing very well playing pro right now.

Then going into Kingston I started to get a little bit more of an opportunity and I think that’s where I really started to assert myself as more of an offensive player in the league.

And then, obviously coming into Oshawa, I’ve got nothing but great things to say about that organization and how fun it is to play in a city like Oshawa in a sold out building every night. It was truly amazing.

Looking back as a whole, I’d say especially these last two years were very memorable. Scoring back-to-back 45 goal seasons. I think that’s pretty special and that’s going to stick with me for a while. But looking at the big picture I was very lucky to be a part of three great organizations and great people involved with all three of those organizations and have some great teammates along the way.

Do you have a most memorable moment or game from your time in the league?

Wow looking back, there’s been a lot of ups and downs, a lot of amazing moments. One that really sticks out to me would be my last year in Kingston. We were a rebuilding team that year, we just traded away our leading goal scorer in Jason Robertson, and as a result of that a lot of people thought that my production would go down. But in fact I was able to increase my production. I even put together three hat-tricks in five games and I think a lot of people around the league took notice and I would say that was probably the defining moment of my career.

Was there a particular person or people that really helped you throughout your career that you’d like to thank?

Well this may sound a little corny but like many other players I wouldn’t have had an OHL career without the tremendous support of my family. Ever since the first day I put on skates through every level of hockey they’ve always been there to support me an encourage me every step of the way. There are also many other individuals that have played a key role in my development, far too many to thank in a short video like this, but for those people they know who they are and for them I’m very grateful.

What’s next for Brett Neumann?

Well a lot of people have been asking me that one. I’m going to keep it to myself for now. What I will say though is I’m not quite done playing hockey just yet and hopefully you all hear from me soon.