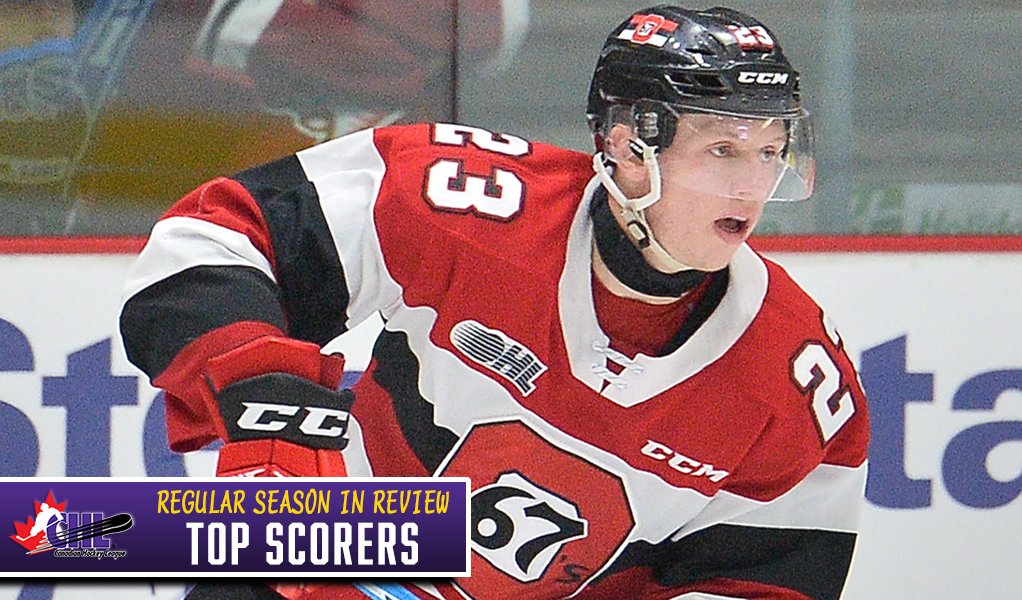 With the 2019-20 campaign concluded, the Canadian Hockey League is reviewing this season’s top performers:

After finishing second among all OHL rookie scorers a year ago, no player got his name on the score sheet more often this season than 2020 NHL Draft top prospect Marco Rossi of the Ottawa 67’s.

Finishing with 120 points counting 39 goals and 81 assists through 56 appearances, the No. 5 ranked North American skater is a dynamic offensive presence who is equally impressive in his own end, making him a strong candidate to hear his name called early in the coming NHL Draft.

Rossi held an eight-point lead on Rimouski Oceanic captain Alexis Lafreniere, the reigning CHL Player of the Year and 2020 NHL Draft favourite who led the QMJHL in scoring with 35 goals and 77 assists for 112 points in 52 outings. In the WHL, top scoring honours belong to Minnesota Wild prospect Adam Beckman of the Spokane Chiefs whose breakout campaign saw him collect 48 goals and 59 assists for 107 points in 63 games. Beckman finished fourth across the circuit behind NHL Draft prospect Cole Perfetti who recorded a Saginaw Spirit record 111 points in 61 games. 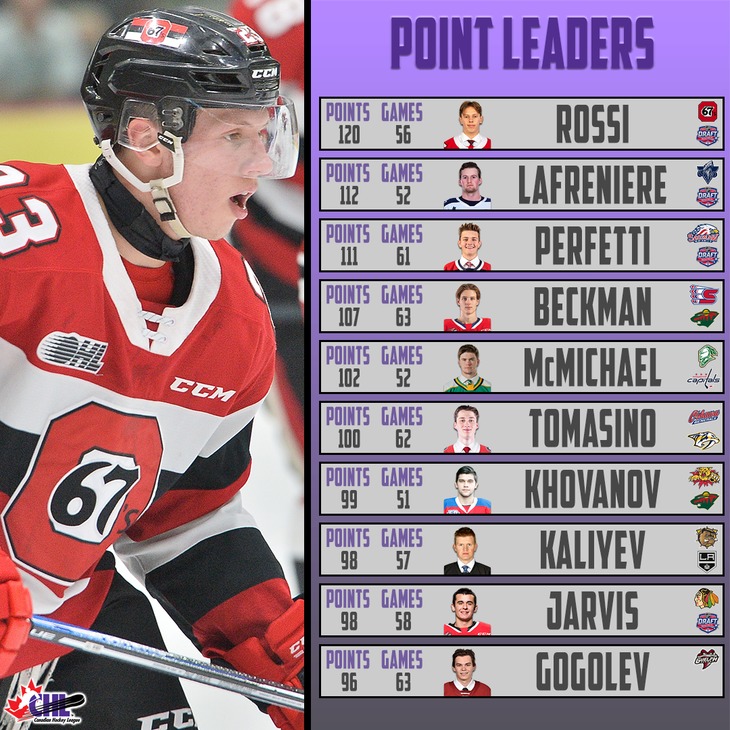 The Toronto Maple Leafs appear to have made a savvy selection in Peterborough Petes left-wing Nick Robertson.

Chosen 53rd overall in the 2019 NHL Draft, the Northville, Mich., native found the back of the net with regularity this season, scoring well above a goal-per-game pace in tallying 55 times in only 46 appearances – more than doubling last year’s 27-goal output – and finishing as one of just two players from across the CHL to break the 50-goal plateau this season.

Beyond Robertson, top goal-scoring honours across the circuit belonged to Spokane’s Adam Beckman, who not only led the WHL in point production but was also one of only four players from his league to light the lamp 40 or more times this season. From the QMJHL, Cape Breton Eagles left-wing Egor Sokolov led the way with a dazzling 46-goal season, helping him clock in at No. 94 among North American skaters per NHL Central Scouting after going unselected in the past two NHL drafts. Projected first round NHL Draft pick Jack Quinn (52) of the Ottawa 67’s was the only player behind Robertson to surpass the 50-goal milestone, while Washington Capitals first round selection Connor McMichael (47) of the London Knights finished just ahead of Sokolov. 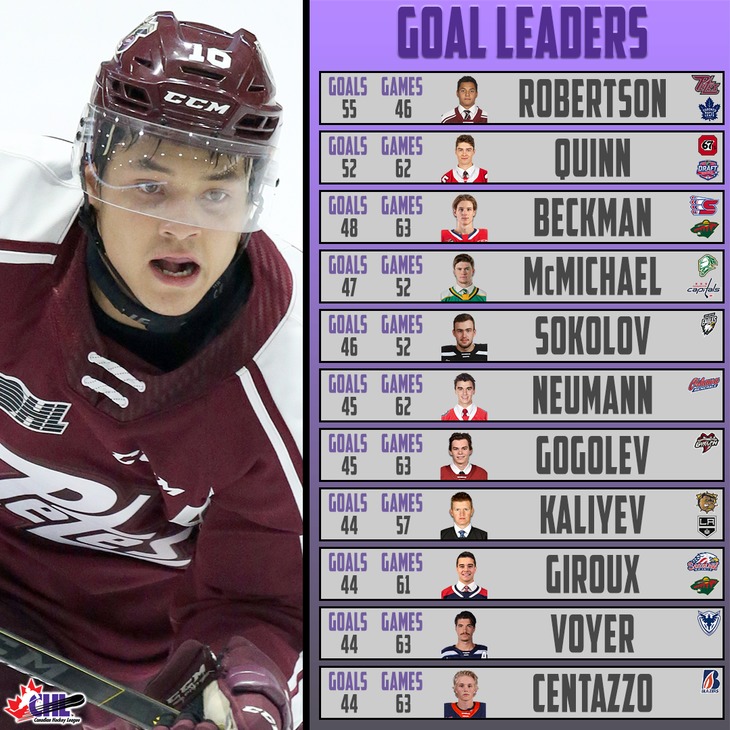 Ottawa 67’s centre Marco Rossi is once again at the top of the leaderboard in outpacing all CHL competition with 81 assists on the season.

Registering at least one helper in 47 appearances this season – including 21 games in which he recorded two-plus assists – Rossi is also the first 67’s skater to finish with at least 80 assists in a season since Corey Locke notched 88 helpers in 2002-03.

Across the circuit, other assist leaders included Lafreniere whose 77 helpers marked nine more than last season despite appearing in nine fewer contests. In the WHL, top honours went to Spokane Chiefs veteran centre Eli Zummack who led the league with 64 assists in as many games, good for a margin of two on Kamloops Blazers fourth-year forward Zane Franklin. Zummack finished fifth overall in assists behind NHL Draft prospect Cole Perfetti (74) of the Saginaw Spirit and Minnesota Wild prospect Alexander Khovanov (67) of the Moncton Wildcats. 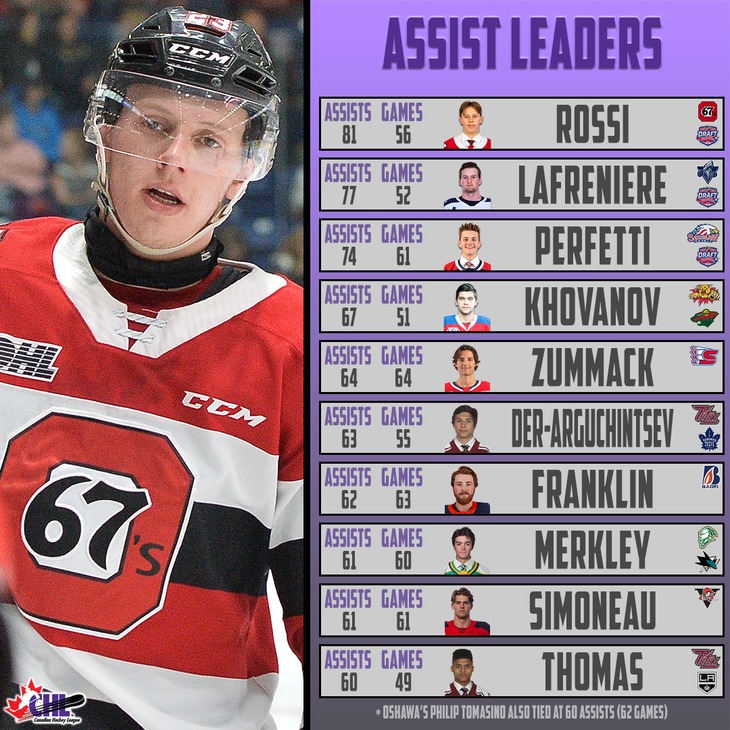