CHL Weekend Review: Saying goodbye while preparing for the next wave 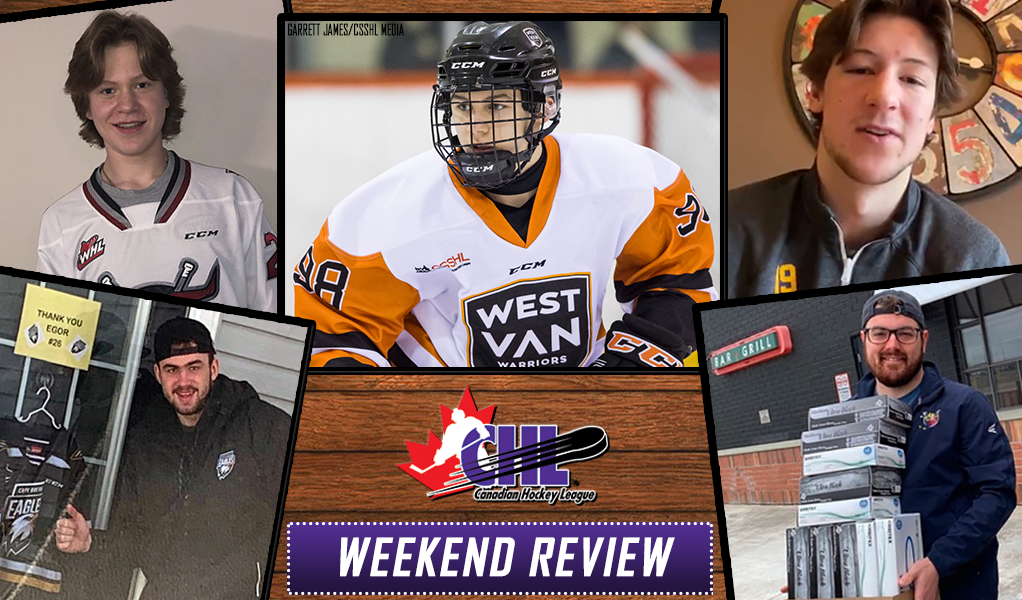 The Canadian Hockey League season has officially come to an end. As disappointing as that may be, our health and well being must take priority. And when it comes to that journey we’re all in this together.

With season’s end we say goodbye to our graduating class as they too bid their teams and fans farewell. We also continue to show strength and support within our community as isolation and social distancing practices continue. And we turn the page and get ready for the next wave of CHL talent.

Here’s a look at all of that and more:

A message from Dan MacKenzie

CHL President Dan MacKenzie put his thoughts about an emotional few weeks to paper with a message for the CHL family.

We’re in this together.

A message from President Dan MacKenzie to the #CHL family.

Goodbye from our Grads

When thinking of people to thank, I really don’t know where to start. I will be forever grateful for everyone who made the last 5 years a true blessing. Much love PEI… it’s been a pleasure.

@CBEHockey fans and those in Cape Breton, you deserve a winner. This hockey community is unmatched, I can feel the shared devastation between us. Being a fan first, then player, I’ll now join you on the fan side of the glass once again. It’s been an honour to be your captain 🦅 pic.twitter.com/7VoPtaglZp

We can’t wait for @ElijahRoberts98 to come back and say goodbye in person.

Until then, stay safe fam pic.twitter.com/tcV35tZ0XX

CHL players like all of us from coast-to-coast are social distancing and finding ourselves starved for hockey. Here’s a look at how some players like Vladislav Kotkov (Chicoutimi), Reid Valade (Kitchener), and Connor McClennon (Winnipeg) are staying active and on top of their skills from home.

Here are some at home dangles with @mcclennon_94 ! This is how he is keeping his hands sharp, show us how you are keeping your hands game ready! All you need is a bucket and an extra stick! #FeelTheFreeze pic.twitter.com/PsgfCxrfqL

Donations to make a difference

The Barrie Colts, Kitchener Rangers, and Owen Sound Attack are just three examples of our teams who have graciously donated Personal Protective Equipment such as gloves and masks to local healthcare facilities in need.

Call to the community:

RVH is in need of Personal Protective Equipment (PPE), such as gloves and masks.

Our Head Athletic Therapist, Jimmy, is donating our entire stock of latex-free gloves to the brave medical… https://t.co/J6JgsAYlFX

Big thank you to @OHLRangers for donating their unused PPE to us today! We wish we were listening to @farwell_WR & @_ChrisPope giving us the play-by-play from a playoff run, but we will have to catch it next year. Your donation will be put to good use! #COVID19 #InThisTogether pic.twitter.com/6LDEbEJtSQ

Honoured today on behalf of @AttackOHL to deliver a donation of nitrile gloves from our athletic therapy room to @GreyBruceHealth Thank you to all our frontline workers for all you’re doing to keep us safe. pic.twitter.com/ofkRZo06gU

Supplying a new kind of equipment

Bauer Hockey, one of the CHL’s Official Equipment Suppliers, is also making a difference as an industry leader doing everything they can to help others combat COVID-19. With a commitment to protecting health care facilities and first responders they’re repurposing their equipment facilities and shifting production to make single-use face shields and encouraging others to make better use of their own resources.

We are proud to be using our resources to protect medical workers on the front lines battling COVID-19, but WE NEED YOUR HELP.

We need other corporations to step up and convert their resources to build materials that will protect medical workers exposed to the virus. pic.twitter.com/vlsYWGRva7

Top QMJHL goal scorer Egor Sokolov is already a fan favourite having lit the lamp 46 times for the Cape Breton Eagles this season, however his popularity has undoubtedly grown in the time since hockey stopped. The Russian forward has been helping families in his adopted hometown by delivering grocery packages put together by a store owned by his billets.

Egor Sokolov led the QMJHL in goals this season, but he's scoring even bigger points with the citizens of his adopted hometown in Sydney, Nova Scotia, by delivering groceries to those unable to leave their homes. @mikemorrealeNHL has the story:https://t.co/HPHocibUYQ

The weekend’s calendar originally called for playoff hockey which would have meant lots of new pump up videos and highlight packages. Created content should still be shared and that’s exactly what the Oshawa Generals did by releasing their red hot promo video to social media truly igniting the fire.

Playoffs were to begin today.
Everything was going to be put on the line for the game, your teammates, and a championship.
Instead, the rinks may be empty for now, but we know we will always have hockey to come back to.

Sticking with the Generals and game day routines, the team’s legendary equipment manager Bryan Boyes posted a puck stack photo to social media in recognition for what would have been the commencement of playoffs.

The unfortunate global climate has cancelled more than just hockey with events such as annual award ceremonies also put on hold due to the pandemic. While many teams have moved forward with digital presentations and acknowledgments of their winners, the Saskatoon Blades did something different by having their fans and various other supporters announce the award recipients on video.

ICYMI: We invited some of our greatest fans and supporters to help unveil the individual awards for the past season!

The 2020 WHL U.S. Prospect Draft was held on Wednesday where WHL member clubs selected 44 players throughout the two-round process. Forward Gracyn Sawchyn of Shattuck-St. Mary’s Sabres 14U was chosen first overall by the Red Deer Rebels. In total, nine different states had players chosen led by 18 California-born players. Minnesota was next with 12 players selected while Texas was third with five. Complete results from the 2020 WHL U.S. Prospects Draft are available at whl.ca/draft.

BC Hockey announced on Tuesday the results of the review by Hockey Canada that Connor Bedard of North Vancouver, B.C., has been granted exceptional player status and therefore is eligible to play in the WHL next season as a 15-year-old. Bedard would become the seventh player to compete in the CHL with exceptional player status distinction, most recently following 2019-20 rookie Shane Wright of the Kingston Frontenacs. Bedard is eligible for the WHL Bantam Draft that takes place on April 22, 2020, where the Regina Pats hold the first overall pick.

To entertain fans while they are getting through the COVID-19 crisis, the QMJHL proudly launched its Official YouTube Channel. A new source for top plays, goals, and saves from past seasons, it will also contain interviews, features, and highlight packages as well as content from various league events. The channel will also stream historical games bringing fans some of the best moments over the past 50 years.

In order to support our fans during the COVID-19 crisis, we are proud to launch our official @YouTube channel! Entertain yourselves be reliving some of the #QMJHL's best moments.

The results of the annual OHL Coaches Poll recognizes the top three players in both the Eastern and Western Conference in 20 different skill categories based on the 2019-20 season. The first place Ottawa 67’s led the way with eight players spread out over an impressive 17 different categories with top scorer and NHL Draft prospect Marco Rossi included in six different fields.

Portland Winterhawks captain Johnny Ludvig has signed his entry-level contract with the Florida Panthers. The 19-year-old defenceman chosen in the third round of the 2019 NHL Draft recorded 62 points including 17 goals and 45 assists across 60 games this season.

Peterborough Petes goaltender Hunter Jones has also inked his entry-level contract following the completion of the 2019-20 campaign. The 19-year-old selected by the Minnesota Wild in the second round of the 2019 NHL Draft won 31 games over 49 appearances including four shutouts with a goals-against-average of 2.75 and a save percentage of .913.

The OHL family is saddened by the loss of former long-time referee, OHL Officiating Manager and 2009 Bill Long Award recipient Sam Sisco who has passed away at the age of 85. A native of Windsor, Ont. who taught at Herman Secondary School until 1989, Sisco served as an OHL officiating supervisor from 1989 until his retirement in 2008 before being honoured with the Bill Long Award for his outstanding contributions to the League.

The #OHL family is deeply saddened by the loss of former referee, OHL Officiating Manager and 2009 Bill Long Award recipient Sam Sisco who has passed away at the age of 85.

The Kitchener Rangers announced that the team has signed Mike McKenzie to a contract extension as the club’s General Manager through the 2024-25 season. McKenzie has been a part of the organization since 2012 when he was hired as an assistant coach by then-head coach, Steve Spott. He spent three seasons in that role before being promoted to assistant coach/assistant general manager ahead of the 2015-16 season. This season he also acted as the team’s interim head coach from November through the end of the 2019-20 season helping the Rangers climb from last place into Western Conference contention.

🆕 General Manager Mike McKenzie has signed a contract extension through the 2024-25 season.

Ryan Oulahen has been named the second head coach in North Bay Battalion history after agreeing to a three-year contract after previously serving as interim head coach since December 10 when Stan Butler, the only director of hockey operations and head coach the club had known since its inaugural 1998-99 season in Brampton, was reassigned. Oulahen played three seasons for the Battalion serving as the club’s captain in 2004-05. After an injury ended his playing career, he joined the Battalion as an assistant coach in 2010-11 in Brampton, a position he held until 2016-17, when he became head coach of the Flint Firebirds.

Made for green — The North Bay Battalion have named Ryan Oulahen the second Head Coach in franchise history.#BattleTogether pic.twitter.com/saIJuPdY8e

Winners of 24 weekly votes held over the course of the 2019-20 regular season have advanced to the #CHLShowdown Playoffs that will crown the year’s top play as chosen by the fans. In the first of eight Quarter-Final matchups D-Jay Jerome was victorious in the season’s closest vote to date. New matchups will launch every Tuesday afternoon at chlshowdown.ca.

Jerome Jukes and Jives for the win!

The first of eight Quarter-Final matchups in the #CHLShowdown Playoffs featured our closest result and two season high totals with @Jerome__15 for @TheWHL’s @WHLHurricanes advancing by just 60 votes.