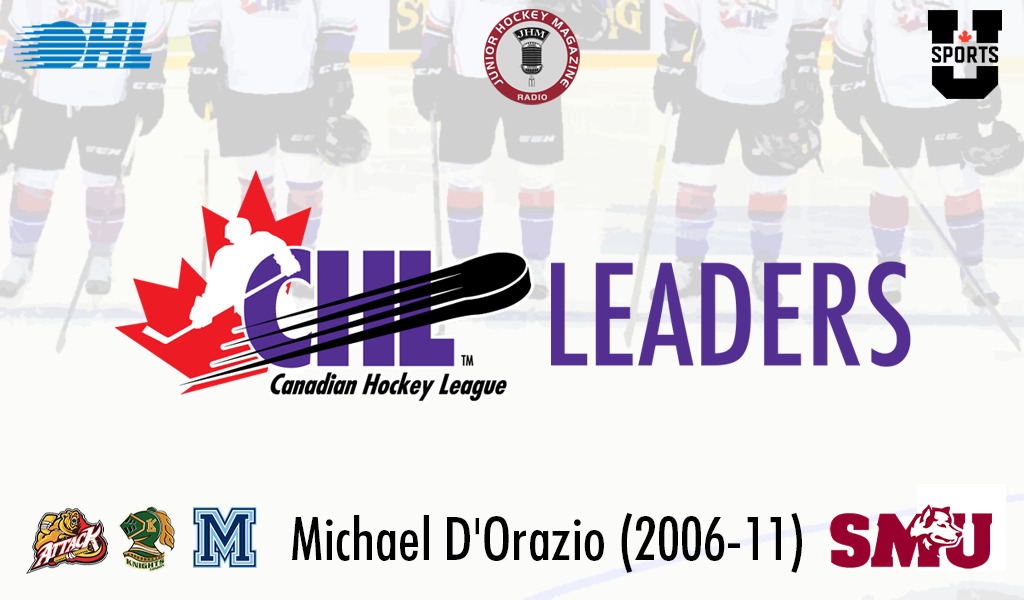 While his playing days have since passed, the many lessons Michael D’Orazio learned during his time in junior hockey remain with him today.

“It’s a lot. You practice every day, you have to study, you have to be on the ice, you have to be at the workouts, so time management is definitely one thing that I learned, plus punctuality and the importance of being on time,” D’Orazio told Junior Hockey Magazine as part of its CHL Leaders segment. “It also taught me to perform under pressure and I think that’s something that I really brought into my work life today.”

Following a five-year career in the Ontario Hockey League that spanned from 2006-11 and included stops with the Owen Sound Attack, London Knights, and Mississauga St. Michael’s Majors, D’Orazio turned his attention to the classroom in earning a post-secondary education from Saint Mary’s University.

“When I didn’t get drafted my NHL draft year, I started thinking about life after hockey,” D’Orazio detailed. “I knew the CHL offers a great scholarship program so I definitely weighed my options. I knew I could still play the game at a high level at university playing in U SPORTS and then get my degree, and I knew after that I could probably go play pro still so it was kind of the best of both worlds.

“It gave me up the opportunity to get my undergrad with zero debt after completing my degree. It really hits home when you’re actually there as there are a lot of expenses to going to university. I am just fortunate that I was blessed to get that opportunity that the CHL gave me and I am glad I used it. It definitely paid off in the long run.”

Obtaining a bachelor of arts degree in entrepreneurial and small business operations, while also suiting up for the varsity Huskies for five seasons, D’Orazio has since hung up the skates to focus on his new career as a cement sales representative with The Miller Group, a Toronto-based leader in the construction sector. Still, he isn’t entirely removed from the game as he today serves as an assistant coach in the Junior A ranks.

“I am keeping myself busy but I enjoy giving back to the game,” D’Orazio concluded. “The game did a lot for me and I try to portray that experience to the new generation coming up.”