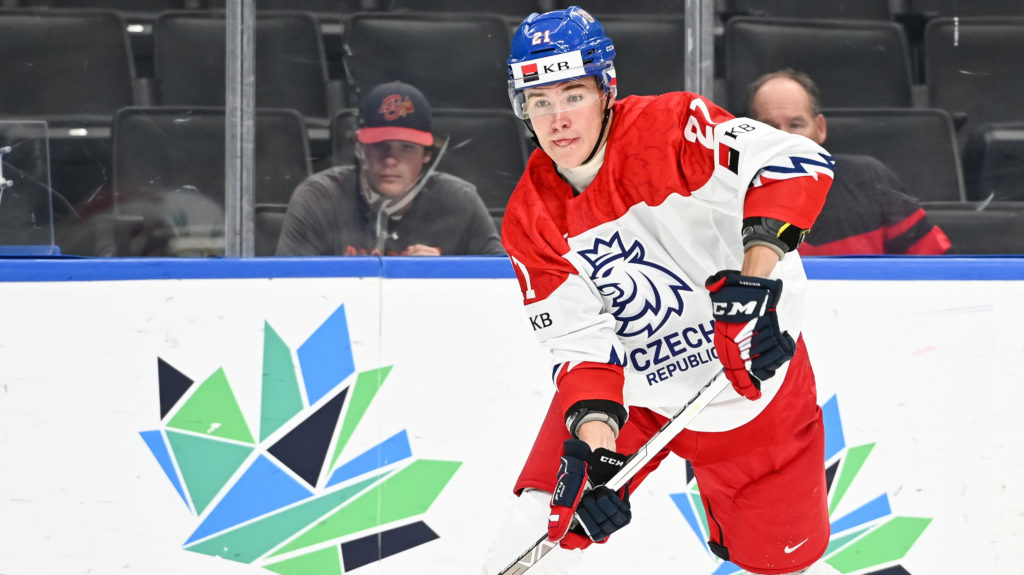 A trio of games will take place Sunday on the penultimate day of the round-robin at the 2022 World Juniors.

Canada is off today as the rest of Group A is in action while the day concludes with a mammoth contest between Sweden and USA.

Finland’s (2-0-0) spot in the quarterfinals is already secured but they will have an eye on tomorrow’s clash with Canada that will decide top spot in Group A.

Slovakia’s (1-2-0) spot in the quarters is not yet confirmed. They sit foruth in Group A on two points, with Latvia a point behind. The Slovaks have to match or better Latvia’s result today to ensure a spot in the final eight. Chicoutimi’s Matej Kaslik continues to lead Slovakia in goals and points with three.

Czechia (1-1-1) are likely locked into third place in Group A. If Finland wins the day’s first game, Czechia can’t move any higher than third. The Czechs continue to be led by captain Jan Mysak (HAM) who has three goals and one assist in the tournament while Everett’s Michal Gut has two assists.

They will face a Latvian (0-2-1) side that must win. They sit bottom of Group A with one point, a spot behind Slovakia who are in possession of the final quarterfinal berth. Bogdans Hodass (MH) has one goal and one assist while Niks Fenenko (BC) has a goal.

The top two teams in Group B meet in an enticing tie to conclude Day 6 with first place on the line. The USA (3-0-0) have cruised thus far having outscored opponents 19-2. Sasha Pastujov (GUE) has one goal and three assists in the tournament, the only CHL skater on the USA squad.

Sweden (2-0-0) can secure first place with a win tonight and by collecting at least a point against Germany Monday. Fabian Lysell (VAN) has a goal and two helpers while Oskar Olausson (OSH) has three assists in the competition.

Mysak, who helped lead Hamilton to an OHL title and a spot in the final of the Memorial Cup last season, has had another standout tournament.

The Czechia captain, playing in his third World Juniors, has the aforementioned three goals and assist to lead his side in scoring. He also has registered 15 shots on goal, the fourth most in the tournament.

The USA collected its third straight win after a 7-0 victory over Austria. Pastujov got his name on the scoresheet for the first time while Saginaw’s Andrew Oke saw his first action of the tournament as he stopped all 11 shots he faced as he played 40 minutes and collected the win in goal.

Czechia’s lone goal came from Martin Rysavy (MJ) who scored the tournament’s first shorthanded goal as he gave his side a 1-0 lead in the first period. The Warriors winger has two goals in three games thus far.

Gatineau’s Haakon Hanelt scored the game-winner for Germany as they beat Switzerland 3-2. Spokane’s Yannick Proske collected two assists in the victory as the Germans secured a spot in the quarterfinals.