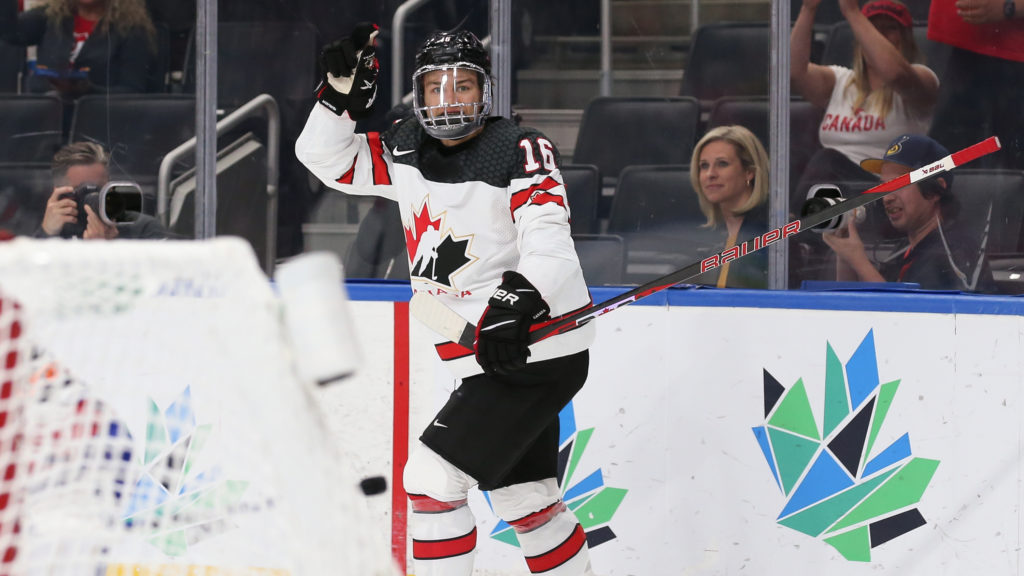 Canada returns to action today on Day 5 of the 2022 World Juniors.

The tournament has moved into crunch time as teams not only try to secure their spot in the quarterfinals, but the best seed possible too.

The USA (2-0-0) have started perfectly after expected, but convincing wins, over Germany and Switzerland. Their 12 goals this tournament are the second most as Guelph forward Sasha Pastujov has recorded two assists.

Austria (0-2-0) are winless after defeats to Germany and Sweden. However, their eyes will solely be focused on Monday’s contest against Switzerland where the winner will likely secure the fourth and final quarterfinal berth in Group B.

After an uninspiring 5-2 win over Latvia in their tournament opener, Canada steamrolled Slovakia 11-1 Thursday. Mason McTavish (HAM) led the charge with a four-goal game – the seventh such effort in Canadian World Juniors history – while nine players tallied multi-point games.

Canada’s 16 goals thus far leads the tournament while McTavish’s eight points are the most in the competition with his next closest competitor three points behind.

Czechia (1-0-1) are third in Group A after a regulation win over Slovakia and a shootout defeat to Finland. The Czechs continue to be inspired by captain Jan Mysak (HAM) who has three goals and one assist thus far. His three goals are tied for the second most in the tournament.

Germany (1-0-1) haven’t played since Wednesday but with their win over Austria that night, a spot in the quarterfinals is all but confirmed. The Germans have four CHL players on their roster but none have yet to record a point.

A win for Switzerland (0-2-0) would be huge for their quarterfinal aspirations and would alleviate some pressure ahead of Monday’s game against Austria. Halifax’s Attilio Biasca has one goal and one assist through two games.

While it’s easy to return to McTavish, who also had two assists Thursday, Joshua Roy (SHE) turned in a four-point game against Slovakia.

He buried his first goal of the tournament to make it 10-1 while he also notched three assists. Roy’s 119 points led the QMJHL last season while his 51 goals were tied for the fourth most.

Roy has five points at the World Juniors, tied for the second most.

Sweden cruised past Austria 6-0 as Fabian Lysell (VAN) scored his first goal of the tournament and added an assist. Oskar Olausson (OSH) had a game-high three points as he recorded a trio of helpers.

A Fabian Lysell 🚀with no room at all 🤯 puts 🇸🇪 up 5-0#WorldJuniors | @WHLGiants | @NHLBruins pic.twitter.com/UUGvqdyNyE

Slovakia grabbed a much needed win, albeit in a shootout, as they beat Latvia 3-2. Chicoutimi’s Majek Kaslik had the shootout winner while Jakub Demek (EDM) had one assist.

Baie-Comeau’s Niks Fenenko, the 2020 first overall pick in the CHL Import Draft, scored his first goal of the tournament for Latvia.