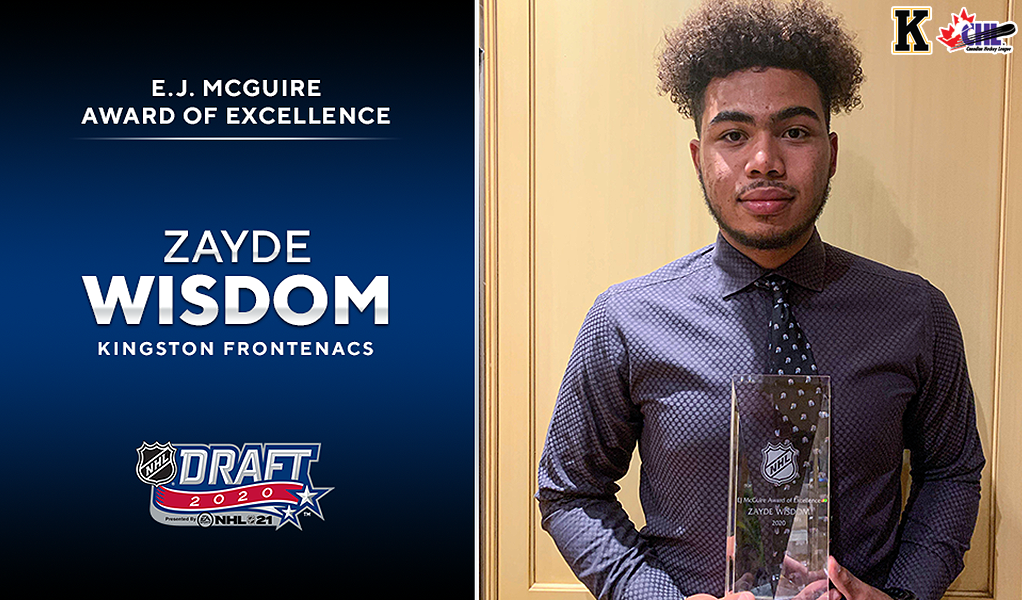 Zayde Wisdom, the 54th-ranked North American skater for the 2020 NHL Draft, has been presented with the E.J. McGuire Award of Excellence, the National Hockey League announced.

First handed out in 2015, the E.J. McGuire Award of Excellence is presented annually by the NHL to a candidate who best exemplifies commitment to excellence through strength of character, competitiveness, and athleticism.

In the 2019-20 season, the Toronto native ranked second on the Kingston Frontenacs in goals (29), assists (30) and points (59) in 62 games, marking a huge leap in production over his rookie campaign with a 26-goal and 49-point improvement.

“Zayde Wisdom displays all the qualities that the E.J. McGuire Award represents and truly merits this recognition,” said Dan Marr, Director of NHL Central Scouting. “His commitment and drive to succeed throughout his journey as an aspiring prospect exemplifies all that is good in our game, from the grassroots level and hockey community to the professional mentorship he’s receiving today, all which serve to highlight Zayde as an inspiration for future players.”

After many years of coaching and scouting at various levels of hockey, McGuire joined the NHL’s Central Scouting Bureau in 2002 and assumed day-to-day responsibility for the department in 2005. McGuire spearheaded an operation that provided scouting and evaluation of draft-eligible players to NHL Member Clubs. He led a team of eight full-time and 15 part-time scouts throughout North America. Just as he brought innovation to the coaching profession throughout his career, McGuire was responsible for several advancements in the area of scouting during his nine years at the NHL, including the development of a new scouting technology system that brought the “art” of scouting to a whole new level. He was instrumental in raising both the effectiveness and profile of the NHL’s annual scouting combine. McGuire lost his short but courageous battle with cancer in April 2011.