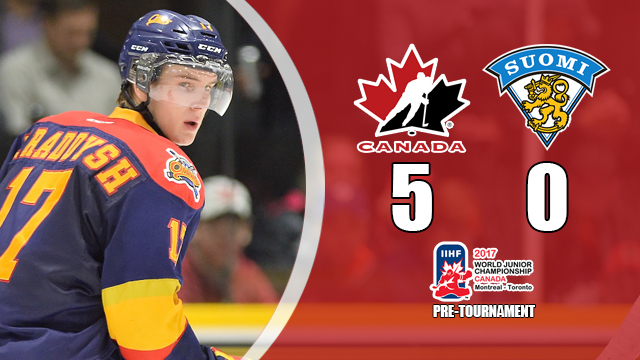 Mathew Barzal (Seattle Thunderbirds) also found the back of the net and added an assist while big winger Julien Gauthier (Val-d’Or Foreurs) recorded a pair of helpers.

“Overall, we’re happy with tonight’s game,” Team Canada head coach Dominique Ducharme (Drummondville Voltigeurs) said post-game. “We’re always looking to get better – it’s something that’s ingrained in us. From day to day, we want to elevate our game. There are certainly some positive things that we did tonight, and some things that need improvement.”

Canada’s next pre-tournament action comes against the Czech Republic at the Canadian Tire Centre in Ottawa on Wednesday at 7:00pm.