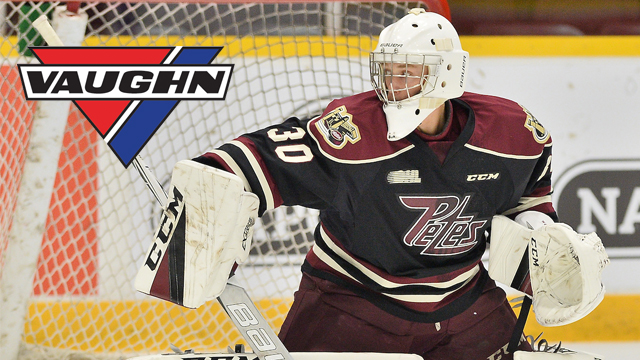 Toronto, ON – The Canadian Hockey League today announced that Edmonton Oilers prospect Dylan Wells of the Peterborough Petes is the Vaughn CHL Goaltender of the Week for the first half week ending December 18 posting a 3-0-0-0 record with a goals-against-average of 1.95 and save percentage of .945.

Wells turned aside 103 shots in three games last week helping the Petes extend their winning-streak to eight-straight heading into the league’s holiday break.  On Thursday night he made 30 saves before a national audience on Sportsnet earning second star honours in a 3-1 victory over the London Knights.  He followed that performance with a 40-save effort Friday to earn first star of a 4-3 overtime win against the Kingston Frontenacs, then closed out the first half Sunday with 33 saves to earn second star recognition in a 5-2 win over the North Bay Battalion.

An 18-year-old from St. Catharines, ON, Wells is playing in his third career season with the Petes who chose him in the second round of the 2014 OHL Priority Selection.  Wells ranks second in the OHL with 903 saves while carrying a record of 16-8-1-2 with a goals-against-average of 2.97 and the league’s fifth best save percentage at .920.  He was selected by the Oilers in the fifth round of the 2016 NHL Draft.