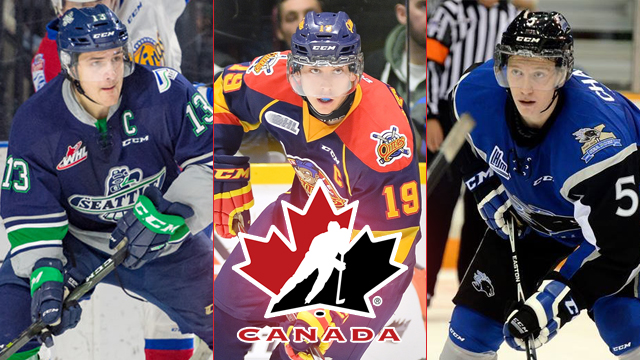 The 22-player squad was named at the completion of a five-day selection camp in Boisbriand, Que., last week. Of its five returning players, Strome will wear the ‘C’ with Barzal and Chabot serving as alternate captains – a recognition of their on- and off-ice leadership qualities the coaching staff has recognized and the team as a whole is tapping into.

“We have eight players on this team who are captains of their club teams, and numerous other associate captains, so there is an abundance of leadership,” said Dominique Ducharme, head coach of Canada’s National Junior Team. “Dylan, Mat and Thomas have been through this tournament before, and we have confidence in their ability to lead this team on and off the ice.”

For Strome, whose international experience also includes a gold medal at the 2014 Ivan Hlinka Memorial Cup and a place on the Ontario team at the 2014 World Under-17 Hockey Challenge where he was named a tournament all-star, the experience brings him back to his minor hockey roots; the Mississauga native and Arizona Coyotes’ 2015 draft pick grew up playing in the GTA before being drafted by the OHL’s Erie Otters of the Canadian Hockey League. Canada plays all of its preliminary-round games in Toronto, while gold will be won in Montreal.

Both Barzal, selected by the New York Islanders in the first round of the 2015 NHL Draft, and Chabot, who will be on familiar ice in pre-tournament action in Ottawa who selected him 18thoverall in the 2015 draft, were members of the Canadian team that captured bronze at the 2015 IIHF U18 World Championship, and Barzal also won gold at the Ivan Hlinka Memorial Cup in 2014.

The puck will officially drop on the 2017 IIHF World Junior Championship, a Canadian holiday tradition, on Dec. 26 in Montreal and Toronto. In its opening game, Canada will face Russia at the Air Canada Centre in Toronto at 8 p.m. ET.

Canada plays three pre-tournament games Dec. 19 in Montreal against Finland, Dec. 21 in Ottawa against the Czech Republic, and Dec. 23 in Toronto against Switzerland. Extensive coverage of the 2017 IIHF World Junior Championship is planned by TSN and RDS, the official broadcasters of Hockey Canada, including Canada’s three pre-tournament games; check local listings for details.

For more information on Hockey Canada, Canada’s National Junior Team, and the 2017 IIHF World Junior Championship, visitHockeyCanada.ca or follow along via social media on Facebook and Twitter, as well as #WorldJuniors.