Trio of Championships up for grabs in CHL Playoffs 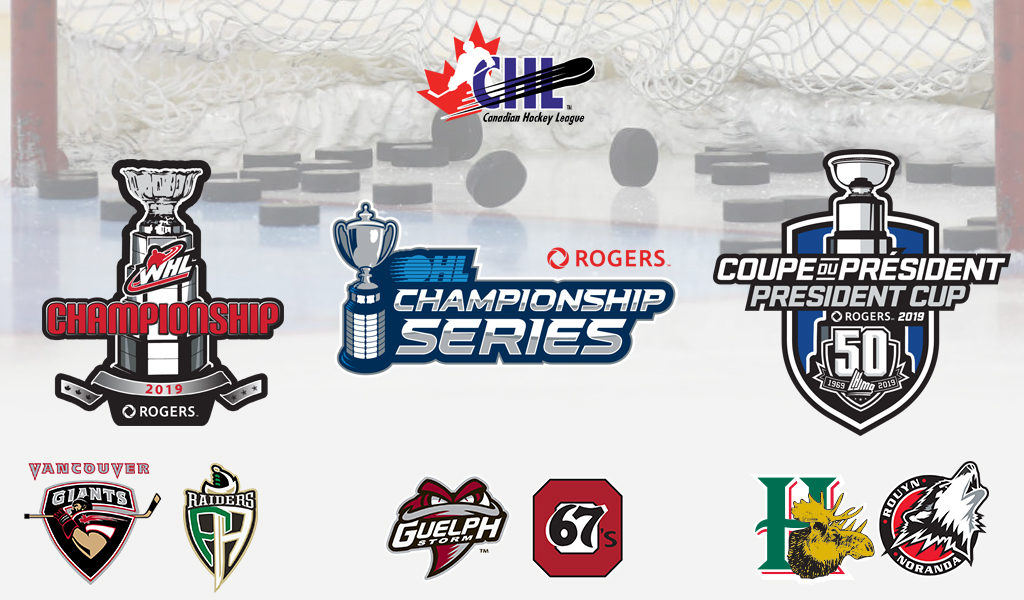 Six teams remain in the Canadian Hockey League playoffs, with the puck set to drop Thursday:

Two of the most intriguing storylines will meet in the Rogers OHL Championship Series in the 67’s and Storm.

The 67’s enter the final round riding a perfect 12-0 playoff record, becoming just the second team in league history to post such a start. In search of its first OHL championship since 2001, Ottawa has received support throughout its lineup, beginning in the forward ranks, where Dallas Stars prospect Tye Felhaber has come alive in the latter rounds, collecting 17 points in his last eight outings. On the back end, the 67’s are led by a pair of Arizona Coyotes prospects in Noel Hoefenmayer and Kevin Bahl, while between the pipes trade acquisition and Vancouver Canucks draft pick Michael DiPietro is getting it done as he is a perfect 12-0 through the postseason with a 2.26 goals-against average and .913 save percentage.

Standing between the team’s hopes of qualifying for the 2019 Memorial Cup presented by Kia is the Western Conference’s Guelph Storm, who after eliminating the Kitchener Rangers in the quarter-final pieced together back-to-back series comebacks over the top-seeded London Knights then the Saginaw Spirit to advance to the OHL Final for the first time since 2014. The Storm are led by Montreal Canadiens prospect Nick Suzuki, whose 31 points – counting four game-winning goals – ranks first in OHL playoff scoring, while the team is also getting plenty of secondary offense from a handful of players, including Philadelphia Flyers draft-pick Isaac Ratcliffe and Chicago Blackhawks up-and-comer MacKenzie Entwistle.

We just announced the 2019 President Cup Final Schedule between the @HuskiesRn and the @HFXMooseheads. #QPlayoffs 👇

Two conference winners will battle it out to claim the President’s Cup, with the first-place Huskies looking to win their second championship in the past four seasons, while the Mooseheads hope to capture their first since 2013.

After a rocky start to the postseason in which the Huskies dropped two of four contests to the 16th-place Shawinigan Cataractes, the team has found its footing, piecing together 10-straight victories, counting sweeps of the Victoriaville Tigres and Rimouski Oceanic in the latter rounds of the postseason. The streak resembles the team’s play from earlier this year when it won 25 games in a row to tie a CHL record. Up front, the Huskies are led by Montreal Canadiens signee Joel Teasdale as well as overager Peter Abbandonato, who put up 111 points in the regular season to take home the Jean Beliveau Trophy. Abbandonato could prove to be the ‘X’ factor versus the Mooseheads as he is hopeful to return after missing the previous round due to a bout of mononucleosis.

While the Huskies and Mooseheads will meet in round-robin action at the 2019 Memorial Cup presented by Kia, the President’s Cup Final will serve as a tune up for the big tournament. The Huskies have never won the CHL title, but the Mooseheads did six seasons ago, and hope to do so again this year, led by draft-eligible right-wing Raphael Lavoie, who has tallied an astounding 27 points through 17 playoff appearances, including a league-best 17 goals.

It's going to be a good one! The @PARaidersHockey & @WHLGiants will meet in the 2019 @Rogers #WHLChampionship Series!

Two conference champions collide in the Ed Chynoweth Cup Final, with the Giants looking to win it all for the first time since 2006, while the league-leading Raiders seek their first title in 34 years.

The two sides enter the final round with little familiarity for their opponent as they faced off just once during the regular season, a contest that saw the Giants come away with a 3-1 victory on home ice thanks to a two-goal effort from right-wing and leading scorer Davis Koch. The native of nearby White Rock, B.C., has kept up his scoring touch in the postseason as his 17 points trail only teammate and draft-eligible defenceman Bowen Byram, who has put up seven goals and 11 assists to sit atop the league lead in scoring and climb to second among North American skaters in Central Scouting’s final rankings.

Rounding out the Giants is a formidable tandem between the pipes in draft-eligible goaltender Trent Miner and Arizona Coyotes prospect David Tendeck, who have continued to share duties throughout the postseason. The two will face a Raiders squad led by top prospect Brett Leason, who has drawn the attention of talent evaluators this season after going unselected in the past two drafts. Meanwhile, as strong as the Raiders are offensively, the team is just as stringent in its own end, led by netminder and Toronto Maple Leafs draft pick Ian Scott, whose eight regular-season shutouts ranked first in the WHL.