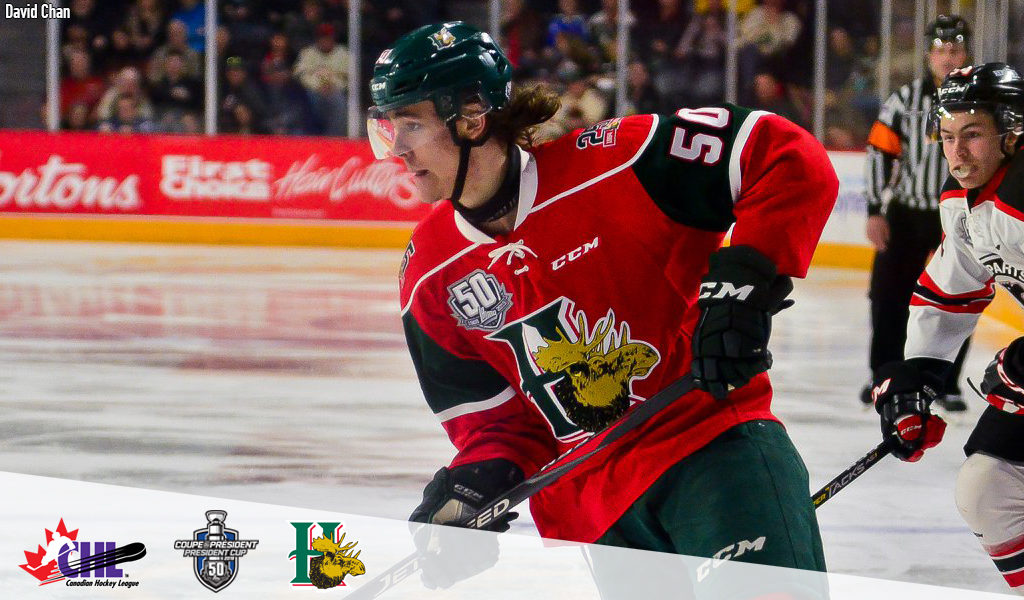 After a modest regular season in which he posted 32 goals and 41 assists in 62 games – a 10-point increase from the year prior – Halifax Mooseheads right-wing Raphael Lavoie has taken the 2019 QMJHL postseason by storm, already with 17 goals and 27 points to lead the league in both categories.

Lavoie’s dominant play, particularly his newfound ability to raise his game when it matters most – a rare gift owned by few players – hasn’t gone unnoticed either, as the product of Chambly, Que., ranks 20th among North American skaters ahead of the June draft.

In all, Lavoie could soon become the latest Mooseheads graduate to be selected in the first round of the NHL draft, the next in line for a franchise that has consistently churned out top-level talent like Nathan MacKinnon (Colorado Avalanche), Jonathan Drouin (Montreal Canadiens), Nikolaj Ehlers (Winnipeg Jets), and Filip Zadina (Detroit Red Wings), among others.

Lavoie will get his latest opportunity to impress on the big stage as the Mooseheads look to hoist the President’s Cup for the first time since 2013. That series starts Thursday, when Halifax will open against the first-place Rouyn-Noranda Huskies in what is ultimately a tune up ahead of the 2019 Memorial Cup presented by Kia.

While the hosting Mooseheads’ spot in the CHL championship is guaranteed, the squad undoubtedly wants to enter the title round on a winning note, as Lavoie’s teammates in Samuel Asselin as well as captain Antoine Monard did so last year when they won it all with the Acadie-Bathurst Titan.

Best of all for the Mooseheads is that Lavoie is heating up at the right time, as evidenced by his play earlier this month when he put up six goals and three assists for nine points over four games versus the Quebec Remparts and Victoriaville Tigres, earning him CHL Player of the Week honours. Lavoie and the Mooseheads then went on to defeat the second-place Drummondville Voltigeurs in six games in Round 3 action.

In all, after missing last year’s draft cut-off date by 10 days – Lavoie is a late September birthday – the budding forward has capitalized on an opportunity to further refine his game with more time in the junior ranks, with his efforts certainly catching the attention of team management.

“He’s got an NHL shot. He’s a scoring threat,” Mooseheads general manager Cam Russell told Philip Croucher of the Star Halifax. “This is when the games really matter, playoff hockey, and these are the players that step up and lead your team.”

The Mooseheads advanced to the QMJHL Final and will compete against the Rouyn-Noranda Huskies for the President’s Cup before hosting the 2019 Memorial Cup presented by Kia. The QMJHL Final begins Thursday in Rouyn-Noranda. For complete QMJHL playoff preview coverage, click here.