The Week That Was – News & Notes from around the CHL 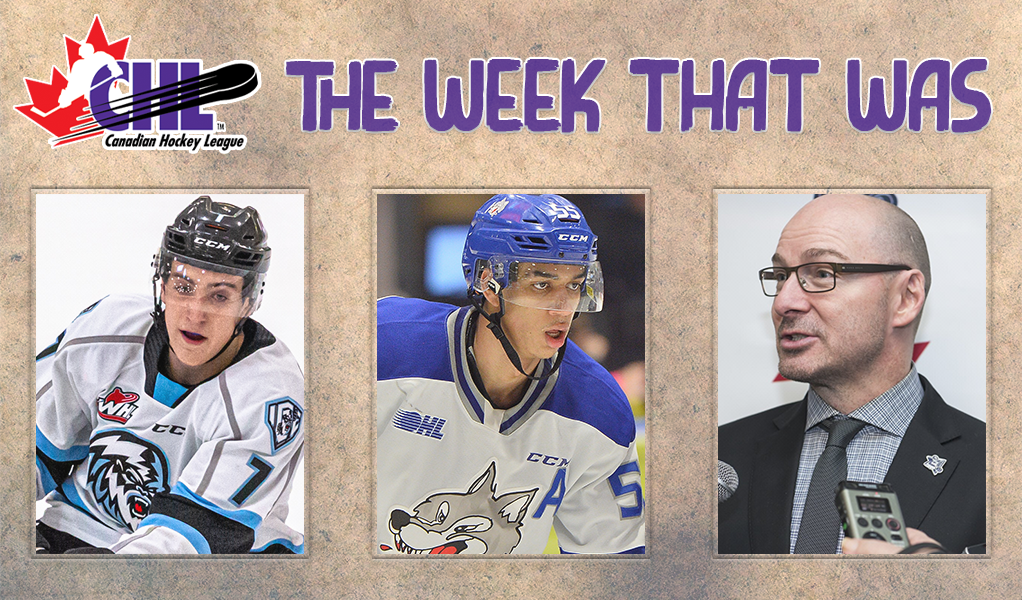 Selected second overall in the 2020 NHL Draft by the Los Angeles Kings, Sudbury Wolves centre Quinton Byfield has yet to head to the Golden State, but that hasn’t stopped some of Hollywood’s biggest names from extending warm welcomes.

Welcome to LA Quinton Byfield! Congratulations on being drafted by the Kings as the highest-selected Black hockey player in NHL history! @byfield55

“I couldn’t even believe it,” Byfield told Kings reporter Mike Commito. “I wouldn’t even think they’d know who I am, let alone go on social media and welcome (me) to L.A., that is something special. Those guys are icons in their own ways, so seeing those messages from those guys really makes you feel welcome and really want to get down there and start playing.”

History made in the #NHLDraft:

Dubbed “(a) blend of elements of culture and hockey, providing uncharted commentary and perspectives on the state of the game, defining moments in history, and the future evolution of the sport”, Soul on Ice’s latest episode saw Byfield share the mic with Kingston Frontenacs forward Zayde Wisdom, a 2020 fourth-round selection of the Philadelphia Flyers and this year’s recipient of the E.J. McGuire Award of Excellence which recognizes the candidate who best exemplifies a commitment to excellence through character, competitiveness, and athleticism.

Like many clubs across the CHL, the Gatineau Olympiques will soon have a boost to their lineup with the return of outside talent. For the Olympiques, among those players is Russian defenceman Evgenii Kashnikov, one of many non-Canadian players who hope to return to their teams following a quarantine period.

Chosen 12th overall in the 2019 CHL Import Draft, Kashnikov made 59 appearances with Gatineau as a rookie in 2019-20. The coming campaign now brings added opportunity for Kashnikov to impress as he was one of 113 CHL talents recognized as Players to Watch by Central Scouting ahead of the 2021 NHL Draft.

“I saw the rating they gave me, but hockey is a team game and the results of the team are most important for me,” Kashnikov said. “As for the rating, it is a big step for me and in order to justify it, I will continue to work very hard and improve all the components of my game.”

There is nothing like a little sibling rivalry to help Carson Lambos ready for his draft year.

A projected early selection in the coming NHL Draft, the Winnipeg ICE blue-liner who was chosen second overall in the 2018 WHL Bantam Draft is preparing for a busy season as a first-year draft eligible.

Luckily for @jlambos4, a large part of his motivation to train and prepare for the upcoming WHL season lives in the same household and plays for the provincial rival Winnipeg Ice.

The younger brother of 19-year-old rearguard Jonny Lambos of the Manitoba rival Brandon Wheat Kings, the on-ice battle between the siblings has helped create healthy competition in offseason training sessions as the two help each other prepare for the new season.

“At the start I had to work out at home and me and Carson would go to soccer fields and do workouts on the track or in the field,” the elder Lambos told Perry Bergson of the Brandon Sun. “Eventually when things started opening up again we went back to training in the gym and then skating … I think it helped both of us to stay motivated to have each other pushing one another to work hard.”

One for the record books

The past week also saw a major milestone come in Rimouski where general manager and head coach Serge Beausoleil was behind the bench for his 600th career appearance. In doing so, he became just the sixth QMJHL head coach to reach the accomplishment with a single franchise.

“Being at the head of this organization is not only a privilege, it is an extraordinary life experience,” Beausoleil told Rene Alary of Journal Le Soir. “I work with amazing guys and I have bosses who believe in what we do. We know that this year we will be taking trails that are a little more winding. No trouble, we believe in what we do.”

Beausoleil was appointed in 2011 by then Oceanic general manager Philippe Boucher, who is now at the helm of the Drummondville Voltigeurs.

Stepping behind the bench

The Saskatoon Blades will have a refreshed look behind the bench next season with the team’s hiring of WHL alumni Tyler Dietrich who joins the Blades as an assistant coach.

Dietrich, 36, heads to Saskatoon after a four-year run as video coach with Hockey Canada that included a gold-medal win at the 2020 World Juniors. A former forward, Dietrich skated five seasons and 133 career contests in the WHL from 2000-05 as part of the Moose Jaw Warriors, Medicine Hat Tigers, and Everett Silvertips.

“I’m really excited about the opportunity ahead,” Dietrich said in a statement. “Knowing the direction that general manager Colin Priestner has the Blades going, and the leadership that Mitch Love provides as the head coach, I anticipate a great season ahead.”

The appointment is a reunion for Dietrich and Love as the former on-ice teammates helped the Silvertips capture the WHL Western Conference Championship in 2004.

Off the ice, CHL clubs continue their admirable charitable efforts within their communities, including the Windsor Spitfires who will take part in the Grow On Windsor Campaign. The two-fold effort helps raise awareness for men’s cancer in addition to raising funds for medical equipment related to cancer treatment.

In addition to fundraising, participants are asked to give up grooming for November to show their support. Among those joining the effort is Spitfires co-owner Stephen Savage, a throat cancer survivor.

“Cancer has had quite an impact on the Ontario Hockey League, thinking recently of Dale Hawerchuk of others,” Savage told the OHL. “When we realize the impact of cancer, to bring that to the forefront of players’ minds is an important aspect of the game and what we at the OHL can deliver to our players, because it’s about player development in terms of their hockey careers, but this is a side of their development that I think is important.”

Beginning in 2015, the Grow On Campaign has raised more than $1 million, including a record-breaking $340,000 last year.

Cancer awareness efforts are also on the go in the QMJHL with the Olympiques’ Draw the Beard contest, with veteran defenceman Kyle Havlena leading the charge.

Throughout the month, Havlena will select one drawing each week submitted by an Olympiques fan and trim his beard to match the illustration. Havlena’s participation comes as part of Movember, an annual campaign that aims to raise awareness of men’s health issues.

This week, the OHL and the greater hockey community mourned the death of Soo Greyhounds legend Angelo Bumbacco, an iconic figure in Northern Ontario. Bumbacco was 88.

An original founder of the Greyhounds, Bumbacco helped guide the club’s entrance into the then Ontario Hockey Association. Serving as general manager until 1989, Bumbacco’s tenure counted a J. Ross Robertson Cup championship in 1985 as well as the development of several future NHL stars like Wayne Gretzky.

So sorry to hear of the passing of Angelo Bumbacco. He drafted me at 16 and he’s been a friend and mentor ever since.

My thoughts are with his family and the entire Soo Greyhound community. https://t.co/IGYZmqBvU0

“He was an indispensable part of the rich history of the Soo Greyhounds,” Greyhounds president Tim Lukenda told Peter Ruicci of The Sault Star. “He was first class all the way. We will miss him greatly overseeing his boys at the Greyhound games.”

Later serving as an amateur scout with the Tampa Bay Lightning, Bumbacco’s trophy case also includes a Stanley Cup win with the Lightning in 2004.