Skinner shines but Bulldogs prove too much for Broncos 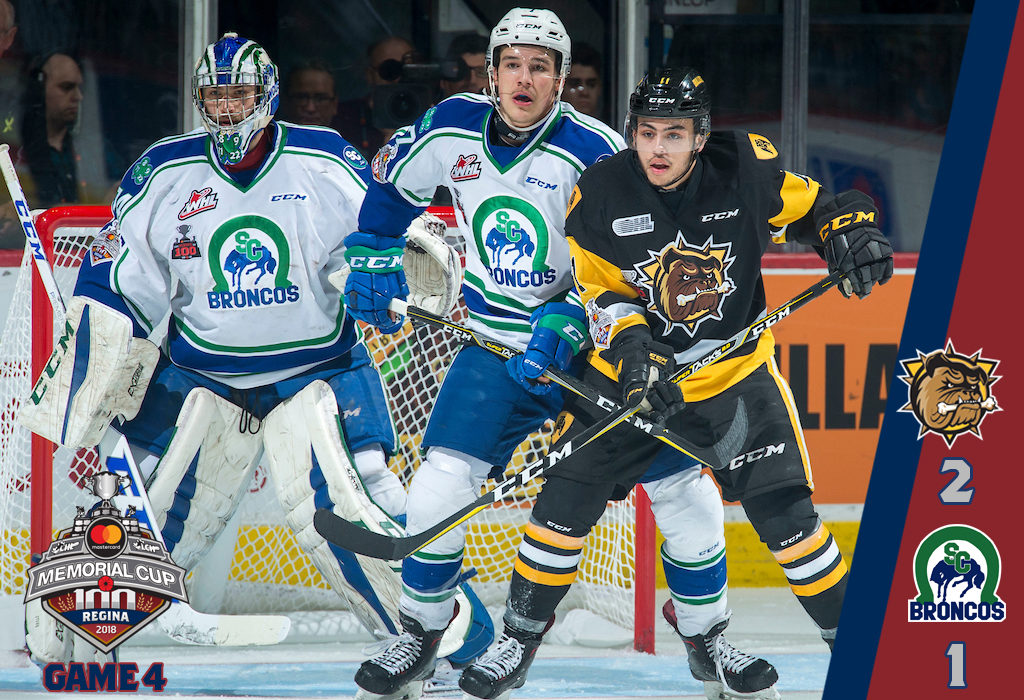 Stuart Skinner was sensational, but his 54 saves weren’t enough to get the Swift Current Broncos the victory they sorely needed.

New Jersey Devils prospect Marian Studenic struck for the game winner with 2:01 remaining in the third period to give the Hamilton Bulldogs a much-deserved 2-1 victory as they outshot the Broncos 56-22 and improved to 1-1.

Skinner gave the Broncos a chance to win, but in the end the Bulldogs proved to be too much as all four lines applied pressure on the forecheck and generated scoring chances in a variety of different forms.

The @SCBroncos got 54-save performance from @ssskipy_74 but the @BulldogsOHL prevailed 2-1 on a late game winner from @Studa_19 to improve to 1-1 at the #MCMemorialCup. #MMC100

Studenic stepped up as the hero, doing so in front of his parents who arrived from Slovakia in time to see the game.

“It’s good timing,” he said with a smile. “It’s nice to see them. It’s been almost five months since I saw them the last time so I’m happy they can see this.

“Our game was good. We were winning 50/50 battles, working hard and playing like a team.”

Coach John Gruden was equally impressed with his club’s effort, noting he saw an improvement from Friday’s 3-2 loss to the Regina Pats right from the drop of the puck.

“I liked our teams play right from the first period,” he said. “When they show up in the first, their style of play isn’t based on the score. They continued to do it in the second, kept it up in the third and in the end we found ourselves winning a hockey game that I thought we deservedly should have won.”

The win is the Bulldogs first-ever at the Mastercard Memorial Cup and the first for the city of Hamilton since the Hamilton Fincups defeated the New Westminster Bruins by a score of 5-2 on May 16, 1976 at the Montreal Forum to hoist the Memorial Cup.

The Bulldogs came out and controlled the pace of play in the first, taking a 1-0 lead on a goal from Arizona Coyotes prospect MacKenzie Entwistle. Overage forward Ryan Moore blazed down the wing, sending a low shot on the pad of Skinner that inspired a rebound for Entwistle coming down the middle with 14:11 on the first period clock.

Skinner came up big numerous times in the first, turning aside 21 shots as the Broncos were outdone 22-4 on the shot clock.

Swift Current came out with more jam in the second, weathering an early storm as Skinner robbed Isaac Nurse on a breakaway before Colby Sissons fired things up on the power play, wristing a point shot past a screened Kaden Fulcher at 9:26.

The Broncos turned up the pressure late in the second, forcing Fulcher into a point blank glove save off Glenn Gawdin to keep the score knotted at one after 40 minutes.

The Bulldogs regained their grip on the game early in the third period, barraging Skinner’s crease with a steady stream of shots as the Edmonton Oilers prospect stood tall. He had a little luck too, getting a pair of goalposts on two different Nicolas Mattinen point shots in the same shift.

Star forwards Robert Thomas and Glenn Gawdin traded grade-A chances inside the final seven minutes of regulation before the Bulldogs finally broke through, with Studenic getting open for a one-timer on a pass from defenceman Ben Gleason entering the zone.

“I couldn’t believe I scored,” said Studenic, who overcame a fever last night to score the game winner. “Our video coach (Dan Russell) told me this was going to be a big game for me and he ended up being right,” he laughed. “I thought we deserved to win the game so it feels pretty good.”

Swift Current’s Skinner earned first star honours for his efforts in the loss. His 54 saves are the most in a game since Belleville’s Mike Murphy turned aside the same amount during the 2008 Mastercard Memorial Cup in Kitchener.

“Stuart was outstanding, we didn’t have a chance to even be in the game if it wasn’t for him,” said Broncos head coach Manny Viveiros. “He just kept us in the whole game. We had some looks at the end there, but without Stu tonight the score could have gotten out of hand really quick.”

Back on their heels with an 0-2 record, the Broncos get a day off on Tuesday to rest up for the rival Regina Pats on Wednesday while the Bulldogs (1-1) get back to work against the undefeated Acadie-Bathurst Titan (2-0) on Tuesday.

Tomorrow’s Hamilton/Acadie-Bathurst matchup will go a long way toward determining who will advance to Sunday’s Mastercard Memorial Cup Final. Catch the action across the country on Sportsnet and TVA Sports as well as in the United States on NHL Network when the puck drops on Tuesday at 8:00pm MT/10:00pm ET.