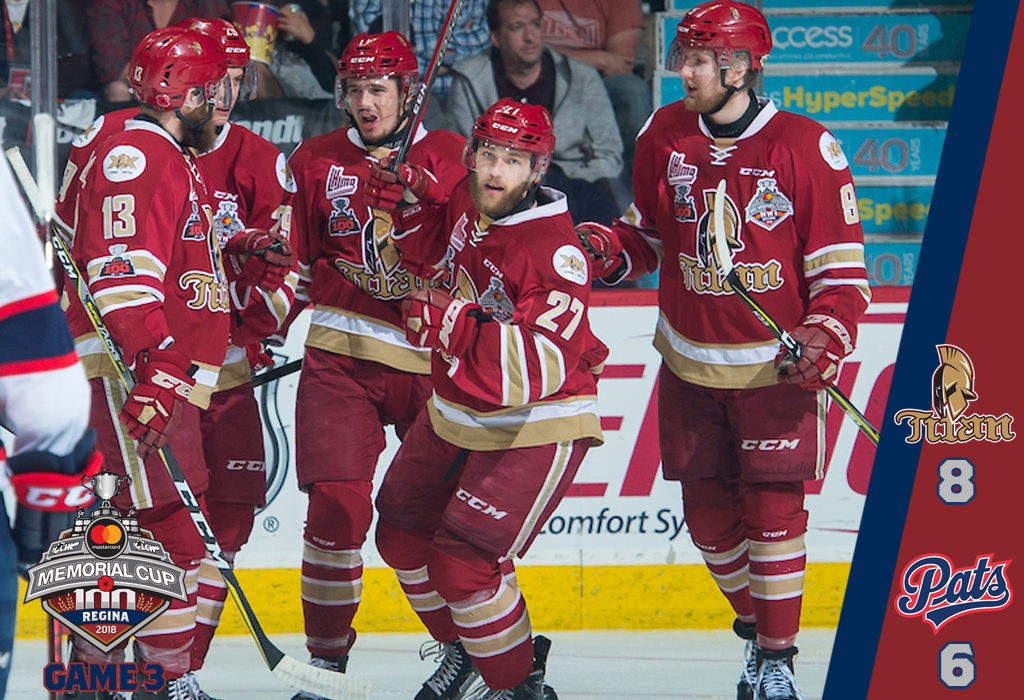 A valiant third period comeback attempt fell just short as the Regina Pats treated the home crowd to quite a show but weren’t able to bridge a big gap in the third game of the Mastercard Memorial Cup round robin.

The QMJHL champion Acadie-Bathurst Titan became the first team to reach 2-0, securing themselves at least a spot in Friday’s semi-final with an 8-6 decision as draft eligible defenceman Noah Dobson starred with two goals and two assists.

Down 7-2 early in the third period, the Pats found late life, scoring four consecutive to pull within one before Dobson put things out of reach with an empty netter in the game’s final seconds.

A desperate Pats team controlled the third, outshooting the Titan 14-5 but in the end it proved to be too little, too late.

A @WHLPats third period comeback effort falls just short as the @ABTitan hold on for an 8-6 win to improve to 2-0 at the #MCMemorialCup. #MMC100

“It was a good show for the fans and stuff like that, but at the end of the day it’s a learning process,” said Titan head coach Mario Pouliot. “We lost our focus and composure. We’re at the Memorial Cup and we’re facing good teams and we know every team is going to push hard and going to try and push back.

“For us it’s all about us staying focused and playing the game the right way.”

Pats captain Sam Steel finished the night with four assists, scarcely leaving the ice during Regina’s third period push. The Anaheim Ducks prospect spoke highly of his club’s finish, but the early hole was too much to dig out of.

“I don’t think we deserved to win with the start we had,” he said. “We played inconsistent hockey but we showed that, when we play, we’re a completely different team. We’re going to need a lot better start on Wednesday night if we want to have a better result.”

The Pats started things with a bang, coming within two seconds of a Mastercard Memorial Cup record when Cameron Hebig scored 13 seconds into the first period. The Pats regular season scoring leader jumped up and picked up a loose puck off an offensive zone faceoff, made his way into the slot and outwaited Evan Fitzpatrick to bring the Brandt Centre to its feet.

The QMJHL champions didn’t need long to respond though, striking for three goals in a span of 1:21 as Noah Dobson, Ethan Crossman and Liam Murphy lit the lamp.

Acadie-Bathurst scored three times on their first eight shots as Dobson got things started as the trailer off the rush on a delayed penalty against Regina. Pats netminder Max Paddock denied Murphy on a quality scoring chance, but couldn’t recover int time to deny Dobson who tied things at 4:31.

Crossman wired a hard wrister over the glove of Paddock just over a minute later with assists to Mitchell Balmas and Michal Ivan to put the Titan in the lead before Murphy banged in a rebound from the side of the goal, sending Acadie-Bathurst to the first intermission up 3-1.

The Titan picked up where they left off in the second as the top unit of Asselin, Murphy and Truchon-Viel went back to work. Asselin picked up his third of the tournament at 3:10, capitalizing in transition as Murphy centred for the 19-year-old centreman off the rush.

Truchon-Viel found the scoresheet just under six minutes later at 8:49, putting his team ahead 5-1 on the power play. Anaheim Ducks prospect Antoine Morand walked in off the top of the left circle, connecting with the Titan captain on a targeted deflection.

The Pats found a little life a couple shifts later as veteran forwards Matt Bradley and Jared Legien connected. The former found the latter as he crossed the offensive blue line as Legien ripped a wrister over the glove shoulder of Fitzpatrick at 10:45.

Truchon-Viel reinstated the two-goal lead off the forecheck at 13:11, forcing Paddock into a puckhandling blunder before stuffing a loose puck under his pad for an unassisted marker.

Acadie-Bathurst carried a commanding 6-2 lead into the third frame while outshooting Regina 32-24.

A Regina goaltending change brought on veteran Ryan Kubic to start the third but he surrendered the first shot he faced as Crossman scored his second of the night 1:39 into the period.

The Pats came on strong after that though as Hebig’s second of the night at 4:40 kickstarted a comeback that also featured markers from Nick Henry, Josh Mahura and Matt Bradley.

Hebig struck on a one-timer from the slot after Steel stripped a Bathurst defender of a puck below the goal line. Henry followed suit on the power play, taking a perfectly placed cross-zone pass from Steel to beat Fitzpatrick across his crease at 7:39. Mahura and Bradley both found the back of the net on wrist shots through traffic, beating a screened Fitzpatrick at 14:10 and 18:03 to make it a 7-6 game with 1:57 to go.

With Kubic on the bench, Jeffrey Truchon-Viel laid out in the final seconds to block a passing lane, setting up Dobson for the empty net marker as the final buzzer sounded and the Titan stayed perfect.

The two clubs combined for 14 goals as Regina outshot Acadie-Bathurst 38-37.

“When we look back at being 2-0 after two games, it’s a really good scenario for us,” Titan head coach Pouliot noted. “Everything happens for a reason and it’s a learning process,” he said, referencing his club’s rough third period. “We have a day off tomorrow and we’re going to fix it.”

The Pats (1-1) will have back-to-back days to prepare for a matchup with the WHL East Division rival Swift Current Broncos on Wednesday while the Titan (2-0) come out of back-to-back contests in good shape and will rest up for the Hamilton Bulldogs on Tuesday.