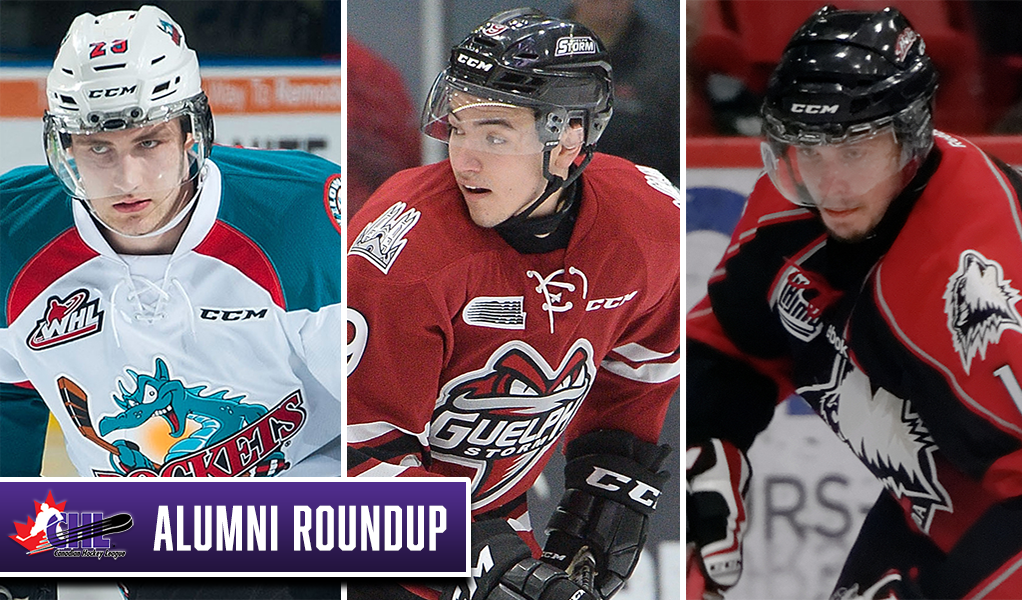 The Stanley Cup Playoffs reached its pinnacle during September, but that’s not the only place Canadian Hockey League alumni celebrated success.

Here’s a look back at some of the highlights:

The Tampa Bay Lightning hoisted Lord Stanley with a six-game series victory over the Dallas Stars powered large-in-part by some of the 19 CHL alumni on the roster. Nikita Kucherov (Rouyn-Noranda Huskies) led the team in points and assists, while Brayden Point (Moose Jaw Warriors) scored the most goals, and captain Steven Stamkos (Sarnia Sting) was an inspirational presence while battling injury.

A closer look at the team’s 19 #CHL alumni who are #StanleyCup champions representing 20 different organizations across @TheWHL, @OHLHockey, @QMJHL.

A trio of Lightning added to their championship resumes having won Memorial Cup titles during their time in the CHL. Those players include Tyler Johnson (Spokane Chiefs) in 2008, Anthony Cirelli (Oshawa Generals) in 2015, and Mikhail Sergachev (Windsor Spitfires) in 2017.

Tyler Johnson, Anthony Cirelli, and Mikhail Sergachev became the latest #CHL alumni to go from claiming the #MemorialCup to winning the #StanleyCup

While 20 different CHL organizations were represented among the players competing for the Lightning, their victory meant three teams could celebrate their first ever Stanley Cup champion. That list includes the Blainville-Boisbriand Armada courtesy of Cedric Paquette, the North Bay Battalion thanks to Barclay Goodrow, and the Saint John Sea Dogs with Mathieu Joseph.

Barclay Goodrow, Cedric Paquette, and Mathieu Joseph became the first #CHL alumni from their respective organizations to hoist the #StanleyCup

A closer look at the eight former players from across @TheWHL, @OHLHockey, and @QMJHL recognized for their outstanding #NHL achievements in 2019-20.

A closer look at the eight former players from across @TheWHL, @OHLHockey, and @QMJHL named to First, Second, and All-Rookie Teams for 2019-20.

In other off-ice news, former Kingston Frontenacs forward Chris Stewart called it a career after 668 NHL games played over parts of 11 seasons with seven teams. The 32-year-old from Toronto blossomed as an undrafted OHL free agent following his older brother Anthony to Kingston where he developed into a first round pick in the 2006 NHL Draft. He will remain involved in the game transitioning to a role with the Philadelphia Flyers in Player Development.

The interim tag has been lifted from Geoff Ward‘s title as the Calgary Flames officially named him head coach. The 58-year-old took over bench boss duties midway through the 2019-20 campaign during his second season as an associate. The former Kitchener Rangers and Guelph Storm head coach has now spent 12 seasons in the NHL and won a Stanley Cup with Boston in 2011.

Some news to kick off your week!

The San Jose Sharks also solidified their staff by officially naming Bob Boughner head coach. Another midseason replacement, the former Soo Greyhounds defenceman continues his second tour of duty with the Sharks after previously serving as an assistant following eight seasons behind the bench for the Windsor Spitfires. The two-time CHL Coach of the Year and Memorial Cup champion has two years of head coaching experience in the NHL with the Florida Panthers.

Bob Boughner has been named the ninth #SJSharks head coach in franchise history!

The Toronto Maple Leafs have hired a pair of CHL graduates to fill assistant coach positions including Manny Malhotra and Paul MacLean. The former won an OHL championship back in 1998 with the Guelph Storm before an NHL career that spanned 991 games through 2014-15 and then three seasons as an assistant with the Vancouver Canucks. The latter played for the Hull Olympiques in 1977-78 before an NHL career of his own that lasted 719 games. The 2013 Jack Adams Trophy winner was most recently part of the Columbus Blue Jackets staff.

Manny Malhotra is joining the Leafs bench as an assistant coach. #LeafsForever https://t.co/Y2SWEEW5jn

MacLean has been hired as an assistant coach. #LeafsForeverhttps://t.co/UAHq4czX9N

Windsor Spitfires assistant coach Mike Weber is moving on to new opportunities in the AHL after spending the last two seasons with the OHL club he played for from 2004-07. The former NHL defenceman chosen in the second round of the 2006 NHL Draft will be joining the Rochester Americans staff when play resumes.

🚨NEWS | We have named Adam Mair and Mike Weber to serve as assistant coaches on the staff of head coach Seth Appert.

The ECHL’s Rapid City Rush have signed recent CHL grad Gary Haden. The 21-year-old centre from Airdrie, Alberta, just finished his fifth WHL season as a member of the Victoria Royals after previously suiting up for the Saskatoon Blades and Medicine Hat Tigers.

One of the best to ever play between-the-pipes in Victoria is headed to U SPORTS. Goaltender Griffen Outhouse, who finished his four-year WHL career in 2019, most recently played a season of pro between ECHL Jacksonville and AHL Manitoba. He’s now enrolled at the University of New Brunswick where he’ll man the crease for the Reds.

Some of the only hockey being played these days is overseas and in the KHL a former CHL defenceman quickly made his mark. 2019 OHL champion Dmitri Samorukov (Guelph Storm) opened play with a goal just 51 seconds into action for CSKA Moscow. He’s a 2017 Edmonton Oilers third round pick who spent last season with the AHL’s Bakersfield Condors.

2016 CHL Humanitarian of the Year Will Petschenig recently released a trailer for a documentary about ‘A Heart Like Mine’. That’s the name of the program he created during his final OHL season as a member of the Saginaw Spirit helping youth who have lost a parent. The 2015 Memorial Cup champion lost his father back in 2013 when he was a member of the Oshawa Generals.

My dream. Here’s the trailer for my story about A Heart Like Mine. Full documentary will be released on October 29th, the 7 year anniversary of my fathers sudden passing. @WillsWarriors65 @Oshawa_Generals @erinotoole @fordnation

From the ice to the greens. That’s where Mitchell Theoret (Barrie Colts) has taken his athletic career. The five-year OHL forward who was drafted by the New York Islanders in the seventh round back in 2011 is now a professional caddie with golfer Taylor Pendrith. The pair enjoyed some recent success qualifying for the final round at the U.S Open finishing tied for 23rd in their first major championship.

Former @WHLGiants star @TyRonning7 has always had a community-minded approach. Hear from the @NYRangers prospect in the latest edition of the @KiaCanada Alumni Spotlight.

Former @PetesOHLHockey, @AttackOHL forward, #OHL champion and @USPORTSca Player of the Year Liam Heelis (@Heeels) has transitioned his on-ice game into brilliance behind the bench as the head coach of @McGillHockey.@KiaCanada Alumni Spotlight 🎥 pic.twitter.com/ZjCBmH5bg6

Drawn by a desire to be involved in the community and interact with fans off the ice, former @Storm_City defender and #OHL champion Garrett McFadden (@gmcfadden27) was inspired to launch mental health initiative @McFaddensMvmnt.@KiaCanada Alumni Spotlight 🎥 pic.twitter.com/rUYge7aIwJ

Nathan Chiarlitti (@NChiarlitti) draws on lessons learned over his #OHL career with @StingHockey and @AttackOHL that help him today as a @uOttawa medical student and @GeeGeesMHKY assistant coach. Among those lessons? Always putting in the work.@KiaCanada Alumni Spotlight 🎥 pic.twitter.com/oF05YMGoEq

.@KiaCanada launched the Alumni Spotlight series to help power the future of hockey by allowing former players to share their fondest #CHL memories.

Here is Nathanael Halbert, a defenseman who suited up with the @ArmadaBLB and @PhoenixSherbroo between 2013 and 2016. 📽️ 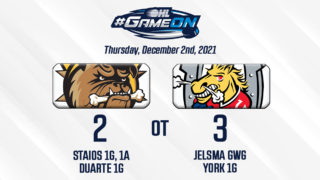 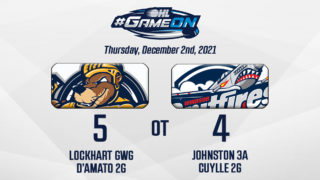 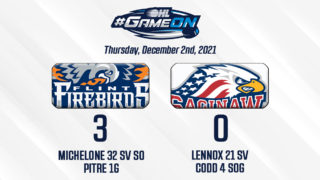 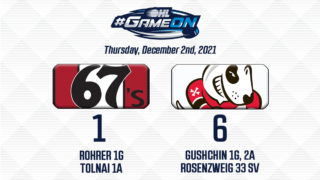 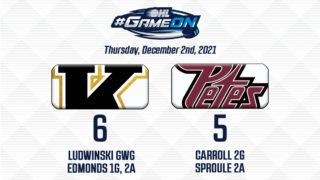