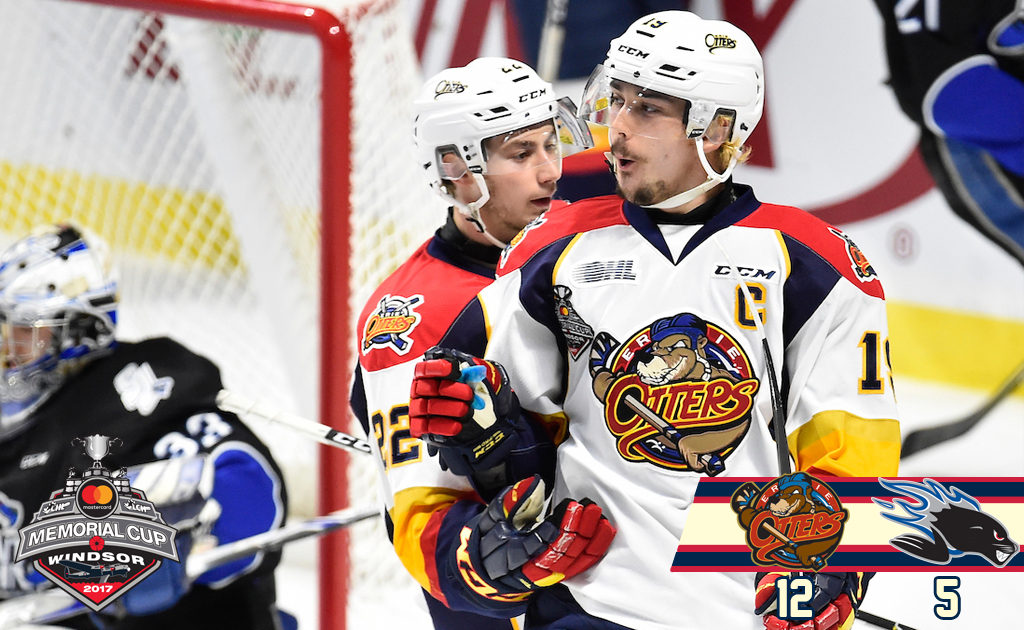 The Erie Otters skated to a record setting 12-5 win over the Saint John Sea Dogs on Monday, improving to 2-0 as captain Dylan Strome set a new Mastercard Memorial Cup record with seven points in the victory.

Strome’s four goal, three assist effort led the Otters to a Mastercard Memorial Cup record 12-goal output as the Arizona Coyotes first round selection finished the night with 10 shots on goal and went 21-for-30 in the faceoff circle.

Additionally, Strome’s seven point showing also ties him with Tyler Renette’s Otters club mark for most points in a single game, a record set on March 5, 1998 in Windsor.

“I didn’t even know it was a record to be honest with you,” said Strome when he was informed of his place in Mastercard Memorial Cup history. “We’re having fun, playing hockey and things were rolling for us but we expect a much different game against the Spitfires on Wednesday.”

“Tonight was one of our best games for the first 55 minutes,” he continued. “For whatever reason we had a good game today and we got some fortunate bounces.”

The two clubs combined for a record 17 goals, surpassing the former mark set in 1984 when the Kitchener Rangers and Kamloops Blazers combined for 16.

Brothers Taylor and Darren Raddysh both had big nights, with the former tying the pre-existing event record of six points with two goals and four assists while the latter had two goals and two assists from the back end. Anthony Cirelli and Alex DeBrincat also finished with four point showings, both recording a goal and three helpers as the Otters outshot the Sea Dogs 39-23 and went 5-for-7 on the power play.

Much like Sunday’s first period between Windsor and Seattle, the scoring pace was furious as both teams scored on their first shot of the game and combined for seven goals before the first 20 minutes expired.

Erie led 5-2 after the first as Taylor Raddysh, Darren Raddysh, Kyle Maksimovich, Strome and Cirelli all found the back of the net, ending Saint John goaltender Callum Booth’s night after he allowed five goals on 14 shots.

Rookie Cedric Paré and Tampa Bay Lightning prospect Mathieu Joseph responded with first period goals for Saint John who tried to stay in the game despite falling behind early.

Rookie netminder Alex D’Orio wouldn’t fare much better than his teammate Booth in his first action since March 18th.

Taylor Raddysh and Strome scored in the opening half of the second to open up a 7-2 Erie lead before Saint John captain Spencer Smallman cut the deficit to four at 17:52.

Erie put an exclamation mark on the second frame with two goals in the final two minutes as Alex DeBrincat and Darren Raddysh ended a run of four straight power play markers for the Otters as they led 9-3 after 40.

2017 NHL Draft prospect Ivan Lodnia scored on a slapshot 22 seconds into the third frame before Strome added two more goals to give him four on the night.

His record-breaking tally came on assists from DeBrincat and Warren Foegele with 6:40 remaining as the Otters led 12-3.

Pare’s second of the night paired with Julien Gauthier’s first of the Mastercard Memorial Cup secured a 12-5 final score as the Otters wrapped up a dominant showing, setting a new franchise mark for goals in a single playoff game in the process.

“It was pretty wide open with a lot of chances going back and fourth,” said Otters head coach Kris Knoblauch. “The difference for us was we really capitalized on our chances on odd-man rushes. We were able to get out to that early lead and it made it a much easier game to play.”

The Sea Dogs fall to 0-2 headed into a must-win game against the Seattle Thunderbirds on Tuesday.

Head coach Danny Flynn praised the Otters for their skill and execution in the lopsided affair.

“They were excellent. They and Windsor are by far the two best teams we’ve seen this year and their passing skills were excellent. When they had a chance to bury, they did.”

The 2-0 Otters now prepare for an OHL showdown with the host Windsor Spitfires on Wednesday to determine who will punch their ticket to Sunday’s Mastercard Memorial Cup Championship Final.

Saint John and Seattle’s 0-2 starts mark the first time since 2000 (Barrie, Kootenay) that two clubs have begun the round robin with 0-2 records.

The Sea Dogs and Thunderbirds meet on Tuesday to determine who will compete in Friday’s Semi-Final and who will go home winless. Catch all of the action at 7:00pm ET/4:00pm PT live on Sportsnet, TVA Sports, NHL Network and CHL Live.