Sea Dogs make a splash, advance to Semi-Final with 7-0 win 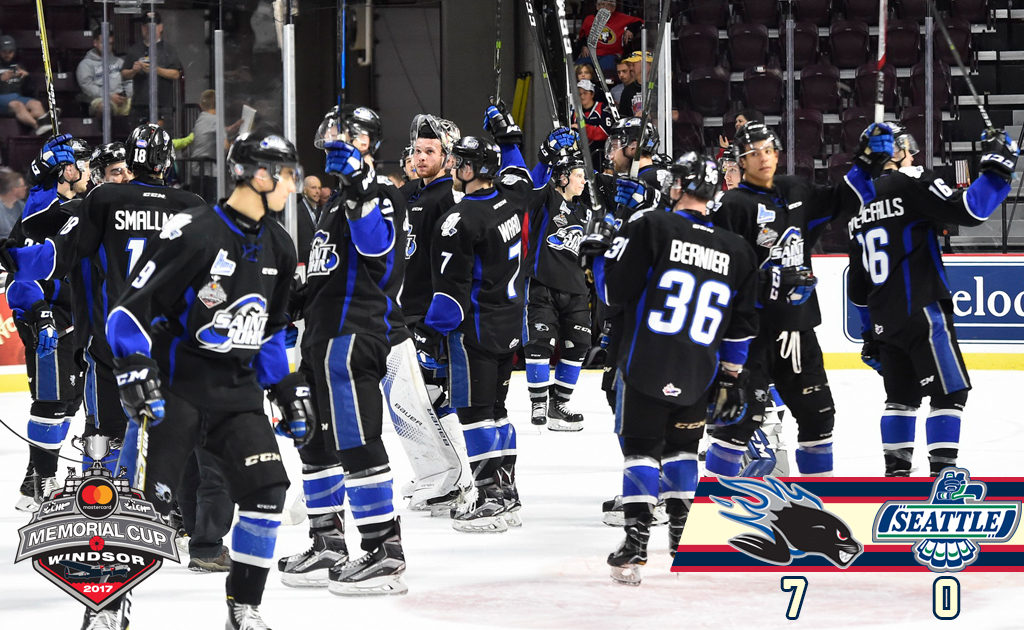 If you like goals, you’d love the 2017 Mastercard Memorial Cup.

The Saint John Sea Dogs continued a tournament trend of high-scoring success, striking for seven unanswered goals in a 7-0 blanking of the WHL champion Seattle Thunderbirds on Tuesday.

With the win, the Sea Dogs rebound from a 12-5 thumping at the hands of the Erie Otters and advance to Friday’s Mastercard Memorial Cup Semi-Final against the loser of Wednesday’s OHL showdown between Erie and the host Windsor Spitfires.

“We showed a lot of heart and a lot of character,” said Veleno. “I think a lot of veterans stepped up and led the way and I think everyone followed from there.”

“It’s not easy to do that in a tournament like this, even to score seven goals,” Veleno continued. “Once we got the first one we had the momentum and a few guys stepped up and we got a couple more from there.”

A back-and-forth first period yielded no scoring despite quality chances for both teams.

Dynamic Saint John defenceman Thomas Chabot hit a crossbar in the opening shift of the game before being turned way by the glove of Carl Stankowski moments later.

Seattle’s best chance came off the stick of diminutive overage centreman Scott Eansor who stripped a Sea Dog of the puck in the neutral zone before racing in to be denied on a breakaway with five minutes on the clock.

Veleno kicked off Saint John’s second period scoring flurry from a wrister released from the top of the circles that got past the glove of Stankowski at 1:14.

After a relatively quiet span, the Sea Dogs broke things open with three goals in 53 seconds in the 14th minute of the second frame as defenceman Chase Stewart and forwards Mathieu Joseph and Spencer Smallman found the back of the net in quick succession to make the score 4-0.

Stankowski was relieved by Rylan Toth for the second time in the tournament after surrendering four goals on 14 shots.

The overage Toth didn’t fare much better, surrendering goals by Cole Reginato and Bokondji Imama in the final five minutes of the frame as Saint John lead 6-0 after 40 minutes.

Veleno’s second of the night came 6:21 into the third period with assists from Matthew Highmore and Imama, capping a 7-0 Saint John win to mark the most goals the franchise has ever scored in a Mastercard Memorial Cup contest.

“It’s great to get that first win under our belt, we have a lot of kids who care a lot that didn’t want to go home,” said Sea Dogs head coach Danny Flynn.

“We got the lead for the first time in the tournament and built from there.”

After an 0-3 showing, the Seattle Thunderbirds see their season come to an end not long after celebrating the franchise’s first WHL championship. The veteran core of Mathew Barzal, Scott Eansor, Ethan Bear, Ryan Gropp and Keegan Kolesar played its final game together.

“The wheels came off in a hurry after they scored that second goal,” said Seattle head coach Steve Konowalchuk.

Seattle led the shooting column 20-10 at one point in the game and outshot Saint John 31-28 in the loss.

“They battled hard, but you know it just felt like they were done mentally,” Konowalchuk added. “We go down 2-0 today and usually we come right back, we have all year. They didn’t have that today and to me, it just shows that there’s nothing left mentally.

“They’re all good character kids and they work hard, there’s just no juice left to keep fighting and to keep pushing and that’s where we’re at.”

The Sea Dogs await the outcome of Wednesday’s round robin conclusion between the Erie Otters and Windsor Spitfires who both enter action with 2-0 records.