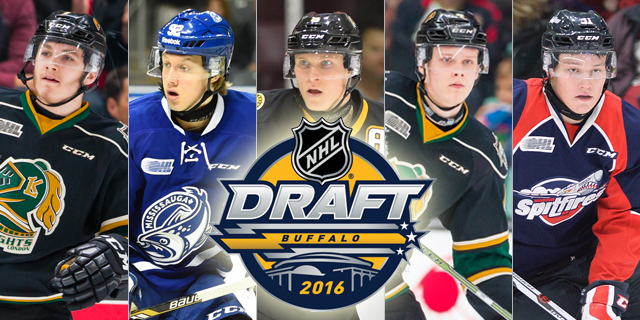 After seven OHL players were selected in the first round of the 2015 NHL Draft in Florida last year, another strong crop of prospects coming out of the Ontario circuit is likely to factor prominently into the early proceedings of next week’s NHL Draft in Buffalo, NY.

The ‘O’ has the bases covered on both forward and defence, boasting skilled players from across the globe that will likely account for a number of selections taken in the opening two rounds.

Following in the footsteps of his longtime NHL veteran father Keith Tkachuk, Matthew did all the right things this season as he made the jump to the OHL. After racking up 107 points (30-77–107) in 57 regular season games, Tkachuk played a starring role in London’s march to the MasterCard Memorial Cup, fueling their historic 13-game playoff winning streak with 20 goals, 20 assists and 40 points in 18 games. He scored the overtime winner in London’s unforgettable Memorial Cup championship win over the Rouyn-Noranda Huskies.

“We’ve watched Matthew all year and he’s obviously an exciting player,” St. Louis Blues director of amateur scouting Bill Armstrong recently told NHL.com’s Mike Morreale. “His dad is a part of our staff and we’re genuinely excited for the family and for Matthew.”

“Tkachuk finds a way to produce,” said another NHL scout. “I don’t care what level he plays, he finds a way to score. He’s smart with the puck and so strong.”

Trailing close behind is another OHL star with NHL bloodlines in Alexander Nylander, the son of long-time NHL centreman Michael Nylander.

Alexander Nylander's skill set and blood line makes him an intriguing prospect at the #NHLCombine #MeetTheFuturehttps://t.co/b5v19vJs7p

In the discussion with Tkachuk and Cape Breton Screaming Eagles star Pierre-Luc Dubois as the top draft eligible left winger heading into next weekend, Nylander, who shoots right and plays his off-wing, comes off an impressive showing at the NHL Scouting Combine. He had the highest peak power output on the Wingate cycle ergometer, which measures a player’s explosiveness, at 21.1 watts per kilogram. He also tied for sixth on the bench press with 13 repetitions at 135 pounds (75-80 percent of his body weight).

Tkachuk and Nylander are unlikely to make it out of the top 10 selections, but after them a number of quality forwards including 6’6″ centreman Logan Brown (Windsor Spitfires), hard-working pivot Michael McLeod (Mississauga Steelheads), intriguing power winger Max Jones (London Knights), undersized scorer Alex DeBrincat (Erie Otters) and fan favourite Boris Katchouk (Sault Ste. Marie Greyhounds) will be there for the taking.

Each player has their advocates in the discussion of who should go first, a question that won’t be ultimately answered until next weekend.

Chychrun overcame his injury setbacks as a rookie and put in close to a full season of 62 games where he registered 11 goals, 38 assists and 49 points. The 6’2″, 214Ibs. smooth-skating rearguard has a toolbox full of skills and played an active role at the NHL Scouting Combine last week, blogging his experience at NHL.com. He’s been described by scouts as a “complete defenceman” and an “excellent skater who plays with confidence and poise.”

Juolevi’s game trended upward throughout the season as he led Finland to gold at the 2016 World Junior Hockey Championship, finishing tied for the tournament lead in scoring by defencemen with nine points in seven games. He then played a big role in London’s MasterCard Memorial Cup title, logging big minutes to be named to the tournament all-star team.

Sergachev led all OHL defencemen with 17 goals this season, finishing his rookie campaign with 57 points (17-40–57) in 67 games. He is just the second rookie to ever receive the the Max Kaminsky Trophy awarded to the OHL Defenceman of the Year. He’s been described as a “solid two-way defenceman with good offensive skills” and “a very smart player with and without the puck.”

Fellow Windsor Spitfires defenceman Logan Stanley, who stands 6’7″, 220Ibs. could also make his way into the opening rounds of the draft with his great blend of size and skill.

As far as goaltenders are concerned, London Knights standout Tyler Parsons, who elevated his game as the year wore on and led his team to the promised land, has established himself as the OHL’s top draft eligible goaltender. Other names that could enter the discussion as the draft progresses are Joseph Raaymakers (Sault Ste. Marie Greyhounds), Dylan Wells (Peterborough Petes) and Evan Cormier (Saginaw Spirit).

Expect to hear OHL names early and often in Buffalo next weekend as the 2016 NHL Draft gets underway on June 24th at First Niagara Center.

(LW) Matthew Tkachuk – London Knights [2]
57 GP, 30 G, 77 A, 107 PTS
“Unique with his skill and physical attributes. Possesses elite hockey sense and vision to consistently find ways to contribute and impact. Makes players around him better and has a very good scoring touch around the net. Plays inside the dots and is willing to go to the hard areas to score goals. One of the best puck protection players in the Draft.”

(LW) Alexander Nylander – Mississauga Steelheads [3]
57 GP, 28 G, 47 A, 75 PTS
“Dynamic player with an elite skill-set to go along with NHL speed and quickness. Skilled to make plays at top speed and extremely dangerous in one on one situations. Very good offensive hockey sense to create scoring chances and deceptively quick offensive instincts which make him a scoring threat every time he’s on the ice.”

(D) Olli Juolevi – London Knights [5]
57 GP, 9 G, 33 A, 42 PTS
“Smooth skating, puck moving defenceman with excellent poise and composure. Displays elite hockey sense and instincts with and without the puck. Plays in every situation and possesses the skills and smarts to have a positive impact on the game in a number of different ways.”

(C) Logan Brown – Windsor Spitfires [7]
59 GP, 21 G, 53 A, 74 PTS
“A playmaking centreman with excellent size who brings a big presence up the middle. Has very good puck handling skills and sees the ice well, making tape to tape set up passes. Confident and poised game with the puck. Skates well with a long, fluid stride and has deceptive speed for his size. Works the power play well and is very effective in the faceoff circle.”

(D) Mikhail Sergachev – Windsor Spitfires [8]
67 GP, 17 G, 40 A, 57 PTS
“Solid two way defenceman with good offensive skills. Plays with poise and confidence. Is an excellent skater with an effortless stride, possesses deceptive speed and quickness. Very good coverage and one on one game utilizing his mobility, gap and body positioning. Very smart player with and without the puck. Boasts good instincts to make the right play at the right time.”

(C) Michael McLeod – Mississauga Steelheads [13]
57 GP, 21 G, 40 A, 61 PTS
“Excellent hard-working, two way forward with speed, quickness and smarts. Plays with drive and determination to the net making him very hard to check. Is very effective generating chances on the rush or on the forecheck. Very good offensive skills as a playmaker handling and moving the puck. Strong along the boards and battles for pucks effectively by using smart body positioning. Capable and consistent in all situations.”

(LW) Max Jones – London Knights [14]
63 GP, 28 G, 24 A, 52 PTS
“Power forward who is an excellent skater and displays separation speed. Hard hitting player who plays the game with an edge. Very good shot with a quick release. Loves to take the puck to the net and has good hands in tight.”

(D) Logan Stanley – Windsor Spitfires [19]
64 GP, 5 G, 12 A, 17 PTS
“Excellent size / strength defender who plays with confidence and authority. Mobile enough to handle speed and defend against the rush. Very tough to beat in one on one play and has a good understanding of positioning and very good stick to puck technique utilizing his size & long reach. Plays with authority and maintains coverage in D zone. Is comfortable handling the puck and composed under forecheck pressure to make a good first pass out of zone.”

(RW) Alex DeBrincat – Erie Otters [21]
60 GP, 51 G, 50 A, 101 PTS
“Elite hockey sense and finishing ability which can’t be taught. Excellent movement away from the puck and an awareness of where to go to score goals. Tenacious on pucks and isn’t afraid to play in traffic despite his size.”