WHL features balance of draft talent at each position 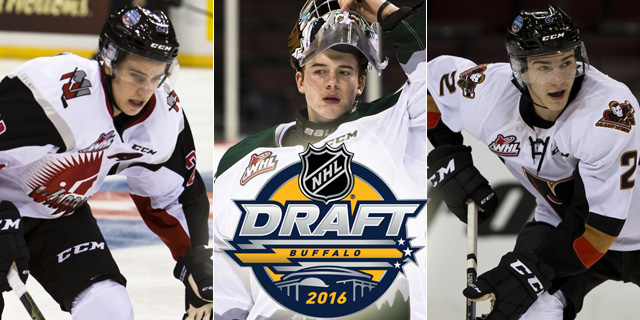 While this year’s draft class coming out of the WHL may not have a clear cut star in its ranks, there’s lots to like all across the depth chart as a range of skilled forwards, capable skating blueliners and some of North America’s best goaltenders will be up for grabs next weekend in Buffalo.

Hart, who won gold with Canada at the Ivan Hlinka Memorial Tournament last summer, was honoured to receive CHL Goaltender of the Year honours. He was recently invited to Canada’s Program of Excellence Goaltending Camp in Calgary this coming summer.

In being named CHL Goaltender of the Year, Hart joins current day NHL stars such as Cam Ward, Carey Price and Jake Allen in earning the distinction.

“I talked to the #Oilers… There’s good guys in there. It’s lots of fun, this whole process.” Carter Hart #NHLCombinehttps://t.co/qkkpM3e50a

“It was a huge honour to win that award,” he told Kristen Odland of the Calgary Herald, “You look back at some of the names that have won it. There’s some pretty big names on there.”

While the WHL produced the CHL’s top goaltender, the west continued the long-standing tradition of producing quality talent on the back end.

Bean, who was once passed over in the WHL Bantam Draft, has blossomed into a big-time offensive contributor with the Hitmen, leading all WHL defencemen with 24 goals to finish the season with 64 points (24-40–64) in 68 games.

“He’s certainly been impactful,” Hitmen coach Mark French told the Calgary Herald. “He really worked hard at developing a real good shot and made that an asset. He’s certainly using it. It’s been a real nice addition to his game.”

Johansen, who is the younger brother of Nashville Predators centreman Ryan Johansen, is also somewhat of a late bloomer after being a sixth round pick by the Kelowna Rockets in 2012. The 6’1″, 176Ib. defender took a big step forward this season, recording 10 goals, 39 assists and 49 points in 69 games, 41 points more than his rookie total in 2014-15.

After overcoming injuries that plagued much of his rookie season, Brandon’s Kale Clague suited up in 71 games this past season, compiling six goals, 37 assists and 43 points before a productive playoff run that included 14 points (6-8–14) over 21 games as the Wheat Kings won their first WHL title in 20 years.

Czech defender Libor Hajek (Saskatoon Blades) and a strong skater in Max Lajoie (Swift Current Broncos) could also hear their name called in the opening half of next weekend’s proceedings.

Up front, the WHL’s forward class is led by 22nd ranked North American skater Brett Howden of the Moose Jaw Warriors. The 6’3″, 190Ib. centreman is the younger brother of Florida Panthers forward Quinton Howden, following in his steps as a prominent Moose Jaw forward.

Talented Regina Pats playmaker Sam Steel, who went second overall behind Benson in 2013, offers another alternative to teams in search of offensive talent.

Undersized forwards in Dillon Dube (Kelowna Rockets) and Noah Gregor (Moose Jaw Warriors) have also been in the NHL Draft discussion throughout much of the season along with Prince Albert Raiders winger Simon Stransky.

The WHL is likely to have a lot to offer in the middle rounds of the 2016 NHL Draft, with a few of their top prospects in Bean and Howden drawing some interest in the early going.

(D) Jake Bean – Calgary Hitmen [15]
68 GP, 24 G, 40 A, 64 PTS
“Very dynamic and smart offensive player that is poised in all aspects of the game to get the job done. Excellent shot, and can score from the point or off the rush. Good playmaking ability and strong game at the offensive blue line. Defends well using his mobility and smarts and is capable of being a game breaker.”

(C) Brett Howden – Moose Jaw Warriors [22]
68 GP, 24 G, 40 A, 64 PTS
“Displays very good speed and acceleration in all areas of the ice. Plays with determination to generate offense when driving to the net from both wings. Very effective on the penalty killing unit utilizing his size, speed and tenacious fore-checking to force turnovers. A valuable team player that can bring different dimensions to the game.”

(LW) Tyler Benson – Vancouver Giants [24]
30 GP, 9 G, 19 A, 28 PTS
“Is a smart and skilled winger with high end offensive instincts. Plays a very strong game on the puck and is effective in all game situations. A very good passer with excellent vision and play making ability. He plays with an edge and will stand up for his teammates. Possesses strong leadership ability.”

(D) Lucas Johansen – Kelowna Rockets [26]
69 GP, 10 G, 39 A, 49 PTS
“Possesses good size and strength and is developing into solid two way defenceman. Has good hands and puck skills to manage the play at the offensive blue line. Boasts an excellent short game with his passes and has a good shot from the point. Plays an effective game with and without the puck.”

(D) Kale Clague – Brandon Wheat Kings [27]
71 GP, 6 G, 37 A, 43 PTS
“His skating asset is strong; eludes defenders while being checked or starting an offensive play. He displays excellent vision when moving the puck, makes solid first pass out of zone. Has ability to make good decisions on when to lead or join the rush and uses his smarts to strip opponents off the puck to gain possession. He’s a composed player who makes good choices under pressure.”

(C) Sam Steel – Regina Pats [30]
72 GP, 23 G, 47 A, 70 PTS
“Excellent skater with breakaway speed. Displays high level vision to match top end skill set. Plays a quick read and react game and sets up his teammates as well as any play maker in the WHL. Heads up player in all zones, quick to cause turnovers and scoring chances on the penalty kill. Not physical, but doesn’t back away in a physical game.”

(D) Libor Hajek – Saskatoon Blades [31]
69 GP, 3 G, 23 A, 26 PTS
“Strong skater with very good speed, agility and mobility. Very good at starting the rush and making the first pass out of zone. See the ice well to not put teammates in bad positions and outlets smartly for partner. Good awareness of his defensive responsibilities and solid containment game handling one on one situations. Utilizing size effectively to play the body as well as showing good anticipation to step up in the neutral zone to make a hit.”

(G) Carter Hart – Everett Silvertips [2]
63 GP, 35-23-4, 2.14 GAA, .918 SV%, 6 SO
“Very poised, patient and calm in the net; doesn’t get rattled. Displays a focused and consistent technique with positioning and crease management. Stays square on the play and plays out to the top of the crease. Very good at reading and reacting to plays. Excellent butterfly coverage and seals the ice well with his pads, keeping his body upright to protect the upper corners. Has very good rebound control to minimize secondary chances.”

(G) Zach Sawchenko – Moose Jaw Warriors [6]
51 GP, 28-16-6, 3.04 GAA, .916 SV%, 2 SO
“A very quick, athletic goalie that plays with focus and determination to hold his ground. Has a strong stance and powerful leg drive when moving laterally, leading to excellent east/west play. Has great butterfly coverage to seal the ice and protect the five hole. Never gives up on a play.”