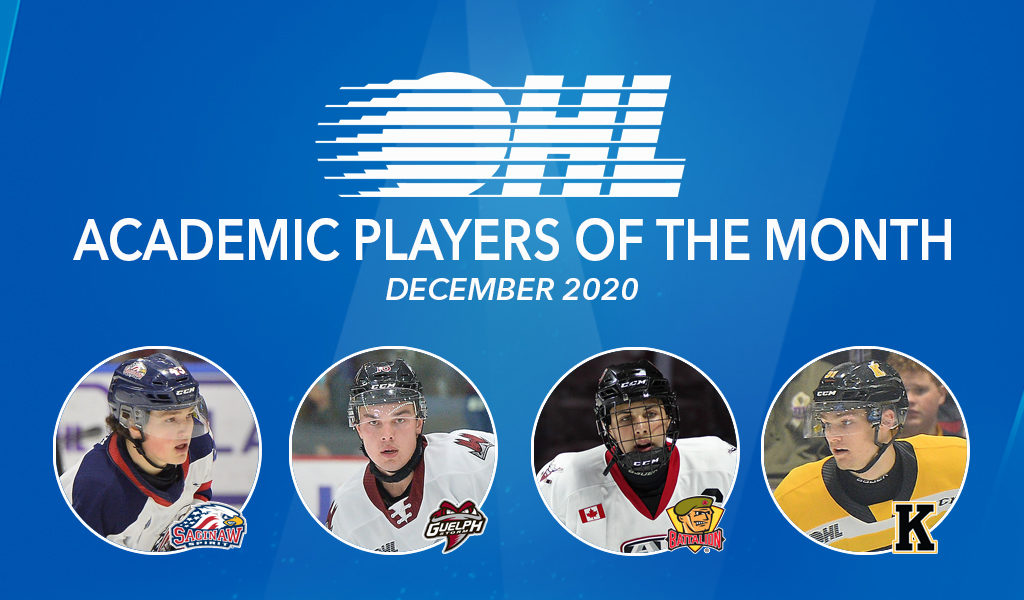 Toronto, Ont. – The Ontario Hockey League today announced that Shane Wright of the Kingston Frontenacs, Tnias Mathurin of the North Bay Battalion, Eric Uba of the Guelph Storm and Davis “T-Bone” Codd of the Saginaw Spirit have been named OHL Academic Players of the Month for December.

Though the puck has yet to drop on the 2020-21 OHL Regular Season, players are striving for excellence in the classroom through their studies. The League continues to work with government and public health agencies to prepare a safe return to play. Academic players of the month are listed in correspondence with their 2019-20 divisions. Details concerning the structure of 2020-21 team alignment will be made available upon release of the OHL Regular Season schedule.

Here’s a closer look at the OHL’s Academic Players of the Month for December:

East Division: Shane Wright of the Kingston Frontenacs is being recognized as December’s East Division Academic Player of the Month. He completed two grade 11 courses heading into the school year and currently carries an 89% average.

The newly-turned 17-year-old exceptional talent led the Frontenacs with a record-breaking 39 goals and 66 points in 58 games as a rookie over the 2019-20 season. He was the recipient of the Emms Family Award, was named CHL Rookie of the Year and, at 16-years-old, was recently one of 18 OHL players invited to Canada’s National Junior Team Development Camp.

Central Division: North Bay’s Tnias Mathurin is December’s Central Division Academic Player of the Month. He boasts a 93% in English and as well as a 94% in Mathematics at Chippewa Secondary School and is described as a “very strong, diligent student with strong marks since grade 9.”

The 17-year-old defenceman was selected by the Battalion in the third round, 41st overall at the 2020 OHL Priority Selection. The Ajax, Ont. native scored seven goals and earned 12 assists for 19 points in 35 games with the Ajax-Pickering Raiders U16 squad in 2019-20.

Uba is currently enrolled in a Bachelor of Commerce degree at the University of Guelph where he has maintained an 88% grade in Business Math, an 86% in Life and Well-Being and a 76% in Macroeconomics. At the same time, he is also maintaining his on and off ice training regiments in preparation for the start of the 2021 season. He is described as a “very focused, determined and self-motivated student” and “an excellent role model for his teammates, exemplifying what it means to ‘embrace the best of both worlds.’’

“T-Bone’s personality and attitude are infectious, and he truly leads through example while focusing on his many scholastic, athletic and community service commitments. He volunteers at numerous events in his hometown of Brighton, Michigan as well as Saginaw, Michigan. He is well liked and respected by his peers and adults alike,” Moretuzzo continued. “T-Bone is an exceptional young man. He is polite, responsible, honest, hard-working, and a role model for others. T-Bone’s work ethic and perseverance are second to none and he will undoubtedly achieve any goals he sets.”

Players listed in correspondence with 2019-20 divisions. Details concerning the structure of 2020-21 team alignment will be made available upon release of the OHL Regular Season schedule.

A total of 334 graduates utilized their OHL Scholarship at post-secondary institutions across North America during the 2019-20 academic year, with a total contribution by teams of over $3 million.  Over the past 10 seasons, OHL Scholarship payments have totalled more than $25 million.