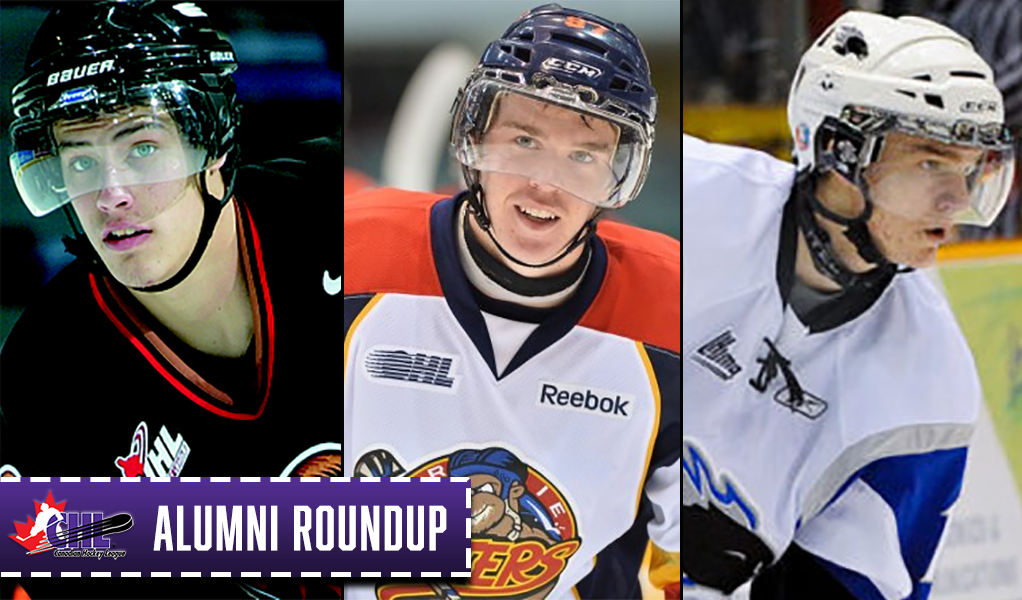 Canadian Hockey League graduates are shining across the pro ranks this season.

Across 29 appearances, McDavid has tallied a league-leading 51 points counting 19 goals and 32 assists. Through 14 contests in November, the 2014-15 CHL Player of the Year collected 13 goals and 13 assists for 26 points to mark the best performance by an Oilers skater since 1988 as he earned recognition as the NHL’s First Star for November. The month also saw McDavid reach the 400-point plateau, doing so in 306 career games, the 13th fewest in NHL history. McDavid also becomes one of just seven players to score 400 points before his 23rd birthday.

In all, CHL graduates swept NHL Three Star honours for November as MacKinnon claimed second-star recognition after collecting 25 points counting 10 goals and 15 assists across 14 appearances, marking the best single-month performance of his career and the top monthly showing by a Colorado Avalanche skater since 1995-96. Rounding out the list, Chicago Blackhawks forward Patrick Kane (London Knights) received third-star recognition after tallying at least one point through all 15 of his appearances in November as he finished with 11 goals and 13 assists for 24 points. The stretch also saw Kane record his 600th career assist.

Patrick Kane has points in 14 straight games for the fourth time in his career:

The accomplishments continue on the back end where the top two scoring defencemen are also CHL graduates in Washington Capitals blue-liner John Carlson (London Knights), who leads all rearguards with 37 points, followed by Carolina Hurricanes defenceman Dougie Hamilton (Niagara IceDogs) coming in at 28 points. Joining the Hurricanes in June 2018, Hamilton has made an immediate impression with the franchise, scoring 26 goals in his first 100 games, the most in franchise history since Mark Howe (Toronto Marlboros) scored 31 times in his first 100 appearances with the former Hartford Whalers franchise. Rounding out the blue line honours, November saw Montreal Canadiens captain Shea Weber (Kelowna Rockets) net the 100th power play goal of his career, the most among active defencemen.

Dougie Hamilton scored his 26th goal as a member of the @Canes, the second-most by a defenseman through his first 100 career regular-season games with the franchise. #NHLStats pic.twitter.com/kkenvfYdgd

Between the pipes, CHL graduates have also had success as Arizona Coyotes netminder Darcy Kuemper (Red Deer Rebels) leads all goaltenders with a .935 save percentage and 1.97 goals-against average (minimum 18 games played). Kuemper is one of seven CHL graduates to have recorded at least 10 wins in 2019-20, a group which also includes Braden Holtby (Saskatoon Blades), Jordan Binnington (Owen Sound Attack), Martin Jones (Calgary Hitmen), Petr Mrazek (Ottawa 67’s), Marc-Andre Fleury (Cape Breton Screaming Eagles), and Carey Price (Tri-City Americans). In all, it was a month of celebration for Fleury as he recorded his 450th career victory, just the seventh netminder to do so in NHL history and the fourth CHL graduate, following in the footsteps of Martin Brodeur (St. Hyacinthe Lasers), Patrick Roy (Granby Bisons), and Roberto Luongo (Acadie-Bathurst  Titan). Fleury also recorded his 58th career shutout in November to move into the Top 20 on the all-time list.

He did so in spectacular fashion, of course. 🤩🌸 pic.twitter.com/TyP8xl4stK

Success in the blue paint also came from young netminders as Chris Driedger (Calgary Hitmen) turned aside all 27 shots in his first career start, marking the first time a Florida Panthers goaltender has recorded a shutout in his debut appearance. Shutouts were also a common theme in the AHL as Chicago Wolves netminder Garret Sparks (Guelph Storm) pieced together 115 consecutive saves and a perfect streak that lasted more than three games totaling 191 minutes and 14 seconds without a goal allowed to set a Wolves’ franchise record.

Chris Driedger is the first goaltender in @FlaPanthers history to record a shutout in the first start of his NHL career. #NHLStats pic.twitter.com/qd3fG4tbUf

.@GSparks40 breaks the franchise record for the longest streak without allowing a goal!

His shutout spree lasted 191 minutes and 14 seconds and he stopped 115 consecutive shots.

Hear from the legend himself ⬇️ pic.twitter.com/p7IM73uwOF

Ryan Getzlaf has appeared in exactly 50% of the all-time regular-season games contested by the @AnaheimDucks (1,000 of 2,000).

That's the eighth-highest such percentage by a player with an NHL franchise (min. 1,000 GP contested by club). #NHLStats #Getzlaf1000 pic.twitter.com/rJPfEdVccB

Dan Hamhuis of the @PredsNHL is the seventh active NHL player to skate in 1,100+ career regular-season games and just the third defenseman (also Zdeno Chara and Jay Bouwmeester). #NHLStats pic.twitter.com/jyyC5M4lT3

Brent Seabrook is skating in his 1,100th NHL game tonight! He currently ranks second in games played for the #Blackhawks behind Stan Mikita (1,394). pic.twitter.com/6UMYYzWvEi

It’s a big night for @NHLBruins captain Big Z, who is set to skate in the 1,500th regular-season game of his NHL career. #NHLStats #Zee1500 pic.twitter.com/ucehHr4fLj

With eight points in two games, @ManitobaMoose forward Jansen Harkins has been named the @CCMHockey / AHL Player of the Week.