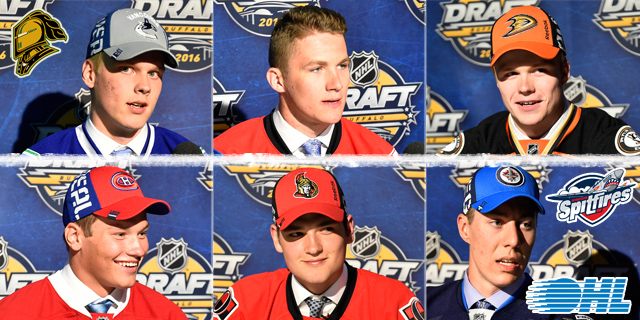 Good teams generally see the fruits of their labour harvested on draft day, and that rang true last month in Buffalo as the MasterCard Memorial Cup champion London Knights led the charge when a modern record-tying 48 OHL players were chosen at the 2016 NHL Draft.

The Knights led all CHL clubs with seven players selected while the 2017 MasterCard Memorial Cup host Windsor Spitfires set the stage for what’s sure to be another exciting season, producing a franchise record three first round picks. This marks the first time in modern draft history that two OHL clubs have each had three players chosen in the first round.

London and Windsor were joined by the Mississauga Steelheads, who had a franchise high five players chosen, in setting the pace on a busy day for the OHL.

.@Ollijuolevi was the #Canucks top-rated defenceman in the draft. They got their guy

“You hear Windsor Spitfires and you’re kind of guessing who it is, we’ve got a few guys to choose from,” said Brown with a chuckle. “Sergachev and I have some really good battles in practice and now it’s going to be even more intense.”

“We’ve got a great organization,” he continued. “Everything from coaching to management to the front office. I took a lot of big steps off the ice this year just learning with Rocky Thompson, Warren Rychel and Trevor Letowski. Those guys have all been at the NHL level and they know what it takes.”

See @sergachev31 get the full #NHLDraft experience in Buffalo.
BEHIND THE SCENES | https://t.co/c9bBMnvvFL #GoHabsGo pic.twitter.com/eHcYeVSQ3L

“It’s been a speechless couple of months here with winning the Memorial Cup and now being drafted to Anaheim,” said Jones, still processing the reality of the situation. “It’s no secret what London does in developing players for the next level. Sharing this experience with those other guys in the first round is very special and they’ve both been great for my development.”

Logan Brown more than familiar with #Sens. (via https://t.co/DebFN9BxBa)

“When we won the Memorial Cup I had the chance to meet him when we got back to London, but I never thought I’d be wearing the same jersey as him,” he said. “It’s pretty cool and I’m sure I’ll get to know him better down the road.”

While the Knights put their dominance on display in the form of a 17-game winning streak to hoist the Memorial Cup in Red Deer, many feel London stands as a strong contender entering the 2016-17 season with a returning core that could feature Juolevi, Tkachuk, Jones, Parsons, Pu, Mete and others.

Top flite NHL prospects are on both sides of the ice and this old OHL rivalry just got a lot more interesting.

For full results from the 2016 NHL Draft visit www.nhl.com.