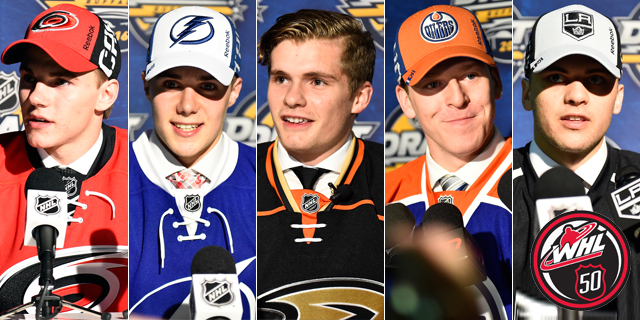 Three years after they composed five of the top six picks in the 2013 WHL Bantam Draft, promising prospects Tyler Benson, Sam Steel, Josh Anderson, Brett Howden and Kale Clague each heard their name called inside the opening three rounds of the 2016 NHL Draft in Buffalo.

The intriguing group of 1998-born talents has been at the top of their age class for several seasons now and NHL clubs have taken notice.

The one omission of course, is top 2017 NHL Draft prospect Nolan Patrick, a late 1998 birthday who was selected fourth overall by Brandon in 2013 and wasn’t eligible to be chosen in Buffalo.

The five standouts were part of a class of 34 WHL players selected by NHL clubs, with a player overlooked in the WHL Bantam Draft in Calgary Hitmen blueliner Jake Bean (Carolina Hurricanes) leading the charge at 13th overall before Howden, Johansen and Steel were also selected in the first round.

Howden, the fifth overall pick in 2013, was the first WHL forward off the board as the Moose Jaw Warrior was taken 27th overall by the Tampa Bay Lightning. The 18-year-old follows in the footsteps of his older brother Quinton, also a former Warrior who was taken by a Florida-based team, going 25th overall to the Panthers in 2010.

“I know he was feeling what I was feeling back when he got drafted,” the younger Howden said of his forerunner. “I could see the nerves in him, and I was pretty nervous as well so it’s pretty cool to be able to share this moment together.”

Kelowna Rockets defenceman Lucas Johansen followed suit one pick later, being selected 28th overall by the Washington Capitals. The younger brother of WHL graduate and Nashville Predators centreman Ryan Johansen has continued his steady development on a perennial contender in Kelowna. The 6’1″, 176Ib. Johansen registered 10 goals, 39 assists and 49 points in 69 games as a sophomore this past season.

Regina Pats centreman Sam Steel rounded out the first round at 30th to the Anaheim Ducks. Steel was the second overall pick in the 2013 WHL Bantam Draft and boosted his draft stock with a solid playoff showing, helping lead the Pats into the second round with six goals, 10 assists and 16 points in 12 contests.

“It was a long time sitting there,” said Steel, who was the final selection of Friday’s first round. “I’m just happy I was able to end the night this way.”

The WHL was at the forefront of Saturday’s second round as Vancouver Giants star Tyler Benson was taken 32nd overall by his hometown Edmonton Oilers. The first overall pick in 2013, Benson overcame adversity this past season, being limited to 30 games by a groin injury but managed to record nine goals, 19 assists and 28 points when healthy. The promising centreman grew up an Oilers fan.

“It’s a very special moment to be able to put this jersey on, the team I cheered for growing up,” Benson said with a smile. “To have my own name on it and be a part of the organization is a great moment.”

Benson was thankful for the Vancouver Giants, who have stood by him over the course of an up-and-down season.

“I have to thank the organization for what they’ve done for me,” he added. “The medical staff have really helped me heal and I’m ready to go now.”

Clague, who overcame an injury-riddled rookie campaign, rebounded as a sophomore to help the Wheat Kings claim their first WHL title in 20 years with a strong playoff showing that included six goals, eight assists and 14 points in 21 games.

“It’s nerve-wracking,” said Clague following the selection. “You don’t really know where you’re going to end up, but when the 51st pick came around with Los Angeles they called my name and it’s a whirlwind.”

Josh Anderson, the third overall pick of the 2013 WHL Bantam Draft, was selected in the third round by the Colorado Avalanche with the 71st overall pick. The 6’3″, 210Ib. Prince George Cougars defenceman recorded a goal and five assists over 39 games in an injury-shortened season.

“Honored to be drafted by a great organization. Excited to get going.” – Josh Anderson

The 34 players selected continues a productive run by the WHL at the NHL Draft, producing at least 30 selections for the 10th straight year dating back to 2007.

For full results from the 2016 NHL Draft visit www.nhl.com.