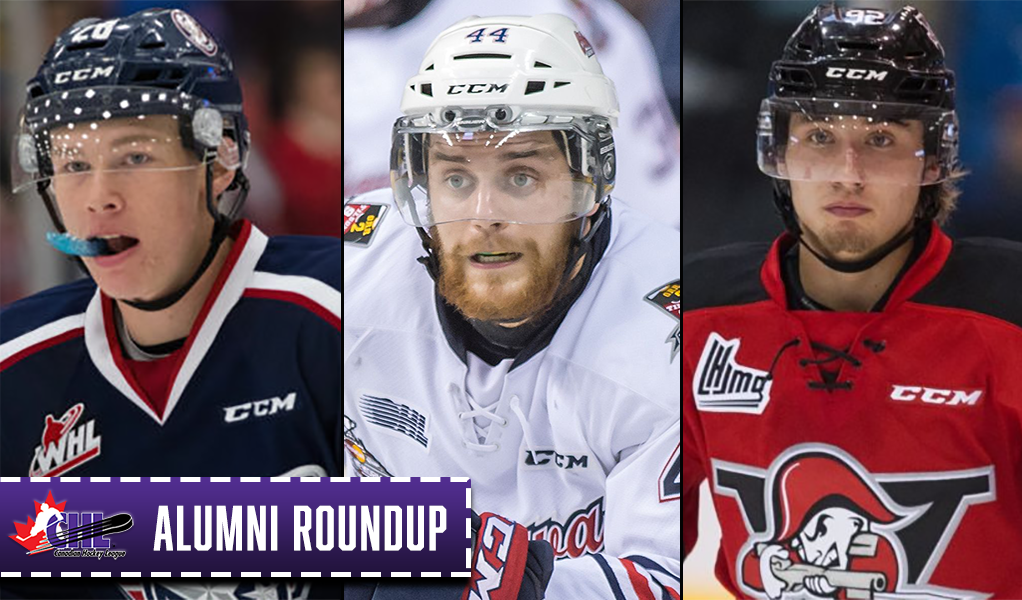 The Canadian Hockey League was one of many around the sports world affected by the COVID-19 pandemic as alumni at all levels had their season’s put on pause or outright cancelled midway through March.

Nevertheless, our league’s former stars still found ways to make their mark last month with plenty of highlights for us to recognize.

We’ll get through this. 💛🖤 pic.twitter.com/MhAc30PutB

John Tavares (@91Tavares) sends his wishes to everyone on the frontlines in both New York and Toronto. #NationalDoctorsDay #HockeyAtHome pic.twitter.com/t4Q6A2C3pg

Social media has also provided us with a behind the scenes look at how some of the league’s stars have honed their skills at home like Max Domi (London Knights) of the Montreal Canadiens, Tomas Jurco (Saint John Sea Dogs) of the Edmonton Oilers, and Andrei Svechnikov (Barrie Colts) of the Carolina Hurricanes.

Players have also shown that time away from the rink provides opportunities to stay active in other ways like fishing for Canadiens goaltender Carey Price (Tri-City Americans), spikeball for Anthony Mantha (Val-d’Or Foreurs) of the Detroit Red Wings, and golf for Nazem Kadri (London Knights) of the Colorado Avalanche.

Anthony Mantha (@antomantha8) with a new twist on Spikeball. #HockeyAtHome

A HOLE IN ONE! Nazem Kadri's (@43_Kadri) chip game is strong. #HockeyAtHome

The pause has also provided players with the opportunity to spend more time at home with their families as shown by new father Jordan Eberle (Regina Pats) of the New York Islanders, Antoine Roussel (Chicoutimi Sagueneens) of the Vancouver Canucks, and Avalanche captain Gabe Landeskog (Kitchener Rangers).

A message from @jeberle_7 and the newest member of our #Isles family, baby Collins! 💙👶🏻🧡 pic.twitter.com/9goVRgaOfa

Kitchen skating is loads of fun with Antoine Roussel (@Rous_ant) and family.

Lenny is a mood. 😂 #HockeyAtHome

Marc-Edouard Vlasic is making the most of family time.

Unfortunately, the COVID-19 pandemic has put thousands of arena staff out of work as a result of cancelled games. Many players across sport, like Marc-Andre Fleury (Cape Breton Eagles) of the Vegas Golden Knights, have stepped up to provide generous contributions to help those most in need.

Statement from Marc-Andre Fleury who has committed to pledge $100,000 to these efforts 🌸 #VegasBorn pic.twitter.com/1XkCGIW7XF

The #NHLPAPlayerPoll has returned for the 2019-20 edition, in which 588 players from each of the 31 NHL clubs were polled anonymously on 20 hockey-related questions during the season 👉 https://t.co/tEYAl5V73o pic.twitter.com/I2Vx0hQyt8

Following a season with the AHL’s San Diego Gulls, defenceman Hunter Drew was signed to an entry-level contract by the Anaheim Ducks. Drew was the club’s sixth round pick in the 2018 NHL Draft and played three seasons with the Charlottetown Islanders from 2016-19.

While games may have been limited in March, there were still several milestones met on the ice including a historic play by the Blackhawks that featured Dach and fellow rookie Adam Boqvist (London Knights) becoming the first pair of 2000-born players to factor on the same goal.

Adam Boqvist and Kirby Dach each collected an assist as the @NHLBlackhawks opened the scoring.

It marked the first time in NHL history that multiple players born in the 2000s factored on a goal. #NHLStats pic.twitter.com/3gCvJLmx82

Another one for the record books came courtesy of Ducks power forward Nicolas Deslauriers (Gatineau Olympiques) whose first career hat-trick was scored naturally in a franchise record span of 11:49 on March 10.

Scores a huge one & hits the 20-goal mark for the third-straight season? @NHL game 600 for Nuge was pretty, pretty good. @RNH_93 | #LetsGoOilers pic.twitter.com/19qcvpIxH5

Crosby continues to make history with the Penguins becoming just the sixth player to reach 800 career regular season assists in fewer than 1,000 games.

He is the sixth player in NHL history to reach 800 career regular-season assists in fewer than 1,000 games. #NHLStats pic.twitter.com/Xogm1fasE0

There were first career goal celebrations in Jersey where Devils defenceman Dakota Mermis lit the lamp on March 6 in his eighth game of the season and with his new club having spent most of the season in the AHL with the Binghamton Devils. Mermis played three full OHL seasons winning a 2013 championship with the Knights before joining the Oshawa Generals in 2015 where he added another league title plus a Memorial Cup to his collection.

Perhaps the only thing better than scoring your first career goal, is scoring two, in your first game! That’s exactly what happened for Morgan Geekie (Tri-City Americans) who burst onto the scene for the Canes with a pair of goals and an assist in his March 8 debut. He followed that performance with a goal in his second career game on March 10 right before the stoppage. The Strathclair, Manitoba, native was a third round pick by Carolina in 2017 after completing what would be his best of four WHL seasons where he recorded 90 points including 35 goals over 72 games.

Morgan Geekie did a family interview after his 2-goal @NHL debut 😇 pic.twitter.com/8G21LVna4i

Another exciting NHL debut was made before the stoppage as Blackhawks defenceman Nicolas Beaudin played his first career game on March 11 in a 6-2 win over the Sharks. Beaudin was part of the 2019 class of CHL graduates following a 56-point campaign to wrap up a three-year career with the Drummondville Voltigeurs a year ago. He was Chicago’s first round pick in the 2018 NHL Draft.

Dream come true playing in my first NHL game. I want to thank everyone who has been there since day one. pic.twitter.com/gnwBJaIaO9

The number one will forever hang in the rafters for Florida Panthers fans to remember Roberto Luongo. The goaltender was honoured back on March 7 by the club he played 11 of his 20 career NHL seasons with including six straight until retirement in 2019. The CHL grad played three seasons with the Val-d’Or Foreurs who selected him second overall in the 1995 QMJHL Entry Draft winning a 1998 President’s Cup before hoisting the trophy again the following year with the Acadie-Bathurst Titan.

Up in the rafters forever.

One last NHL note is a feel good story worth sharing from St. Louis where the Blues highlight the relationship between sophomore Robert Thomas and his former billet brother Owen McGonigal. The pair formed a bond during Thomas’ time with the London Knights from 2015-18 and have together celebrated both a Memorial Cup and Stanley Cup championship. McGonigal suffers from a form of muscular dystrophy.

In a time where supporting people is more important than ever, @RThomas_27's relationship with his billet brother – who suffers from a form of muscular dystrophy – should serve as a model for all of us. https://t.co/kEC4ZmtwfF #stlblues

In American Hockey League news, Reid Boucher (Sarnia Sting) is having one heck of a year. Second in league scoring at the break, Boucher’s 67 points in 53 games includes 34 goals which recently set a new Utica Comets single season record.

Reid Boucher is having one heck of a year.

Boucher potted his 32nd goal last night, breaking the @UticaComets single-season goal-scoring record (that he set himself a year ago.) 🚨 pic.twitter.com/ZFTNq4JUMF

Another minor league milestone was set by Grand Rapids Griffins defenceman Brian Lashoff (Kingston Frontenacs) who became just the ninth player in league history to skate in 500 career games entirely with one club.

Additional AHL reading that recognizes some unique CHL alumni includes a story about Jack Studnicka (Niagara IceDogs) who is excelling as the league’s shorthanded goals leader with seven scored in 60 games over his first season with the Providence Bruins.

There's no one better shorthanded than @AHLBruins forward Jack Studnicka.

Studnicka has collected seven shorthanded goals, tying the AHL record for most SHGs by a rookie.

And fellow 2019 grad Nate Schnarr (Guelph Storm) is making a difference off the ice as a mental health advocate within the Devils organization since becoming an ambassador for McFadden’s Movement during his time spent in the OHL.

“I’m using a voice that hockey has given me."@BingDevils forward Nate Schnarr is using his platform to help destigmatize mental illness

The U SPORTS season may have come to a disappointing end before a national champion was crowned, but several CHL alumni still received recognition for their outstanding play as student athletes at the league’s annual awards ceremony. Among the top recipients was Taran Kozun (Seattle Thunderbirds) who became the first ever to win both Player and Goaltender of the Year honours.

A trio of #WHLAlumni have been named to @saskhockeyhall's Class of 2020! 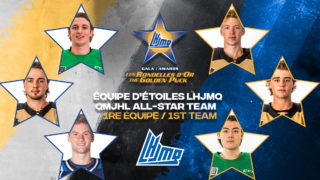