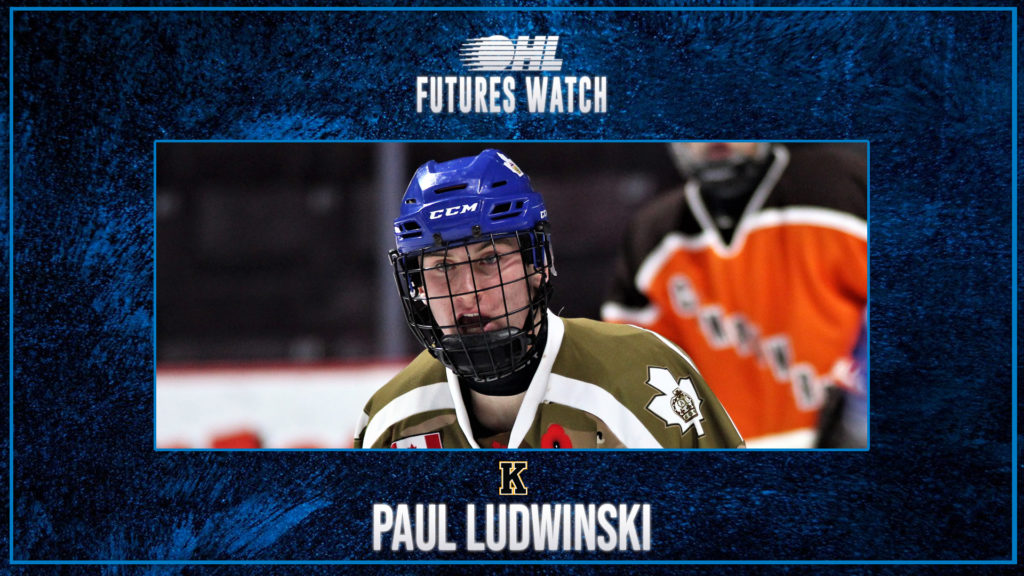 Paul Ludwinski holds close the words he heard from a friend: leadership is everything.

A self-described “lead by example” player, the fifth overall 2020 OHL Priority Selection pick hopes his leadership qualities will translate to the OHL as he prepares for his rookie season on a young Kingston Frontenacs team.

The Pickering, Ont. product finished out the 2019-20 campaign with 32 points in 31 games with the GTHL’s Toronto Marlboros and has the Frontenacs organization excited about his elite skating and strong hockey sense. Having captained the Marlboros last season, the 16-year-old forward knows a thing or two about leadership – something Frontenacs head coach and GM Paul McFarland can already attest to.

“I don’t think age matters. When it comes to being a leader, you already have those characteristics or not,” McFarland said. “Based on everything I’ve learned about Paul or heard from other people, he’s going to be a great guy for us as far as how hard he works every day and his approach to the game.”

He loves his green smoothies, has a solid pre-game routine and models his style after Nathan MacKinnon. Get to know @KingstonFronts fifth overall #OHLDraft pick Paul Ludwinski as he catches up with @sarahjeanmaher ? pic.twitter.com/B4OWgAzRK7

COVID-19 regulations have kept Ludwinski and his new teammates from meeting as a group so far, but his unparalleled work ethic and enthusiasm have gone a long way with McFarland, who has been communicating regularly with the team over Zoom.

“What we’ve noticed and love about Paul so far is how invested he is. When we ask him questions, more often than not he has the answers which shows he’s paying attention. He asks good questions when he has them which shows me how much he cares,” McFarland continued. “You can tell just by talking to Paul for a few minutes he’s a very driven young man. It’s been great to get to know him and he’s going to be a great player for the future of our program.”

Over the last six months, Ludwinski has been working hard to ensure he’s in top hockey shape for when the puck finally drops on the 2020-21 OHL season.

“Seeing myself now compared to the original start date, I’ve grown so much as a person,” he said of his progress. “I’ve gotten stronger and better as a player. It’s exciting to see how I’ve improved over a six-month period.”

He’s enjoyed the opportunity to get to know his teammates through team bonding exercises and other various forms of online communication, and has developed a close relationship with sophomore defenceman Braden Hache as well as fellow rookies Thomas Budnick and Nathan Poole. As he awaits the opportunity to skate with the Frontenacs for the first time, he can’t wait to get a close-up look at guys like Shane Wright and Zayde Wisdom; two players he’s been elated to learn from since he heard his name called out by the organization in April.

“When I see them play, they’re always going full speed and always giving it their all. They’re making plays at top speed which I think I can do well too,” he spoke of his two teammates. “They’re great players playing in a great city so I hope to take what I learn from watching them and put it into play myself.”

But until then, he’s been making the most of the situation he’s in: keeping in regular contact with the coaching staff and his teammates, asking questions where necessary, keeping up with his regular workouts in the gym in his basement, and skating with his friends outdoors.

And though the better portion of the past year has been filled with uncertainty, he’s also made a point of maintaining that positive attitude he takes pride in.

“I’m just keeping the excitement going that there will be a season and when that season comes I want to perform at my best,” he said. “I’m preparing for that day like it’s next week.”