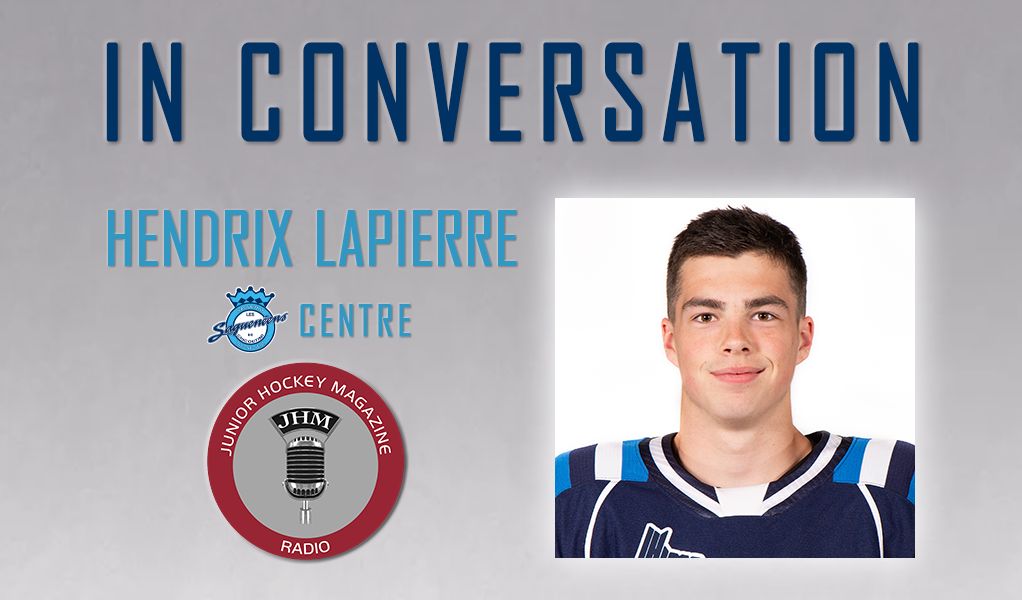 Hendrix Lapierre of the Chicoutimi Sagueneens is one of the most intriguing talents ahead of the 2020 NHL Draft.

While injuries limited the dynamic centre to just 19 games in 2019-20, he came within striking distance of point-per-game production in tallying two goals with 15 assists, building on an impressive rookie campaign that saw him finish with 45 points through 48 appearances and earn QMJHL Offensive Rookie of the Year honours as he continued to demonstrate the strong offensive abilities that originally saw him selected first overall in the 2018 QMJHL Entry Draft.

The Gatineau, Que., native recently sat down with Junior Hockey Magazine to discuss how he is working through the COVID-19 shutdown, his extensive injury rehab, and how he is preparing for the upcoming NHL Draft:

Junior Hockey Magazine: Where are you hunkering down for this quarantine and what is like for you right now?

Hendrix Lapierre: I’m at home in Aylmer, which is in Gatineau, so close to Ottawa. I am at home with my family right now, which is six teenagers so there are always things going on whether it is playing cards or going to shoot pucks outside. There are always people to do stuff with and it has been pretty fun so far. I have two little sisters and I have a younger brother, and my girlfriend is here pretty much all the time, and we have a kid from DPJ which in French is where you can adopt kids in need, so six between ages 13 and 18. It has been pretty good. My mom is pretty good with us. It’s not like she’s making grilled cheese. We ate pad Thai for dinner so it is always pretty good, and she is helping me with my school and that stuff so it has been really good so far.

JHM: You last played in the QMJHL back on November 1 and it looked like you were just ready to come back when play was shut down. How are you feeling right now?

HL: Right now I am feeling pretty good. Obviously it kind of sucks that I was about to get back into play and I was working really hard to get back in game shape just for the playoffs, and like everyone it sucks with what happened with the outbreak. I think we have a really good team and I think we would have went a long way in the playoffs. Right now we just have to stay home and make sure we can play hockey in September because that is what we like to do the most. Right now I am training and trying to get stronger.

JHM: At one point it was suggested that part of your injury you were suffering may have been from your spine. Tell us about that and how is that now.

HL: It is actually pretty good. I have been cleared 100 percent. I will have to go back to Montreal soon just to make sure everything is okay, but basically what we think is that in February I got hit, and from that hit my neck suffered from it, so every time I got checked I was always feeling a little something, and it was just too much to handle. I had headaches in the morning and it was kind of weird symptoms, so we waited to see if they would disappear, and it kind of felt weird, and then in February I went to see a specialist with my agent and that is where right away they saw the MRI where something was wrong and it was actually pretty easy to treat. It’s kind of complicated but at the end everything was good and I had really good specialists.

JHM: A lot of the time when you come through something like this you become a stronger person. You are right back at work now where you are firing pucks outside.

HL: I missed the game so much this year. I only played 19 games. Being a guy who loves the game, it is fun to watch games but there is nothing like playing it. Right now I have a shooting board and a net outside. I’m just trying to not break any windows and work on my shot.

JHM: The scouts loved what they saw from you when you had a chance to play. You had 11 points in just five games during the Hlinka Gretzky Cup last summer. What was that experience like for you?

HL: It was pretty unbelievable. I had a really good summer so I was kind of confident going into the camp. I had a really good camp there. There were a lot of good players and it was fun to meet new people and new friends. And then the (tournament) was awesome. It was two of the best weeks of my life, just going to Europe and being with all of those guys and having such success. Obviously we lost in the finals. It was kind of sad for us because we thought we had it but it was an unbelievable experience and I had so much fun there. I would love to go back there if I could go tomorrow. It was really good. I was confident there.

JHM: Our director of scouting is a big fan of yours and thinks you are a top-five pick when you return back to full health. You’re one of the best two-way players in the entire draft. What does it mean to hear somebody of his ilk say that kind of stuff about you?

HL: It’s pretty special. He did a ranking at the Hlinka and it was pretty much the first time I was ranked that high so it was really special. I am really happy to hear that. As a player who wants to play a lot, you want to be good on both sides of the ice and to play in all situations. If scouts sees the same thing, it is a pretty positive thing.