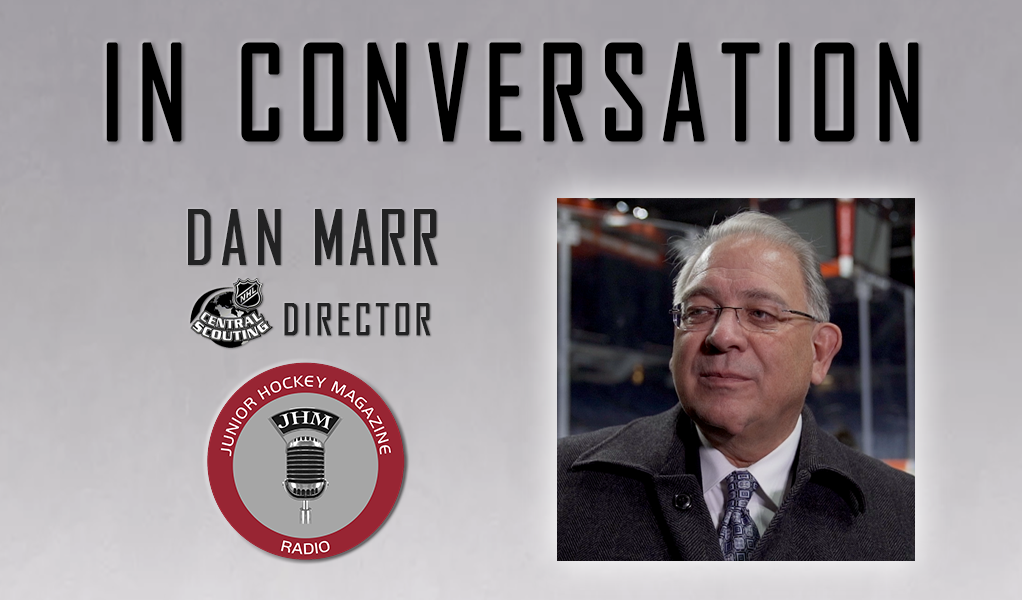 The final rankings are in.

Ahead of the 2020 NHL Draft, NHL Central Scouting led by Director Dan Marr has released its highly anticipated final rankings, an ordering of the top prospects from North America and around the world based on years of regular-season assessment and key events that decorate the hockey calendar including the World Junior Hockey Championship and the Kubota CHL/NHL Top Prospects Game.

Marr recently sat down with Junior Hockey Magazine to discuss the final rankings, how the COVID-19 pandemic impacted the process, as well as a few key talents that highlight this year’s list:

Junior Hockey Magazine: How did you wrap up your final rankings where you didn’t get a chance to see any hockey for the last number of weeks?

Dan Marr: For our staff, we missed about the last 10 days because typically we only scout during the regular season and then we get into our meetings. Our list has to be out by the time the draft lottery comes around. We didn’t get that final, last view, which sometimes helps to wrap up the season, but overall our coverage during the year was good and our guys did a lot of preparation in getting ready for our final meetings, and this is the list that we produced.

JHM: It must have been difficult to get the final numbers together because all of a sudden you can no longer meet in one room. There must have been some incredibly busy conference calls, debates, and discussions to try to bring all of these different ingredients together.

DM: We used the Zoom meeting format. We have a moderator who has the main screen and this is where we worked the list, so everyone is on with audio and the dialogue. It was helpful if you had a second device where you could read your own reports to see where other guys had players ranked.

JHM: On the upside, I guess it was easy to come up with No. 1 – Alexis Lafreniere – as we have been talking about him for about 18 months. How far ahead of the rest of the class is he going into the NHL Draft?

DM: Alexis is unique in this draft class. We have been talking about him for the past couple of years and he has continued to deliver. The fact is that up until this year he has been the youngest player on a team and he has been able to go out and impact, generate, and produce results for any team he is on, but what really makes him stand out is that he doesn’t like anyone to get the better of him. He doesn’t like to lose. He has that athletic competitive edge to his game where when he goes out there, he is just a force, he is driven. This is why we saw on the world stage and with Rimouski, when things are on the line, he is the guy who steps up and leads the charge, setting up scoring chances or getting the timely goal for his team.

JHM: Quinton Byfield is No. 2 on your list, and I don’t think anybody is discussing whether Byfield could surpass Lafreniere in the draft. We know it’s going to be Lafreniere and then possibly Byfield. But there is some discussion that five or 10 years down the road, Byfield may end up being the better NHLer. What’s your take on that theory?

DM: Everyone has their own analytics or projection on players. I don’t like doing comparables but the strength of character of this young man is so impressive, and his talent and the way he can move for a big guy is so impressive. He reminds me of Leon Draisaitl. There is just a lot of similarities to the game, so you’re talking, three or four years down the road, he could be one of the top players in the NHL.

JHM: Your top-rated defenceman is Jamie Drysdale and when I ask him who he likes to compare his game to he thought Cale Makar. Is that the comparable you would draw or is there someone else you would compare him to?

DM: Jamie is a smart kid and that is a very sound comparable. When I look at him, it is more his style of play. It is kind of unfair to do comparisons and I look at the McAvoys, the Hugheses, Makars, all of these defencemen after their draft year, they played and got a little more experience and then they were able to make the jump. They have been able to come in because they had the composure and the maturity, and he fits into this category where once he gets to the NHL, he is going to the stay in the NHL. We just don’t know if that is going to be one or two years down the road.

JHM: Jack Quinn is seventh on your list. Could he end up being the most proficient goal scorer in this year’s draft class?

DM: Jack Quinn is kind of in a special category with himself. He is in an elite group of players such as (John) Tavares and (Steven) Stamkos who have scored 50 goals in a draft year. We went around and around doing our four, five, six, and seven in the order, where Quinn could very well fit into the top five of this draft and it wouldn’t surprise anyone. He just has those natural offensive instincts. He knows how to get open and he has a scoring touch. He has a quick release, an accurate shot, but he gets to those openings and he is quick to bury his chances. He is a natural in that regard. He generates just as much as he produces. He is just a highly, highly skilled offensive threat.