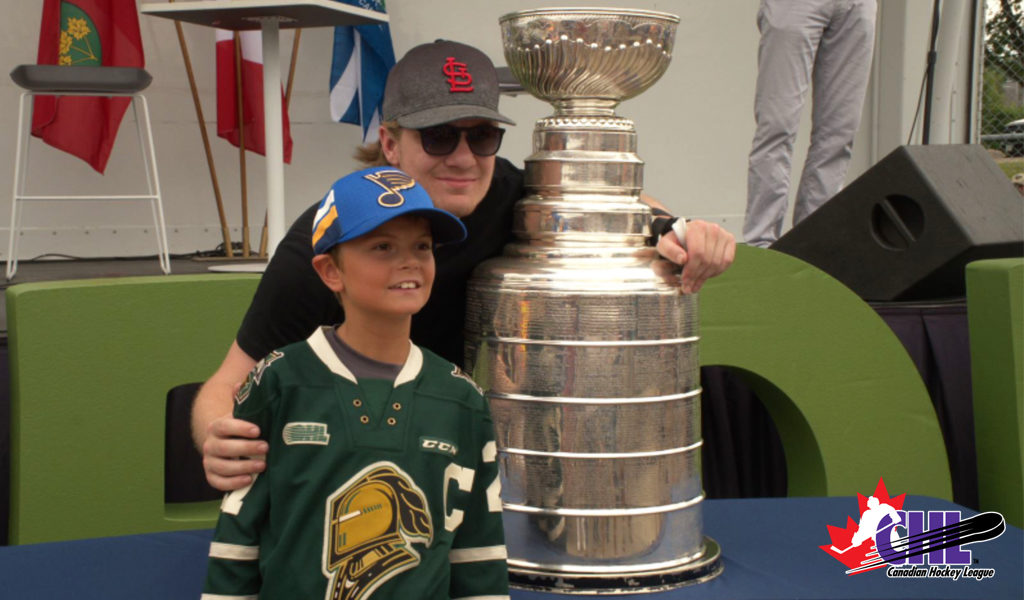 How would you spend your day with the Stanley Cup?

For Robert Thomas, the only answer was bringing it back to where it all began, in his hometown of Aurora, Ont., where as a youngster he skated with the minor midget York Simcoe Express before getting drafted 26th overall by the London Knights in the 2015 OHL Priority Selection.

With the Knights, Thomas played part of three seasons, culminating with a J. Ross Robertson Cup championship in 2016 as London downed the Niagara IceDogs to capture its fourth league title in franchise history before claiming the Memorial Cup following an incredible overtime victory versus the Rouyn-Noranda Huskies.

Our friend Robbie had a little party today 🏆 pic.twitter.com/eGV2wenWUY

Two years later, Thomas was back at it again, now part of the Hamilton Bulldogs, who in just their third season in new digs since uprooting from Belleville were crowned the OHL champions following a six-game series victory against the Sault Ste. Marie Greyhounds. Along the way, Thomas starred for the Bulldogs, leading the team in scoring with a phenomenal 32 points in 21 postseason appearances, earning him the Wayne Gretzky 99 Award as the OHL playoff MVP.

Ready for the pro ranks, Thomas joined the St. Louis Blues for the 2018-19 season – following his 20th overall selection in the 2017 NHL Draft – as he impressed with nine goals and 24 assists in 70 games to lead all St. Louis rookies in scoring. That performance continued into the playoffs where Thomas picked up another six points to help the Blues earn their first Stanley Cup championship in the franchise’s 50-plus year history.

Surrounded by friends, family and fans, the Town of Aurora was honoured to celebrate with #NHL Stanley Cup champion and Aurora native Robert Thomas today at Machell Park! Along with showing off the Cup and answering questions, Robert was also presented with a key to the Town! pic.twitter.com/zXT3fUxzLP

The first born and raised NHL player from Aurora to win the Stanley Cup, Thomas shared his story and an important message to the many youngsters and youth hockey players in attendance at Aurora Community Centre and Machell Park.

“Growing up, I played volleyball, soccer, lacrosse, and baseball,” Thomas said. “I tried to get as involved as I could in the Aurora community.

“Around 15, 16 years old is when I started focusing on hockey. There were also times growing up that I got cut from a couple select teams. That was definitely hard and it hurts you a little bit. Right after my first year in London, I didn’t make the U18 team either – I didn’t even get an invite. After that year, I really took a big step. You have to use it as motivation to push you forward.”

The hometown of Robert Thomas wouldn't be outdone by his teammate in Richmond Hill. @nhl#StanleyCup @HockeyHallFame @StLouisBlues pic.twitter.com/5qYOxsE5uL

Being back where it all began, Thomas also pointed to the many sacrifices his family made along the way, from building a backyard rink, to buying new equipment, and attending countless international tournaments, in helping him realize his hockey dream.

“My family has been huge and I definitely wouldn’t be here without them,” Thomas added. “All the support that my family has given me definitely helped me get to where I am today.”