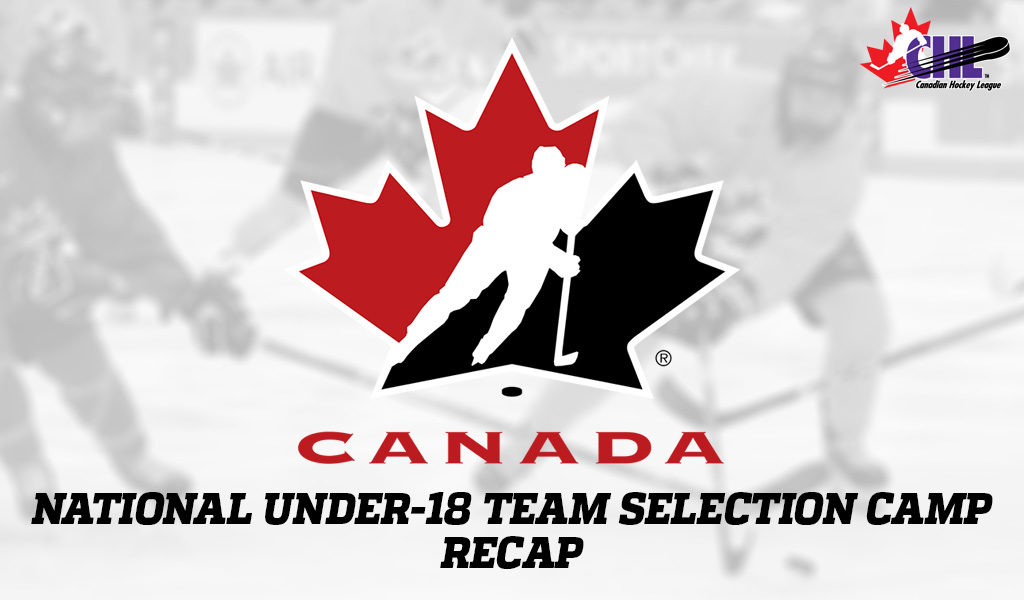 The 2019 National Men’s Summer Under-18 Team Selection Camp is now in the rearview mirror.

The camp concluded following three pre-tournament contests in which Team Canada White defeated Team Canada Red in each matchup, including Tuesday’s closer that pushed its combined goal differential to a 13-7 margin.

Leading the way for Team White was a pair of forwards in Cole Perfetti (Saginaw Spirit) and Justin Sourdif (Vancouver Giants), both of whom posted six points, with each notching one goal and five assists. The two were among 41 players from across the Canadian Hockey League competing for spots on the final roster with Team Canada at the 2019 Hlinka Gretzky Cup, beginning Aug. 5 in Czech Republic and Slovakia.

For Perfetti, his impressive camp performance follows a formidable first campaign in the Ontario Hockey League where he led all rookies with 37 goals while also topping the charts among freshmen with 74 points to earn a spot on the OHL First All-Rookie Team.

It’s not the first time Perfetti has excelled on the national stage, as the product of Whitby, Ont., was also a top performer with Team Canada White at the 2018 World Under-17 Hockey Challenge where he led the tournament with seven assists. Chosen fifth overall in the 2018 OHL Priority Selection, Perfetti is back in the spotlight again this season, earmarked for the 2020 NHL Draft.

Sourdif also shined this week, coming on the heels of his rookie season with the Giants that saw him register 23 goals and 23 assists across 64 appearances before adding another eight points in 17 playoff games to help Vancouver advance to Game 7 of the Ed Chynoweth Cup Final. The third-overall selection from the 2017 WHL Bantam Draft, the Surrey, B.C., native is eligible for the coming NHL draft in Montreal.

Meanwhile, two players shared the top spot in the goal column as Hendrix Lapierre of the Chicoutimi Sagueneens and Jacob Perreault of the Sarnia Sting each potted a trio of tallies. A native of Gatineau, Que., Lapierre hopes to make his first appearance on the national stage after an untimely injury forced him to miss last year’s World Under-17 Hockey Challenge. The 2019 Hlinka Gretzky Cup promises to be an opportunity for Lapierre – the first pick in the 2018 QMJHL Entry Draft – to draw the attention of talent evaluators ahead of next year’s NHL draft.

As for Perreault, the son of longtime NHLer and Trois-Rivieres Draveurs graduate Yanic Perreault, his three-goal performance comes after a strong first season with the Sting in which he finished with 55 points, counting 30 goals and 25 assists, in 63 outings to join Perfetti on the OHL First All-Rookie Team. Should he make the final roster, the Montreal-born forward will use the 2019 Hlinka Gretzky Cup to continue building his stock ahead of the 2019 NHL Draft.

In the crease, the top performance came courtesy of Tristan Lennox, who in two outings with Team White totaling 91 minutes allowed just two goals on 44 combined shots for an incredible .955 save percentage and 1.32 goals-against average. After appearing in 15 games with the Spirit in 2018-19, the 16-year-old was called into action for seven postseason contests in which he turned heads with a .911 save rate. The product of Mississauga, Ont., is eligible for the 2021 NHL Draft.